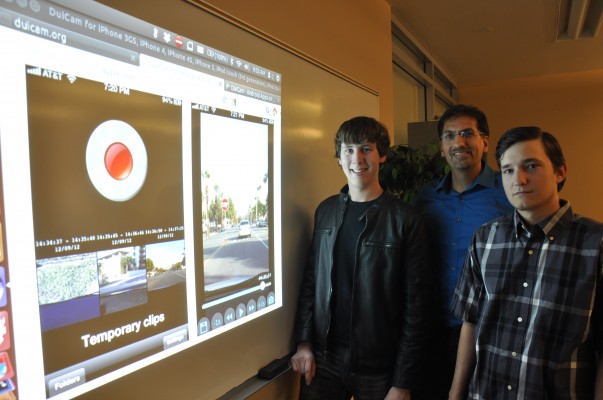 From left, the creators of the DuiCam app: Daniel de Haas, a student, Frank Vahid, a computer science professor, and Timothy Cherney, a student.

Nearly 30 Americans a day die in vehicle crashes that involve drunk drivers, according to the Centers for Disease Control and Prevention.

That number is so appalling to Frank Vahid, a computer science professor in the Bourns College of Engineering at the University of California, Riverside, that he plans to spend much of the rest of his academic career helping to eradicate the problem.

His first offering? A new, free Android and IPhone app called DuiCam that lets drivers use their cell phones to easily record erratic drivers. It has already been downloaded more than 1,000 times.

To use the app, all a driver needs is a dashboard or windshield mount. The app lets the phone constantly record what’s happening in front of the car, while deleting footage after 30 minutes so the phone’s storage isn’t overwhelmed.

If app users see what looks like a drunk driver, they can — after safely pulling over — easily replay the video and zoom in to look at the license plate and other identifying marks on the offending car, to pass on to the police. The app even makes it possible to email a snapshot or the entire video to help investigators get the driver off the road.

“I have observed many drunk drivers and seen a hit and run involving a drunk driver, and in every case we have the same situation….we see it happen, call 911 to report it and the first question the police have is, ‘What’s the license plate?’’ Vahid said. “These things happen so quickly and license plates are quite small, so it’s very hard to get it at the time. That’s why I was thinking it would be helpful to have a device that’s always recording what’s in front of the car.”

Vahid began thinking about this idea about five years ago.

“I asked myself, ‘What are the biggest problems facing this country?’ To me, drunk driving is one of the biggest and most outrageous; over 10,000 deaths a year in the U.S. caused by drunk driving and several hundred thousands of injuries. If you think about it, that’s three Sept. 11s every year, and it’s a pretty absurd situation because it’s preventable.”

Five years ago, the technology for such an app wasn’t widely available, but now virtually every cell phone has a good quality camera, and many people already have mounts for their dashboards or windshields, so they can easily use the camera feature on their phone.

Vahid has spent more than a year researching drunk driving, He talked to district attorneys, psychologists and police officers to identify products could legally and safely help tackle the problem.

Now, Vahid and UC Riverside computer science majors Timothy Cherney and Daniel de Haas, the students who programmed the new apps, are developing more features to DuiCam, such as automatic license plate recognition.  Information on their apps, including how to support future development, is available at DuiCam.org.