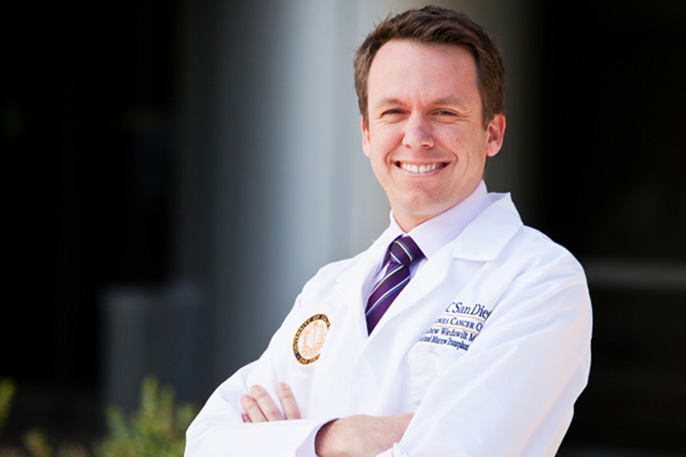 At 38 years old, Aaron Feldman was in the best shape of his life. He played first base and pitched in two competitive baseball leagues and hit the gym daily. He attributed the pain in his chest to soreness from grueling workouts. That is, until he couldn’t breathe.

“I was walking with my wife and I just couldn’t walk anymore,” said Feldman. “I thought it was bronchitis or pneumonia, but when I kept passing out I realized it was time to go to the hospital.”

A battery of tests revealed two liters of fluid in his lungs and a mass the size of a mango pressing against his lungs and near his heart. Feldman was diagnosed with acute lymphocytic leukemia (ALL), a rare form of blood cancer or hematologic malignancy. According to the National Cancer Institute, 1.5 percent of men and women will be diagnosed with leukemia in their lifetime.

“It was presented to me that my cancer was very serious,” said Feldman. “I learned of a clinical trial at Moores Cancer Center at UC San Diego Health that offered a higher probability of success. All I heard was that I had less chance of dying on this trial. There was no decision to be made. I enrolled.”

The phase two clinical trial Feldman enrolled in is led by Matthew Wieduwilt, M.D., Ph.D., assistant clinical professor of medicine at the UC San Diego School of Medicine. The trial builds on the standard treatment with a specific goal of preventing relapse in the central nervous system — a common occurrence with ALL. It is one of three clinical trials currently enrolling participants as part of the University of California Hematologic Malignancies Consortium, a first-of-its-kind research group that brings together the five UC health campuses conducting clinical studies for cancer patients. The consortium currently has four additional clinical trials planned for 2017.

In 2014, Wieduwilt was developing a new clinical trial for hematologic malignancies, but these cancers are so rare that the only way to enroll enough patients to make the trials successful was to collaborate with other academic institutions. He was working with two other UC campuses but needed at least one more to join the effort to recruit enough candidates. That’s when the idea of the Hematologic Malignancies Consortium developed.

“Even at the largest UCs, it is nearly impossible to do a single site clinical trial and even if it is done, it can take years for completion. I have seen many studies fail or progress slowly, something we can’t afford when searching for new cancer therapies,” said Wieduwilt. “So I proposed a consortium with all the UC sites to develop successful clinical trials that allows experienced and young investigators to collaborate. More importantly, the consortium provides patients access to novel clinical trials and experts all over California. They don’t have to travel.”

On Sept. 23, investigators from the UC campuses will be in San Diego for the consortium’s first research symposium to be held at the Green Acre Convention Space in La Jolla. Researchers will discuss the latest therapies, basic research and perhaps spur ideas for new trials. The event is open to scientists, medical experts, students and anyone interested in hematologic malignancies. The afternoon sessions highlight general topics and clinical trials that might be of particular interest to patients and the community.

“Hematologic malignancies are life-threatening diseases that require specialized care and treatment,” said Wieduwilt. “Promising clinical trials can impact current therapies for the better in rare diseases. It’s important to work collaboratively to move new therapies forward and provide patients access to these therapies wherever they live.”

Feldman feels lucky that he enrolled in a clinical trial and has had a good response. At one point, he needed a microphone to speak and was dizzy if he spoke too long. Today, despite ongoing treatment, he’s back to running his business, True Photography, and even took a driving trip with his wife from Atlanta to the Carolinas — with stops at labs along the way to check his blood count.

He says treatment was not easy on him. He continues to feel numbness in his feet and has not returned to gym work outs just yet but he said he’s living a pretty normal life.

“I’m cautious about working out my upper body, but I did have my first at-bat recently with my baseball team,” said Feldman. “I struck out. It was awesome. It was probably the most exciting strikeout I’ve ever had. Never have I had so many people cheer for me when striking out.”