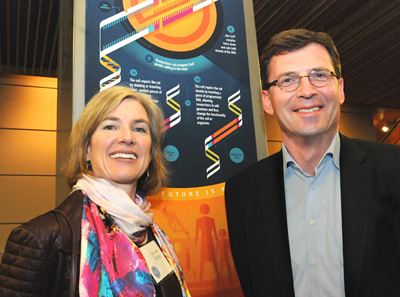 Biologist Jennifer Doudna, left, has been named among Time magazine's 100 most influential people.

Time magazine has named Jennifer Doudna, a professor of molecular and cell biology, to its 2015 list of the 100 most influential people in the world.

The list, now in its 12th year, recognizes the activism, innovation and achievement of the world’s most influential individuals.

A Howard Hughes Medical Institute investigator at UC Berkeley, Doudna has received numerous honors and awards for her discovery of a revolutionary DNA-editing technique that has upended the world of genetics. The technique, called CRISPR-Cas9, exploits precisely targeted DNA-cutting enzymes from bacteria to snip and edit human and animal DNA, making it much easier to create animal models of disease and possibly correct human genetic disease via gene therapy.

Her colleague and co-discoverer, Emmanuelle Charpentier of the Helmholtz Center for Infection Research and Umeå University, was also named to Time‘s 100 list.

“Their technique, CRISPR-Cas9, gives scientists the power to remove or add genetic material at will,” wrote geneticist Mary-Claire King in a summary of their work. “Working with cells in a lab, geneticists have used this technology to cut out HIV, to correct sickle-cell anemia and to alter cancer cells to make them more susceptible to chemotherapy. With CRISPR-Cas9, a scientist could, in theory, alter any human gene. This is a true breakthrough, the implications of which we are just beginning to imagine.”

King discovered the BRCA1 breast cancer gene while a professor at UC Berkeley in the 1990s, before moving to the University of Washington, Seattle.

Time editor Nancy Gibbs several years ago explained that “The Time 100 is a list of the world’s most influential men and women, not its most powerful, though those are not mutually exclusive terms …. While power is certain, influence is subtle…. As much as this exercise chronicles the achievements of the past year, we also focus on figures whose influence is likely to grow, so we can look around the corner to see what is coming.”

The full list and related tributes to the Time 100 appear in the April 27 issue of the magazine, available online today (April 16) and at newsstands and for tablets on Friday, April 17.