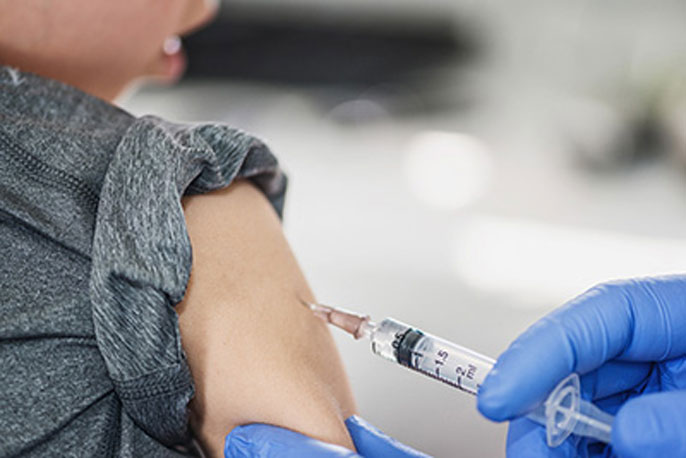 Flu vaccines are updated every year to match the evolving strains of the influenza virus, but researchers hope to develop a universal vaccine that would be effective against all strains.

The current flu season is shaping up to be a particularly severe one, with the Centers for Disease Control and Prevention (CDC) reporting 2,900 deaths from flu as of the end of December. Vaccines offer protection from this threat, but getting the flu vaccine every year can be a hassle, and many adults go without it. In fact, the CDC estimates that only about 37 percent of the adult population received the flu vaccine in 2018, a decline from previous years.

But what if people only needed to be vaccinated once to receive many years of protection? This type of “universal vaccine” is what Rebecca DuBois, assistant professor of biomolecular engineering at UC Santa Cruz's Baskin School of Engineering, calls the “holy grail for influenza,” and it may be closer than you think.

DuBois is part of the Center for Influenza Virus Research for High Risk Populations (CIVR-HRP), a research group led by the University of Georgia that is working to develop a universal flu vaccine. The center is part of the new Collaborative Influenza Vaccine Innovation Centers (CIVICs) program funded by the National Institutes of Health (NIH). The University of Georgia has received an initial award that could total as much as $130 million if all contract options are exercised. DuBois’ role on the project, funded by an initial $1.5 million sub-award, will use structural biology to visualize the vaccine candidates that are being designed by her collaborators in the group.

“It’s something that wouldn’t have been possible in the past,” DuBois says.

She explains that this is because the previous method of creating vaccines required using strains of the virus that existed in nature and were always evolving. However, with the recent development of vaccines that are made in lab cultures rather than with the viruses themselves, researchers believe that it is now possible to build a “rational” vaccine. DuBois defines a rational vaccine as one that is engineered based on an understanding of how vaccines work on a molecular and immunological level, as opposed to one that simply uses inactivated or weakened strains of an existing virus.

“We’ve always had to use whatever strains already existed out there in the world and generate vaccines against them, but now we can engineer chimeric vaccine antigens that contain mixed and matched parts from different virus strains,” she says.

Getting the flu is inconvenient for many of us, but for some populations it can be dangerous and even deadly. DuBois hopes the work she is doing will help protect these more vulnerable populations.

“Elderly people, obese people, pregnant women, children, and people with health problems resulting in immunodeficiency have the highest risk of developing severe influenza disease, so making a vaccine that provides improved protection for a longer period of time would be great,” she says. “What I really like about working with the CIVR-HRP research group is that their focus is on subgroups of people who are more susceptible to influenza, and that we will be developing models to test flu vaccines in different ways to make sure they work for all kinds of people.”

Since she arrived at Baskin Engineering six years ago, DuBois' focus has been to understand how the immune system responds to virus infections and use that information to develop next-generation vaccines, particularly for illnesses that impact children. Developing a new flu vaccine is one of three major NIH-funded projects that DuBois has going on in her lab this year, all of which have something to do with vaccine development.

“The main theme in my lab is childhood viruses that we don’t have vaccines for yet,” she says. “I have two kids, and I see how often they still get sick, especially in the first couple of years. Even though we already have an impressive vaccine schedule that protects them from so many things, we still need more vaccines.”

DuBois came to the UC Santa Cruz with a Career Award that funded her study of human astrovirus, a stomach bug that primarily affects children and for which there are no current treatments. In February 2019, she received a 5-year, $1.7 million NIH grant to continue researching the structure of the virus, which she hopes will lead to the development of a new vaccine.

“We as adults don’t get astrovirus infection because we have had it in the past, so we are immune,” she explains. “That tells me that we can develop a vaccine if we understand how the immune system is responding.”

DuBois says she is thrilled to have this new funding, which is a validation of the hard work she has been doing on the astrovirus vaccine for the last six years. “I started my lab on this project, so it’s really research that has been ongoing for my entire time here,” she says. “I am really excited.”

DuBois also recently received a one-year grant to study respiratory syncytial virus (RSV), a nasty virus that infects the respiratory tract and is especially bad for babies. According to the CDC, an estimated 57,000 children younger than 5 years old are hospitalized due to RSV infection in the United States each year. DuBois’ goal is to create vaccine antigens that will be able to train our immune systems to fight against the virus.

“Our approach is similar to that in the other grants, in that we are going to be designing new vaccine antigens in a way we couldn’t engineer with the traditional way of making vaccines,” she explains.

The universal flu vaccine project is funded by the National Institute of Allergy and Infectious Diseases, a component of the NIH, Department of Health and Human Services, under contract 75N93019C00052.