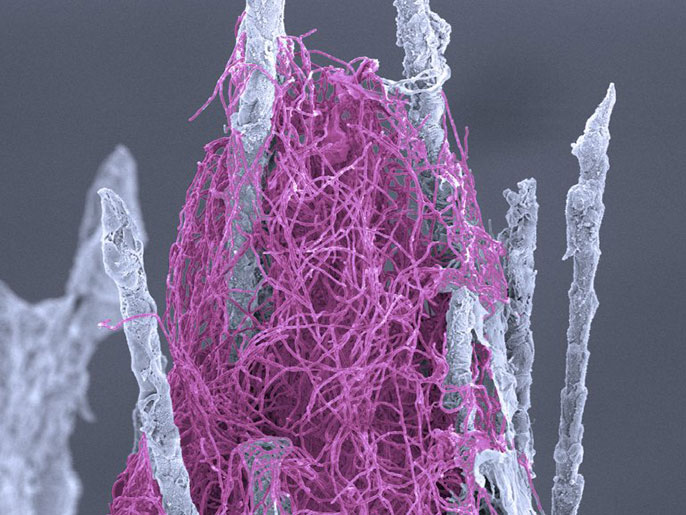 A thick tangle of the fungus Pseudogymnoascus destructans (purple) that causes white-nose syndrome in bats is shown here growing on mouse body hair.

Scientists at UC San Francisco and Brown University have figured out the likely way that white-nose syndrome breaks down tissue in bats, opening the door to potential treatments for a disease that has killed more than 6 million bats since 2006 and poses a threat to the agricultural industry.

In less than 10 years, white-nose syndrome has spread to 26 states and five provinces in Canada, killing almost all of the bats in some locations. Scientists say it represents one of the steepest declines in North American wildlife of the last century. It is a particular threat to the agricultural industry, which relies upon bats to control insects. A single bat eats up to 4,500 insects, the equivalent of its body weight, each night.

White-nose syndrome is caused by a fungus — Pseudogymnoascus destructans — which was imported from Europe and thrives in the cold caves where bats hibernate. European bats have adapted to the fungus, but American bats have no defenses, and it breaks down the tissue in their wings while they sleep.

The fungus feeds itself by exporting digestive enzymes and then importing the break-down products, in a process called extracellular digestion. To understand the digestive capability of this fungus, the scientists first identified all of the exported enzymes and then isolated the one most likely causing tissue destruction.

They found an enzyme that could digest collagen, which forms the support structure of tissue. They named this enzyme Destructin-1, and searched through the scientific literature to identify inhibitors that could block its action.

They tested one called chymostatin and found that it protected most — about three-quarters — of the collagen from being broken down, but not all of it.

“It suggests the fungus is exporting other substances that can degrade collagen,” said Richard Bennett, Ph.D., an associate professor in the Department of Microbiology and Immunology at Brown University.

The group plans to screen other compounds to find more effective blockers of Destructin-1. Their studies, published today (May 4) in Proceedings of the National Academy of Sciences, were performed using a commercial source of collagen, but they plan to do more work in bat tissue and to collaborate with researchers who work with living bats.

Anthony O’Donoghue, Ph.D., an associate specialist in the Department of Pharmaceutical Chemistry at UCSF who specializes in studying enzymes, said the technology that made it possible to rapidly identify and then characterize all the protein-degrading enzymes that the fungus exports has only been available for a couple of years. He said the work he did with co-first author Giselle Knudsen, Ph.D., an assistant professor in the Department of Pharmaceutical Chemistry at UCSF, is the most sophisticated analysis yet of how a fungus destroys tissue.

It’s not yet clear whether these findings will be enough to save many bats, some species of which may soon be threatened with extinction if the fungus continues to spread. Bennett said ecologists may have to try a variety of methods to protect bats from further destruction.

Other authors of the study include Chapman Beekman, B.S., and Jenna Perry, B.A., of Brown University; and Alexander Johnson, Ph.D., Joseph DeRisi, Ph.D., and Charles Craik, Ph.D., of UCSF.