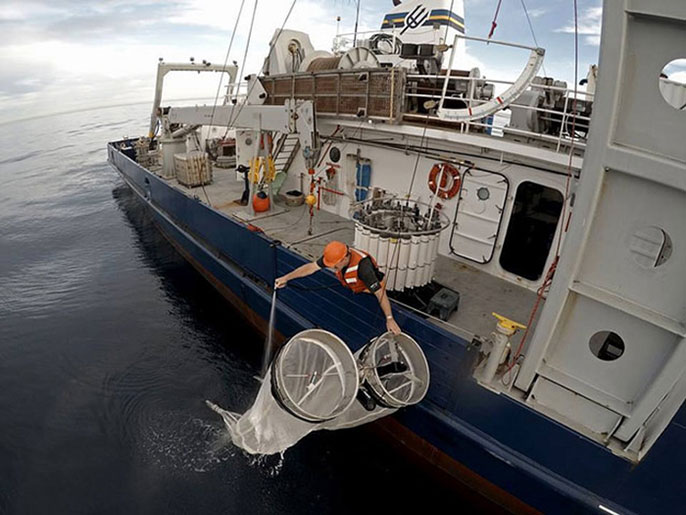 The California Current is home to many marine animals, including marine fishes, which are the most diverse vertebrates on Earth and critical to marine ecology. Two fishery-independent data sets reveal strikingly similar trends of wide-ranging declines in fish populations in the California Current.

The data show that fish abundance from both studies has declined sharply since 1970, with a 72 percent decline in overall larval fish abundance in the CalCOFI data set and a 78 percent decline in fishes from the PPI sampling. Although there was limited overlap in species between the nearshore PPI samples and the more offshore CalCOFI sampling, the correlation between the two time series was about 0.85. The study was published in the Oct. 28, 2015, issue of Marine Ecology Progress Series.

“It is notable that these two very distinct data sets tell us that the larval fish populations collected by CalCOFI and near shore fish species observed by PPI data are both declining at nearly the same rates,” said Scripps researcher John McGowan.

CalCOFI was formed 70 years ago. Originally designed to study the ecology of the west coast sardine population, the ongoing CalCOFI surveys of the physical and biological oceanography and fisheries off California is today the longest-serving multi-disciplinary ocean observation program in the world. CalCOFI is a unique partnership led by Scripps Oceanography, NOAA Fisheries Service, and the California Department of Fish & Wildlife.

“The similarity in trends between the two data sets is amazing given the differences in life history strategies monitored by the two programs. While the CalCOFI program samples larval fish, several of the species integral to the PPI data set were surfperch, fishes that do not have a larval stage,” said Eric Miller of MBC.

“The CalCOFI data were originally used to track sardines and now track the larval abundance of a broad range of fish species in the California Current system. Larval fish abundance is a strong indicator of adult fish populations, and the regular CalCOFI sampling indicates decreased abundance primarily for cool-water species,” said Koslow, a Scripps researcher and first author of the paper.

The study concludes that changes in the California Current ecosystem are the likely cause of this decline in fish abundance. Overall, fishes with an affinity for cool-water conditions, such as northern anchovy, Pacific hake, and several rockfish and midwater fish species are among the most abundant in the ecosystem. Over the 30-year period, these have declined most dramatically off southern California. However, whether this is due to a movement of cool-water species northward or an overall decline throughout the California Current is a key question for future investigation.

“Changes in temperature, current, or other factors do not cause day-to- day changes in fish populations, but over a period of time, these changes are observed and reinforce the hypothesis that the California Current is changing,” said McGowan.

“The fish populations in the California Current have declined for four decades with no signs of reversal. This reflects large-scale change in environmental conditions, potentially including the transport of the California Current, salinity, zooplankton productivity, and other factors,” said Koslow.