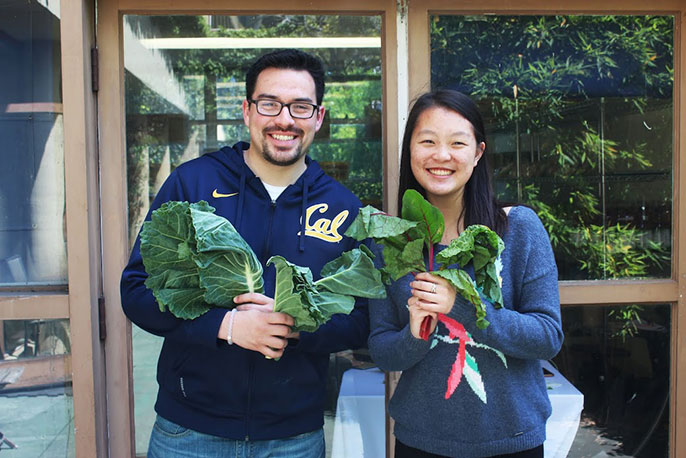 Fresh produce is among the healthy, organic items available at the UC Berkeley Food Pantry, which is open Thursday of finals week from noon to 4 p.m.

The term “starving student” often is an exaggeration used to describe anyone in college with limited cash. But it’s no figure of speech for millions of Americans, including undergraduate Alejandra Tovar, who knows chronic hunger firsthand.

The first in her family to attend college, she transferred to UC Berkeley in 2012 from Sacramento City College. On her own, and shocked by Bay Area prices — especially for housing — Tovar struggled, despite financial aid, to pay bills. She worked three part-time jobs and eventually found lower rent in Rodeo, 16 miles and two long bus rides away.

“Food became the last priority on my list,” says Tovar, whose daily diet was oatmeal for breakfast, black coffee all day, and soup or a sandwich for dinner. “But it’s a big, big necessity for students’ success.”

A comprehensive new toolkit recently unveiled at Berkeley is helping Tovar and other students with food insecurity and is the first step in a six-year strategic plan that organizers hope will create a model for other universities across the country.

A campus food pantry for all students is open year-round and has served about 1,400 people to date, but the plan – designed to provide holistic nutrition security — also includes emergency funds and loans, help creating a spending plan, tips on eating for $5 a day and a donation program for any student’s unused dining hall meal points. (Points must be donated to dining hall cashiers by May 17.)

“Food insecurity is a national problem, and it’s impacting our students just like it’s affecting other Americans,” says Ruben Canedo, a campus research and mobilization coordinator leading the UC Berkeley Food Security Committee, whose members represent a cross-section of students, staff, faculty and administrators. “Historically, hunger and malnourishment have been invisibilized, but we’ve come together as a campus to say we can’t accept that reality, and that’s huge. Food pantries are often isolated at institutions, with students helping students, or with only staff helping students in need.”

In its 2014 Hunger in America report, Feeding America, a nationwide network of food banks, said it served 46.5 million food-insecure people, 55 percent of them between the ages of 18 and 59. One in 10 of the adults was a student, 31 percent were choosing between education or food and 57 percent between housing or food, and 79 percent purchased unhealthy food.

For three years — 2010, 2012 and 2014 — nearly 23 percent of students in the 10-campus UC system have reported on the UC Undergraduate Experience Survey (UCUES) that they skipped meals to save money. The frequency of the skipping ranged from “somewhat often” to “very often.”

“Hunger went to the next level after the Great Recession, food insecurity skyrocketed,” says Canedo, who also co-chairs food security efforts by the 10-campus UC system as part of President Janet Napolitano’s Global Food Initiative. “At first, we were institutionally blind to the problem, because hunger brings a lot of shame and embarrassment. Students weren’t acknowledging their needs.”

At University Health Services, Karen Gee, a health educator and coach at Berkeley for 30 years, says she began noticing a rise in the number of students with hunger issues around 2009.

“Not a single student I’ve ever seen has said, ‘I’m broke, and I can’t afford food.’ Most begin by talking about their fatigue, lack of concentration, or repeated illnesses,” says Gee. “It wasn’t until I started asking about various aspects of their lifestyle that they would share with me that they were food insecure, or just plain hungry. They had been suffering in silence due to stigma around hunger, especially as college students.”

Using her own money, and donations from friends, Gee began providing modest grocery gift cards to hungry students. Until 2014, there was no food pantry on campus — the Bear Pantry in University Village is primarily for student-parents, and community food banks have limited programs and aren’t a convenient distance from campus.

Eventually, Gee’s observations and concerns, combined with those from co-workers and the UCUES statistics, helped sound the alarm that led Vice Chancellor for Equity and Inclusion Gibor Basri and Vice Chancellor for Student Affairs Harry Le Grande to call for a campus-wide food security committee.

When Canedo sought members for the committee, he discovered dedication from every corner of campus — from the Berkeley Food Institute to the Associated Students of the University of California (ASUC) to the Office of Planning and Analysis — and from several off-campus organizations, like the Alameda County Community Food Bank.

Cal Dining, for example, now helps the pantry procure healthy, nutritious food and gives it access to bulk pricing. Financial Aid and Scholarships created a Food Assistance Program for those who have exhausted their financial aid packages. The student body voted to devote three years’ worth of fees to support the pantry and other food security-related causes. The UC Gill Tract Community Farm runs a monthly Harvest Day when students who pitch in to farm can take produce home.

“If we pride ourselves at Berkeley for enrolling a diverse student body, then we can’t shy away from helping them when they’re here,” says committee member Anne De Luca, associate vice chancellor for admissions and enrollment.

Another key contributor at Berkeley to food security work is outgoing UC Student Regent Sadia Saifuddin, a senior who, in 2013, authored a bill that won ASUC support for a campus pantry. She also has been the student leader on the systemwide UC Food Security and Access Subcommittee. Earlier this spring, Napolitano provided each of the 10 campuses with $75,000 to support food security and access for students.

News of the array of Berkeley food security resources is being shared at new student orientation and welcome events and through a recent email to all students. A new food security website is in the works, and the pantry’s Facebook page is growing a fan base. And a search for donors is under way to sustain the pantry beyond the student body’s funding guarantee of three years. Currently, the pantry serves 40 students a week, but Canedo says that number could double or triple as news of the program spreads.

One things the pantry won’t be short on is volunteers, many of them the very students stopping by for free rice, pasta sauce, fresh chard and apple juice.

“I’ve been using the pantry when I get into tough financial circumstances,” says Miriam Rosas, a first-generation college student from Los Angeles who also volunteers there. “I want to be part of a program that helps students so much.”

“The overwhelming reaction is not shame, but gratitude,” adds De Luca. “That’s a very Berkeley response.”