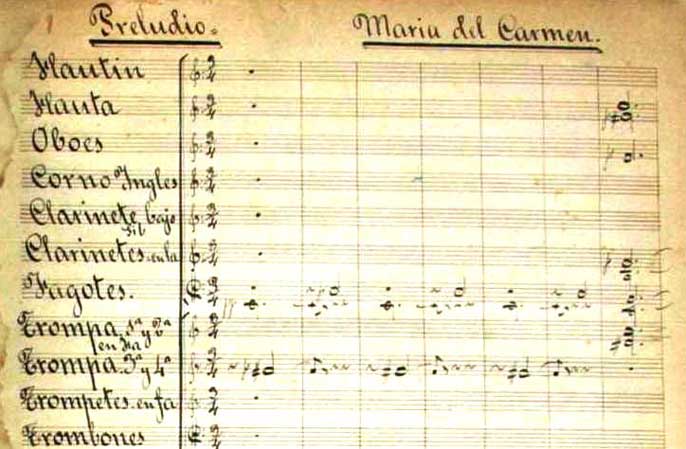 Walter Clark searched for two decades for the original version of the opera “Maria del Carmen” by Enrique Granados.

Walter Clark was a graduate student researching his dissertation when he stumbled upon a mystery that would haunt him for more than two decades: What happened to an unpublished opera written by Enrique Granados, one of Spain’s greatest composers, at the turn of the 20th century?

The answer would elude Clark — now a professor of music and director of the Center for Iberian and Latin American Music at the University of California, Riverside — until 2009, a tale as riveting as the plot of any opera, with the three-volume “Maria del Carmen” surviving a torpedo attack, economic collapse in Spain, and a warehouse fire in New York.

“I have been a lover of Granados’ music since I was a teenager and have played some of it,” Clark said. “‘Maria del Carmen’ is beautiful music, inspired by the folk music of the Spanish countryside.” Although Granados is best-known as a composer and pianist, Clark said his work is easily arranged for performance by guitar, which the UCR scholar plays.

Granados, born in 1867, composed “Maria del Carmen” in 1898, the year Spain and the United States went to war. It premiered in Madrid to such acclaim that Queen Maria Cristina awarded Granados the Charles III Cross for his work. The opera — a love triangle set in a Spanish village in the region of Murcia — was later revised for subsequent productions, but was never performed in its original version again.

As Clark began his research for a 2006 biography of Granados — “Enrique Granados: Poet of the Piano” (Oxford University Press) — he discovered family letters and other documents that helped piece together part of the story.

In January 1916, Granados and his wife, Amparo, left their six children in Barcelona and boarded a ship for the United States, where the New York Metropolitan Opera was scheduled to premiere another of the composer’s operas, “Goyescas.” Hoping to interest the Met in performing “Maria del Carmen” as well, Granados took his only copy of the opera with him. The Met declined his offer.

Granados and his wife delayed their scheduled to return to Spain when President Woodrow Wilson requested a performance at the White House. As a result, they missed their ship sailing directly to Spain and boarded a later ship bound first for England, then France.

The couple survived the Atlantic crossing. But they drowned in the English Channel, within sight of the French coast, when a German submarine fired a torpedo, blowing off the bow of their boat. Most of the other passengers — and the opera — survived. After the couple’s belongings were returned to their home in Barcelona, the opera was revised and occasionally produced, Clark said.

In 1938, one of Granados’ sons sold the original opera to a prominent New York musician and publisher for $300 to raise money for the Republican cause in the Spanish Civil War. Other family members wanted it returned. The question of ownership remained the subject of litigation for decades until 1970 when the opera was reported destroyed in a warehouse fire in New York.

“I wondered if it was really destroyed,” Clark said. “No one had done a proper inventory after the fire. When I was researching my book I contacted the grandson of the man who had purchased ‘Maria,’ and he kept looking.”

Finally, in fall 2009, Clark received word that all three volumes had been found. With funding provided by Special Collections & University Archives of the UCR Libraries, American pianist Douglas Riva and himself, Clark eventually traveled to New York to acquire the composition.

“No one has heard this performed since 1899,” Clark said. “It is being published now by Tritó, the same company that will record it. It will be performed in various places in Spain next year, and I will be there. This is a 20-year detective story with a happy ending.”