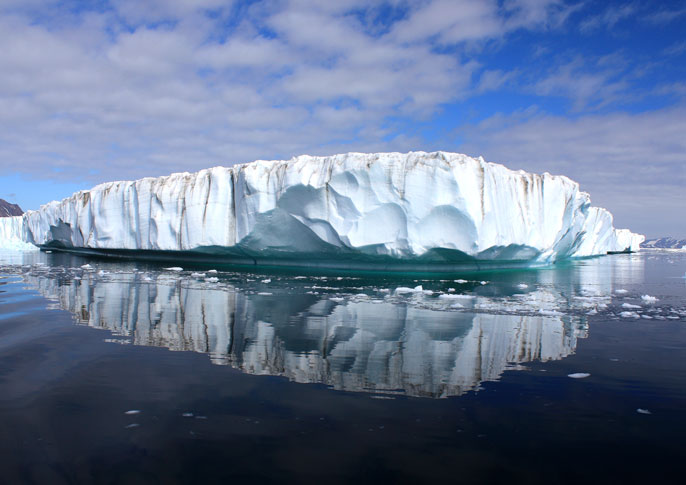 About 14,000 years ago, the southwest United States was lush and green, home to saber-toothed cats and mammoths. Meanwhile, the Pacific Northwest was mostly grassland.

That all changed as the last ice age was ending. Climate changes might be expected with the melt of a global freeze, but what’s surprising is how quickly climate and rainfall patterns changed. According to research published Nov. 22, the collapse of an ice sheet in what is now western Canada triggered a reorganization of the jet stream over the course of about 100 years — a blink of an eye in geological time.

Previous research showed that these changes had occurred, but didn’t address why or the speed at which they happened, said Juan Lora, lead author of the paper and a UCLA postdoctoral fellow.

“Basically, in a human lifetime the climate changed dramatically,” Lora said. “There was a very steady and stable configuration for tens of thousands of years until this moment, and then it suddenly changed to the climate we have now.”

The jet stream shifted north by nearly 500 miles, taking moisture and rainfall from the Pacific with it. That transformed the Pacific Northwest from grassland to the grand forests we now have, while what was once a lush, green Southwest U.S. dried up and became mostly desert. Large animals that relied on that lush ecosystem such as mammoths and saber-toothed cats went extinct over the next few thousand years, leaving behind only fossils and bones in places like the La Brea Tar Pits in Los Angeles.

So how do these findings relate to today’s man-made climate change?

“We know that the jet stream is changing, but the change seems to be a bit more gradual,” Lora said. “The point we’re making is that ice distribution has a very direct effect on the climate of the larger region.”

While we might not see a shift of the same magnitude, parts of the world could see relatively rapid changes as ice melts in polar regions from global warming. Large geographic features like glaciers, Arctic sea ice and ocean temperatures are all major drivers of weather patterns. This study demonstrates that major changes in ice and temperatures could cause abrupt effects farther away.

Co-author Aradhna Tripati, a professor with UCLA’s Institute of the Environment and Sustainability who initiated the study, echoed this concern. She pointed to recent news that Arctic air temperatures are 38 degrees warmer than usual for this time of year, preventing the usual formation of sea ice.

“It’s not just climate change in the Arctic that can affect us here and that we’re worrying about,” Tripati said. “Climate change elsewhere — whether it’s overseas in Europe, China or even Antarctica — can also affect us.”

Comparing models to the past

To reach their conclusions, Tripati and Lora looked at data on past rainfall patterns, lake sediments, ice cores, the chemistry of deposits from caves and fossils from plants. They compared that evidence to computer climate model simulations of what might have happened. These records helped tell the story of the rapid climate shift.

They also serve as an important check on the uncertainty of climate models — the main tools scientists and policy makers use to predict future climate outcomes.

“Observations of past climate can be incredibly useful as a tool for verifying that a climate model’s projections are accurate,” Tripati said. “We need to start picking apart which individual models are doing a great job and why, and maybe even eliminate models that aren’t doing as well.”

Rapid changes in weather patterns would have major effects on the West Coast of North America, where food, water and energy systems are often stretched to capacity to support the tens of millions living in the region.

Ecological complexity can lead to surprises

Daniel Swain, author of the California Weather Blog and a UCLA postdoctoral fellow, said the findings are particularly interesting in the context of California’s ongoing drought.

“This paper presents compelling evidence that atmospheric conditions over the North Pacific can shift abruptly and dramatically in response to incremental changes in the broader Earth system,” Swain said. “It serves as a reminder that the Earth system is full of complex and non-linear interactions — which can sometimes lead to climate surprises.”