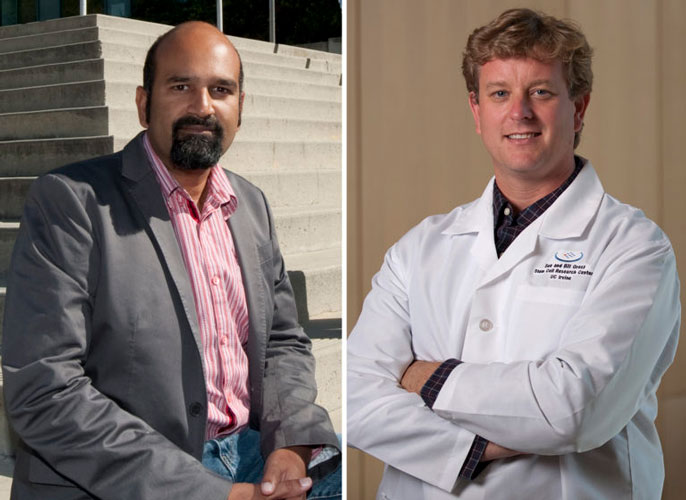 Sunil Gandhi (left) and Mathew Blurton-Jones, both UC Irvine associate professors of neurobiology and behavior, have been awarded $100,000 to investigate whether sex-related differences in brain cells called microglia can explain the huge gender disparity in Alzheimer’s disease.

Two-thirds of the 5.5 million Americans with Alzheimer’s disease are women, and without effective prevention and treatments, that number will triple by 2050. Now, thanks to an innovative partnership, two UC Irvine researchers have been awarded $100,000 to dig into why such a huge gender disparity exists.

Sunil Gandhi and Mathew Blurton-Jones, both associate professors of neurobiology & behavior, will explore tiny brain cells called microglia to determine whether outside stressors or intrinsic genetics make them a key culprit in unleashing the disorder in females.

“Microglia are the brain’s primary immune cells and play important roles in the clearance of toxic proteins, including the beta-amyloids that accumulate in Alzheimer’s disease,” Blurton-Jones explained. “This generous funding will allow us to investigate whether differences between female and male microglia contribute to the increased prevalence of the disease in women.”

Enabling such research was the goal when UC Irvine’s Institute for Memory Impairments and Neurological Disorders and Maria Shriver’s Women’s Alzheimer’s Movement teamed up last year to host the “December to Remember” fundraising event, which brought in $280,000. They announced the inaugural $100,000 recipients after a grant competition focused on the function of sex in the disease. (The remaining $180,000 will be used for future research.)

“Women are at the epicenter of the Alzheimer’s crisis. That’s why we must be at the heart of the solution,” said Shriver, whose father, Sargent Shriver, suffered from the progressive ailment, which causes memory loss and other symptoms.

Like Shriver, Blurton-Jones said his drive to explore Alzheimer’s is partly personal: His grandfather had it, and as a doctoral student, he saw firsthand at his adviser’s clinic how widespread and challenging the disease is for both patients and caregivers – the latter also mostly female.

The idea to support research through a grant competition was the brainchild of Shriver and UC Irvine MIND director Joshua Grill, advancing UC Irvine's reputation as a major hub for investigating sex disparities in neurodegenerative diseases. UC Irvine is the only federally funded Alzheimer’s Disease Research Center in Orange County and one of just 10 centers funded by the California Department of Public Health.

Grill noted that time is of the essence in slowing a growing epidemic. “Alzheimer’s is the sixth-leading cause of death in the United States and the third-highest cause of death in Orange County. Until better treatments are found, it’s on track to continue to disproportionately affect women,” he said.

Prominent experts from Stanford University, the University of Southern California and the Alzheimer’s Association reviewed grant applications and selected the one from Gandhi and Blurton-Jones.

They proposed an exciting set of experiments to probe potential differences in microglia interactions in the Alzheimer’s brain utilizing technology their labs developed. Skin cells donated by men and women at the UC Irvine ADRC will be used to generate induced pluripotent stem cells, which will then be differentiated into microglia. These human brain cells will be injected into male and female mouse models with the disease and visualized via state-of-the-art in vivo microscopy techniques pioneered in the Gandhi lab.

“This grant lets us immediately begin research that may be vital to furthering the field’s knowledge of microglia and their part in Alzheimer’s,” Gandhi said. “We are grateful to Maria Shriver’s WAM and to UC Irvine MIND for this opportunity to make major strides toward understanding the role of sex in this devastating disease.”

The award could help the investigators win much larger grants from the National Institutes of Health on a critical topic. WAM and UC Irvine MIND plan to hold grant competitions at least once a year. The next “December to Remember” gala will take place on Saturday, Dec. 1, at the Balboa Bay Resort.

“This program allows you the freedom to explore, and it’s really hard to find funds to do that,” said Andrea Wasserman, chief administrative officer of UC Irvine MIND’s research unit. “You can take risks in a particular corner to find good data that could prove enormously valuable.”