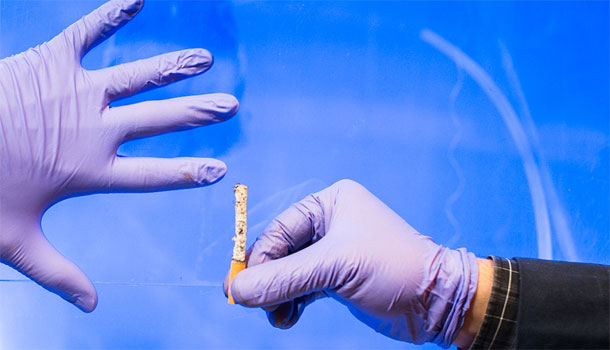 UC’s Tobacco-Related Disease Research Program administers the California Cancer Research Fund, made possible by taxpayers who donate money by checking line 413 on their state income tax forms. TRDRP will utilize that fund to focus on lung cancer screening, including new tests to detect the disease in its early and treatable stages.

Helping people avoid or quit smoking are sure-fire ways to slash the incidence of lung cancer. But systematic screening of heavy smokers for early stages of lung cancer could also save many thousands of lives.

As yet, there is no national policy for lung cancer screening, as has long been established for breast and prostate cancer, even though lung cancer kills more people every year than these other diseases combined. Concern remains about high percentages of false positives — results that indicate possible cancer when there is none.

UCLA lung cancer radiologist Denise Aberle and colleagues published results of a major study in the New England Journal of Medicine in 2011, showing that the use of CT scans detected a greater number of early lung cancers than X-ray screening, and saved lives as a result.

Using information from a large National Institutes of Health clinical trial, researchers and professional health organizations are working to refine the criteria for determining if a scan shows lung cancer, said Aberle, who also is a former investigator for UC’s Tobacco and Related Diseases Research Program (TRDRP).

“We have several ways to improve the accuracy of CT lung cancer scans and lower false positive rates,” she said. “I think we can now increase the (detection of) the minimum size of lung nodules that we consider to be cancerous.”

Also, as more scans are performed, researchers and clinicians will become better at identifying those at highest risk; and by focusing screening on them, the proportion of true positives will rise — results that accurately detect cancer.

Imaging likely will continue to play an important part in lung cancer diagnosis. But Aberle is optimistic too about the growing effort to identify telltale molecular “biomarkers” that can indicate the presence of cancer simply from a blood or saliva sample.

The research is based on the understanding that cancer cells develop and spread because of gene mutations that give them growth advantages. These mutations and their altered proteins can be measured. The goal is to identify unique “panels” of proteins, metabolites and other molecules that occur in cancer, and to use them for screening.

These are early days for the research, but scientists expect that biomarkers ultimately will allow them to quickly distinguish different types of cancer to determine treatment strategies. When fully developed, the strategy will offer straightforward, non-invasive and cost-effective cancer screening diagnostics.

UC’s TRDRP administers the California Cancer Research Fund, made possible by taxpayers who donate money by checking line 413 on their state income tax forms. This year, TRDRP will utilize that fund to focus research on early detection of lung cancer, especially in high-risk and disproportionately impacted groups.

TRDRP already supports studies by researcher Suzanne Miyamoto and oncologist Karen Kelly at UC Davis to identify different groups of biomarkers in blood, including metabolites and molecules and protein-sugar molecules that are unique to early stage lung cancer. They are among researchers aiming to come up with different sets of markers to strengthen the accuracy and sensitivity of screening and early detection.

“We are using a ‘systems biology’ approach,” Miyamoto said. “We want multiple platforms — a unique set of proteins — but also RNAs and metabolites and other types of molecules that together can generate a profile, or signature, of a specific cancer.”

Miyamoto is a biochemist and molecular biologist and Kelly is a clinician-researcher at the UC Davis Comprehensive Cancer Center. They are part of a larger UC Davis team effort, funded by TRDRP, to perform basic research-to-clinic studies.

David Wong, director of UCLA’s Dental Research Institute, leads studies — also funded by TRDRP — to confirm that panels of specific proteins and RNA molecules identified in a saliva sample can serve as biomarkers of lung cancer.

“TRDRP,” he said, “has been visionary and instrumental in getting beyond the lab and moving toward clinical application. This is an extraordinarily exciting time.”

Certainly, health care advocates would prefer to prevent smoking – and, thus, diseases associated with it – altogether. But many people are still addicted to tobacco, and lung cancer rates are alarmingly high, especially in communities of color. TRDRP, with the help taxpayer donations, is focusing on early screening tests and tools and getting them to the people who need them most.