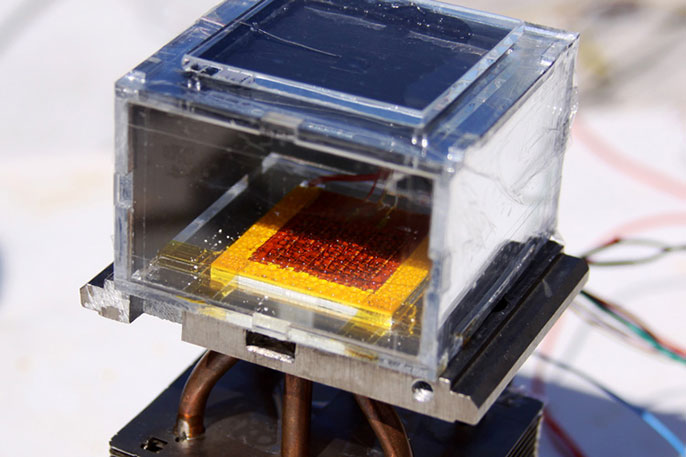 The water harvester, built at MIT, uses MOFs synthesized at Berkeley to suck water from dry air. The harvester uses sunlight to heat the MOF, driving off the water vapor and condensing it for use.

Imagine a future in which every home has an appliance that pulls all the water the household needs out of the air, even in dry or desert climates, using only the power of the sun.

That future may be around the corner, with the demonstration this week of a water harvester that uses only ambient sunlight to pull liters of water out of the air each day in conditions as low as 20 percent humidity, a level common in arid areas.

The solar-powered harvester, reported in the journal Science, was constructed at the Massachusetts Institute of Technology using a special material — a metal-organic framework, or MOF — produced at the University of California, Berkeley.

“This is a major breakthrough in the long-standing challenge of harvesting water from the air at low humidity,” said Omar Yaghi, one of two senior authors of the paper, who holds the James and Neeltje Tretter chair in chemistry at UC Berkeley and is a faculty scientist at Lawrence Berkeley National Laboratory. “There is no other way to do that right now, except by using extra energy. Your electric dehumidifier at home ‘produces’ very expensive water.”

The prototype, under conditions of 20-30 percent humidity, was able to pull 2.8 liters (3 quarts) of water from the air over a 12-hour period, using one kilogram (2.2 pounds) of MOF. Rooftop tests at MIT confirmed that the device works in real-world conditions.

“One vision for the future is to have water off-grid, where you have a device at home running on ambient solar for delivering water that satisfies the needs of a household,” said Yaghi, who is the founding director of the Berkeley Global Science Institute, a co-director of the Kavli Energy NanoSciences Institute and the California Research Alliance by BASF. “To me, that will be made possible because of this experiment. I call it personalized water.”

Yaghi invented metal-organic frameworks more than 20 years ago, combining metals like magnesium or aluminum with organic molecules in a tinker-toy arrangement to create rigid, porous structures ideal for storing gases and liquids. Since then, more than 20,000 different MOFs have been created by researchers worldwide. Some hold chemicals such as hydrogen or methane: the chemical company BASF is testing one of Yaghi’s MOFs in natural gas-fueled trucks, since MOF-filled tanks hold three times the methane that can be pumped under pressure into an empty tank.

Other MOFs are able to capture carbon dioxide from flue gases, catalyze the reaction of adsorbed chemicals or separate petrochemicals in processing plants.

In 2014, Yaghi and his UC Berkeley team synthesized a MOF — a combination of zirconium metal and adipic acid — that binds water vapor, and he suggested to Evelyn Wang, a mechanical engineer at MIT, that they join forces to turn the MOF into a water-collecting system.

The system Wang and her students designed consisted of more than two pounds of dust-sized MOF crystals compressed between a solar absorber and a condenser plate, placed inside a chamber open to the air. As ambient air diffuses through the porous MOF, water molecules preferentially attach to the interior surfaces. X-ray diffraction studies have shown that the water vapor molecules often gather in groups of eight to form cubes.

Sunlight entering through a window heats up the MOF and drives the bound water toward the condenser, which is at the temperature of the outside air. The vapor condenses as liquid water and drips into a collector.

“This work offers a new way to harvest water from air that does not require high relative humidity conditions and is much more energy efficient than other existing technologies,” Wang said.

This proof of concept harvester leaves much room for improvement, Yaghi said. The current MOF can absorb only 20 percent of its weight in water, but other MOF materials could possibly absorb 40 percent or more. The material can also be tweaked to be more effective at higher or lower humidity levels.

“It’s not just that we made a passive device that sits there collecting water; we have now laid both the experimental and theoretical foundations so that we can screen other MOFs, thousands of which could be made, to find even better materials,” he said. “There is a lot of potential for scaling up the amount of water that is being harvested. It is just a matter of further engineering now.”

Yaghi and his team are at work improving their MOFs, while Wang continues to improve the harvesting system to produce more water.

“To have water running all the time, you could design a system that absorbs the humidity during the night and evolves it during the day,” he said. “Or design the solar collector to allow for this at a much faster rate, where more air is pushed in. We wanted to demonstrate that if you are cut off somewhere in the desert, you could survive because of this device. A person needs about a Coke can of water per day. That is something one could collect in less than an hour with this system.”

Co-authors of the paper with Yaghi and Wang are Eugene Kapustin and Hiroyasu Furukawa of UC Berkeley and Hyunho Kim, Sungwoo Yang, Sameer Rao, Shankar Narayanan and Ari Umans of MIT. The work was supported in part by ARPA-E, a program of the U.S. Department of Energy. The work on MOFs in Yaghi’s laboratory is supported by BASF and the King Abdulaziz City for Science and Technology in Riyadh, Saudi Arabia.