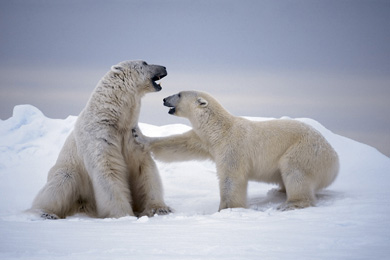 At the end of the last ice age, a population of polar bears was stranded by the receding ice on a few islands in southeastern Alaska. Male brown bears swam across to the islands from the Alaskan mainland and mated with female polar bears, eventually transforming the polar bear population into brown bears.

At the end of the last ice age, a population of polar bears was stranded by the receding ice on a few islands in southeastern Alaska.

Male brown bears swam across to the islands from the Alaskan mainland and mated with female polar bears, eventually transforming the polar bear population into brown bears.

Polar bears are genetically a very homogeneous species, with no evidence of brown bear genes in the population.

Evidence for this surprising scenario emerged from a new genetic study of polar bears and brown bears led by researchers at the University of California, Santa Cruz. The findings, published March 14 in PLOS Genetics, upend prevailing ideas about the evolutionary history of the two species, which are closely related and known to produce fertile hybrids.

Previous studies suggested that past hybridization had resulted in all polar bears having genes that came from brown bears. But the new study indicates that episodes of gene flow between the two species occurred only in isolated populations and did not affect the larger polar bear population, which remains free of brown bear genes.

At the center of the confusion is a population of brown bears that live on Alaska's Admiralty, Baranof and Chicagof Islands, known as the ABC Islands. These bears — clearly brown bears in appearance and behavior — have striking genetic similarities to polar bears.

ABC Islands brown bears are more closely related to female polar bears than to male polar bears. "This population of brown bears stood out as being really weird genetically, and there's been a long controversy about their relationship to polar bears. We can now explain it, and instead of the convoluted history some have proposed, it's a very simple story," said coauthor Beth Shapiro, associate professor of ecology and evolutionary biology at UC Santa Cruz.

To understand how hybridization could lead to this unexpected result, the team ran simulations of various demographic scenarios. "Of all the models we tested, the best supported was the scenario in which male brown bears wandered onto the islands and gradually transformed the population from polar bears into brown bears," said first author James Cahill, a graduate student in ecology and evolutionary biology at UC Santa Cruz.

This scenario is consistent with the known behavior of brown bears and polar bears, according to coauthor Ian Stirling, a biologist at the University of Alberta in Edmonton, Canada. Mixing of polar bears and brown bears is seen today in the Canadian Beaufort Sea, where adult male brown bears wander onto the remaining sea ice in late spring and sometimes mate with female polar bears, he said. In areas such as western Hudson Bay and the Russian coast, polar bears are spending more time on land in response to climate warming and loss of sea ice, a behavior that could have left polar bears stranded on the ABC Islands at the end of the last ice age.

Young male brown bears tend to leave the area where they were born in search of new territory. They may well have dispersed across the water from the Alaskan mainland to the ABC Islands and hybridized with polar bears stranded there when the sea ice disappeared.

"The combination of genetics and the known behavior of brown and polar bears hybridizing in the wild today tells us how the ABC Islands bears came to be: They are the descendants of many male brown bear immigrants and some female polar bears from long ago," Stirling said.

The findings suggest that continued climate warming and loss of arctic sea ice may lead to the same thing happening more broadly, said coauthor Richard E. (Ed) Green, an assistant professor of biomolecular engineering in UC Santa Cruz' Baskin School of Engineering. "As the ice melts in the Arctic, what is going to happen to the polar bears? In the ABC Islands, the polar bears are gone. They're brown bears now, but with polar bear genes still present in their genomes," he said.

"In retrospect, I think we were wrong about the directionality of the gene flow between polar bears and Irish brown bears," she said.

The new study does not address the question of how long ago polar bears diverged from brown bears, but it may help sort out the conflicting results of recent studies. "It's a good step in the right direction of understanding what really happened," Shapiro said.

The study does indicate that the divergence of polar bears from brown bears was only half as long ago as the split between the brown bear and black bear lineages, said Cahill. "We can tell how long brown bears and polar bears have been separate species as a proportion of how long ago they separated from more distantly related species, but putting a year on it is very difficult," he said.

Green noted that efforts to understand the relationship between polar bears and brown bears has been complicated by the unusual case of the ABC Islands brown bears. "It's as if you were studying the relationship between humans and chimpanzees and your analysis included DNA from some weird population of humans that had hybridized with chimps. You would get very strange results until you figured that out," he said.