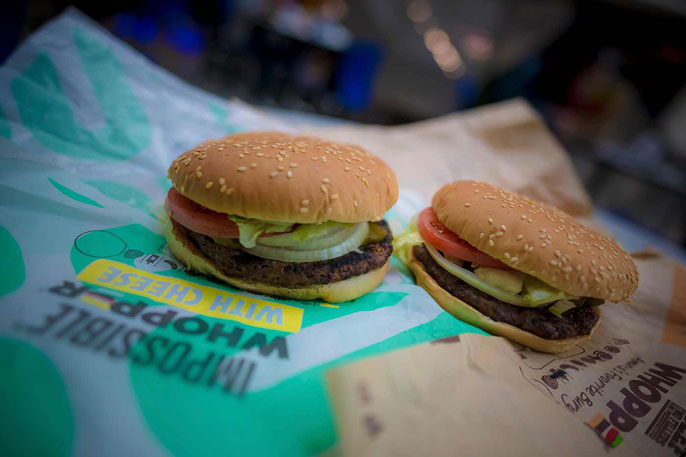 Can you tell the difference? Burger King has been challenging customers to see if they can taste the difference between an Impossible Whopper and a traditional beef Whopper. UC San Diego alumna Liz Specht says in the near future an increasing percentage of our food will come from plants as meat alternatives overtake animal-based products on a number of levels, from nutrition to taste.

Liz Specht, Ph.D.’ 14, biological sciences, is the associate director of science and technology at the Good Food Institute, a nonprofit organization that supports plant-based and cultivated alternatives to conventional meat products.

As a firm believer in the power of technology to enable society to meet growing food demands in a sustainable way, Specht analyzes areas of technological need within plant-based and cultivated meat innovation and forecasts future growth bottlenecks. She has a decade of academic research experience in synthetic biology, recombinant protein expression and development of genetic tools.

Q. Can you explain why the new wave of alternative and plant-based meats, such as the Impossible Burger, is such a phenomenon?

A. The tidal wave of interest in plant-based meat over the last few years has arisen because these products are no longer catering simply to the vegetarian or vegan segments of the population. They appeal to the growing category of “flexitarian” consumers, those who don’t eschew meat altogether but who are seeking to reduce their meat consumption, who now comprise upwards of 50 percent of consumers, according to some studies. In order to appeal to these consumers, the products need to really deliver on that taste and texture of meat — and that’s exactly what these newer products do.

In parallel, consumers are increasingly aware of all of the negative impacts of conventional meat production, and younger generations of consumers are especially motivated to decrease their environmental footprint and to have concern for animals. Millennials and Gen Z consumers are far more likely than their parents to see their food choices as an expression of their values. These two synergistic trends — better-tasting products alongside more aware and altruistic consumers — are really driving the demand for alternative meats.

Q. What are the core issues here?

A. Meat is undeniably among the most resource-intensive foods by virtually any metric: land use, water use, greenhouse gas emissions — you name it. It seems every few months, another huge report is released synthesizing the work of hundreds of environmental scientists around the world and they all come to the same conclusion: we all need to eat far less meat in order to have any chance of hitting our climate targets and preventing massive environmental collapse. The United Nations Food and Agriculture Organization has been saying for over a decade that animal agriculture is one of the greatest contributions to every environmental issue, from local to global. Insatiable demand for meat is driving massive deforestation in places like the Amazon to clear land for pasture grazing and growing feed crops, and the extraordinary amounts of animal waste produced by concentrated animal feeding operations cause pollution of our waterways, oceans, and air.

It’s not just sustainability, though. Meat production also poses a huge threat to public health. These industrial animal agriculture facilities (“factory farms,” which produce over 99 percent of all meat consumed in the U.S.) are breeding grounds for antibiotic resistance and zoonotic disease, which some analyses indicate are greater threats to the human race than climate change.

And finally, I’d be remiss not to mention animal welfare. Consumers are increasingly aware of and concerned about the treatment of animals raised for food, as evidenced by the growing support for laws that outlaw the most cruel practices and ensure more living space for farmed animals. However, a growing number of people feel these reforms don’t go far enough and that there is no truly humane way to farm animals for meat, eggs or dairy products.

Q. What would you say to someone who just loves to eat meat?

A. The goal of the plant-based and cultivated meat industry is to provide consumers with that exact experience that they crave and love, but to do so with plant-based ingredients or with animal cells. The greatest point of pride for the flagship plant-based meat brands is that as they continue to refine their formulation, their products become more and more indistinguishable from meat. In fact, Burger King has been running promotions with their new plant-based Impossible Whopper that challenge consumers to see if they can tell which is which between the Impossible burger and a beef burger! And the entire motivation for pursuing cultivated meat is to literally make real animal meat by farming animal cells, without involving a whole animal, so that the consumer experience is precisely what meat lovers want.

Q. What will be our relationship with meat in the next 20 years?

A. Globally, demand for meat will continue to grow as consumers in emerging economies move into higher socioeconomic status: that trend has been happening for decades and is unlikely to change. But over the next 20 years, an increasing fraction of that meat will be made from plants or farmed from animal cells, rather than from animal agriculture.

A. There are two main categories of alternative meat products: plant-based meat and cultivated meat. Plant-based meat uses plant-derived ingredients (or, in some cases, ingredients derived from fungi) to provide all of the basic building blocks of meat: proteins, fats, vitamins, etc. The result is a product with the same texture and flavor and a comparable or superior nutritional profile but a far lower environmental footprint. In some cases, these products also incorporate ingredients made through fermentation that add substantially to the flavor profile, such as the leghemoglobin protein used in the Impossible burger that provides the same meaty flavor as do related heme proteins (hemoglobin and myoglobin) found in animal meat.

Cultivated meat (which is also called cultured meat, cell-based meat, or clean meat) is made by cultivating animal cells directly, in the same way that we can grow other types of cells like yeast or bacteria for fermented foods or probiotic foods. Animal cell culture has been performed for decades predominantly by the biomedical industry to make therapeutics, but these same principles can be used to grow animal cells into muscle tissue — which is exactly what meat is. Unlike plant-based meat, cultivated meat is not yet available on the market: it’s still being developed by several dozen startup companies, and commercial launch is expected to happen in the next few years.

Q. Describe your current position and a typical day.

A. It’s trite but true that one of my favorite parts of my job is truly that no day is a typical day — every day brings new challenges and opportunities for growth. I lead our Science & Technology Analysis Team, which churns out research in the form of white papers, peer reviewed papers and other publicly accessible resources that help guide researchers and innovators toward the most critical technical challenges facing the alternative protein sector. This requires a lot of deep thought and analytical strategy as well as managing other researchers, somewhat like the role of a research faculty member at a university. But my role also entails a lot of external-facing engagement with various scientific and business audiences and communities. I write opinion editorials for popular science magazines, speak at over three dozen conferences and workshops a year and meet with investors, entrepreneurs and researchers to encourage more R&D and innovation in the plant-based and cultivated meat sector.

A. Biological systems have had billions of years to optimize, make mistakes and iterate through the process of evolution, unlocking astounding creativity. From a relatively limited set of elements and molecules, biological systems can create unlimited combinations of processes and structures. This is the ultimate Lego set, and one that we can use to our advantage to address every conceivable challenge — from health to food to the environment and beyond.

Q. Can you talk about the value of basic research?

A. Basic research forms the bedrock of the insights and discoveries that enable applied research. Without the fundamental breakthroughs and paradigm shift that can arise from basic research, our ability to develop new solutions to real-world problems would be severely handicapped. Although it may feel more urgent or essential to address tangible problems — especially when resources are scarce and we must make hard decisions about what research to fund — it’s critical to continue supporting basic research too. Otherwise, we are tying our hands for future innovation.

Q. Out of curiosity where did you eat at UC San Diego and what were your favorite dishes here?

A. Good question — it has been a while! Like any grad student, I was watching my budget so I tried to bring my meals from home whenever possible. But when my lab work kept me on campus late in the evenings or stymied my cooking for the next day, I was a fan of the yellow curry at Hi Thai, which was located right next to my lab building.

Q. What’s next for meat alternatives?

A. So far, meat alternatives have mostly been focused on replicating the exact flavor and texture of conventional meats that consumers are familiar with. But the species of meat we currently eat (cows, chickens, pigs, etc.) weren’t selected for being the most delicious or nutritious: these species comprise the vast majority of our meat consumption simply because these species happened to be easy to domesticate. In the near future, we’ll begin to see meat alternatives that outperform their animal-based counterparts at multiple levels, from taste to nutrition. We have barely scratched the surface in terms of what’s possible for plant-based and cultivated meat. Once we decouple the means of meat production from the biological limitations of the animal itself, anything becomes possible.