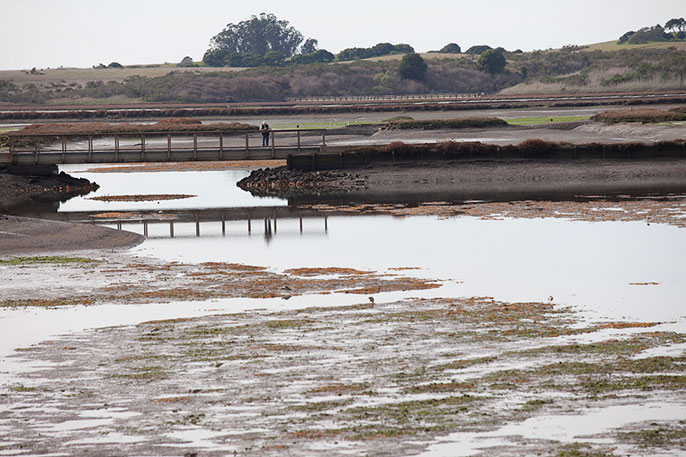 A comprehensive study of a major California estuary has documented the links between nutrient runoff from coastal land use, the health of the estuary as a nursery for young fish, and the abundance of fish in an offshore commercial fishery. The study, published the week of June 8, 2015, in Proceedings of the National Academy of Sciences, focused on Elkhorn Slough and Monterey Bay on California's central coast.

Lead author Brent Hughes, now a postdoctoral research fellow at the University of California, Santa Cruz, began studying water quality in Elkhorn Slough as a UCSC graduate student. His earlier research showed that virtually every portion of the estuary is adversely affected by high nutrient levels, which stimulate the growth of algae, leading to low oxygen levels when the algae die and decompose. The new study, based on data collected over the past 40 years, shows how low levels of dissolved oxygen (a condition known as "hypoxia") affects fish populations in the estuary and beyond.

"We found that declines in dissolved oxygen levels were consistently associated with declines in the diversity and abundance of fish in Elkhorn Slough," Hughes said. "In particular, we saw a drop in certain species of fish that we know use the estuary as a nursery ground for juveniles."

English sole is one of the fish species that uses Elkhorn Slough as a nursery, and the study found that low oxygen was associated not only with fewer juveniles in the estuary, but also with later declines in the numbers of English sole caught in the commercial fishery and scientific fish surveys in Monterey Bay.

"From a conservation perspective, these findings suggest that improvements in land management and reductions in nutrient runoff could directly benefit estuaries and indirectly benefit offshore fisheries due to the important role of estuaries as nurseries for some species," said coauthor Mary Gleason, lead marine scientist for The Nature Conservancy in California.

To conduct the study, the research team assembled long-term data sets from various sources on fish abundance, water quality, and oceanographic and climatic factors over the past 40 years. According to Gleason, the availability of these long-term data sets for Elkhorn Slough and Monterey Bay offered a rare opportunity to study the linkages between coastal land use, water quality in the estuary, and offshore fisheries.

In addition to English sole, many other fish use Elkhorn Slough as a nursery for their young, including other flatfish species such as California halibut, speckled sanddabs, and starry flounder, as well as leopard sharks and bat rays. The slough also supports sea otters, harbor seals, Dungeness crabs, and many species of birds.

"A large assemblage of species uses the slough as a nursery ground, and because it is the only major estuary between San Francisco and Morro Bay, its role as a nursery is important for the whole region," Hughes said. "By looking at the whole assemblage of fish, we found that hypoxia affects the diversity of the system as well as the abundance of individual species."

Over the four decades covered by the study, Elkhorn Slough has received steadily increasing influxes of nutrients, mostly from fertilizer in runoff from agricultural fields in the surrounding watershed and the Salinas Valley. But Hughes said that dissolved oxygen levels have been highly variable over the same time because periods of high rainfall can effectively flush out of the estuary the accumulated organic matter generated by excessive nutrients.

In particular, the researchers found that strong El Niño events, characterized by increased rainfall and warm ocean temperatures along the California coast, were associated with improved dissolved oxygen levels in Elkhorn Slough and other estuaries. In addition to bringing rain, El Niño can also suppress the upwelling of cold, deep ocean water along the coast. This wind-driven upwelling normally brings essential nutrients into nutrient-limited nearshore ecosystems such as Monterey Bay, but the deep water is also low in oxygen and may exacerbate hypoxic conditions when it enters the slough.

"In most estuaries we looked at across the Northeast Pacific, dissolved oxygen conditions responded positively in El Niño years," Hughes said.

While nutrient levels in Elkhorn Slough are primarily affected by agricultural runoff, urban landscapes can also dump excess nutrients into coastal ecosystems. As a result, areas along the southern California coast are also being affected by nutrient enrichment and hypoxia, Hughes said.

"We are finding hypoxic areas wherever we look," he said. "Nitrogen is nitrogen, whether it comes from an agricultural field or sewage or urban runoff. It causes algal blooms, the algae dies and sinks, microbial mats form, and as the microbes consume the algae they deplete the oxygen in the water."

The researchers found that climate can be a powerful moderator of coastal hypoxia, but the effects of climate change are hard to predict. Climate change is likely to bring warmer water temperatures in the future, and warm water holds less oxygen than cold water. It is also likely to influence the frequency and intensity of El Niño events, but exactly how is still unclear. While more research is needed to develop predictive models of how climate change will affect coastal ecosystems, reducing the stress caused by nutrient enrichment and hypoxia will improve the resilience of those ecosystems and help buffer the effects of climate change, Hughes said.

In the area around Elkhorn Slough, The Nature Conservancy is working with partners to reduce nutrient runoff through improved land management practices and treatment wetlands. "Poor water quality is an important threat to some offshore fisheries and marine biodiversity, so it's critical to improve land-based management and reduce runoff," said Gleason. "In addition to managing nutrient applications, another  solution is to restore or build wetlands at the lower end of drainage systems from farms. These treatment wetlands can collect, filter, and treat agriculture discharge water to reduce nutrient levels before the water enters the estuary."