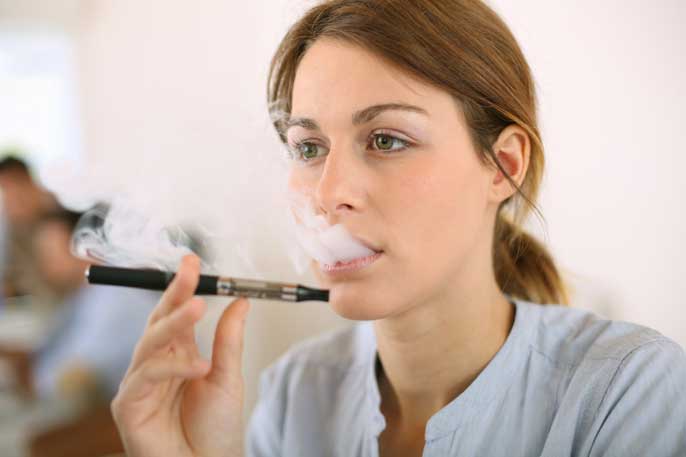 E-cigarettes, promoted as a way to quit regular cigarettes, may actually be a new route to conventional smoking and nicotine addiction for teenagers, according to a new UC San Francisco study.

In the first analysis of the relationship between e-cigarette use and smoking among adolescents in the United States, UCSF researchers found that adolescents who used the devices were more likely to smoke cigarettes and less likely to quit smoking. The study of nearly 40,000 youth around the country also found that e-cigarette use among middle and high school students doubled between 2011 and 2012, from 3.1 percent to 6.5 percent.

“Despite claims that e-cigarettes are helping people quit smoking, we found that e-cigarettes were associated with more, not less, cigarette smoking among adolescents,” said lead author Lauren Dutra, a postdoctoral fellow at the UCSF Center for Tobacco Control Research and Education.

“E-cigarettes are likely to be gateway devices for nicotine addiction among youth, opening up a whole new market for tobacco,” she said.

The study was published online on March 6 in JAMA Pediatrics.

E-cigarettes are battery-powered devices that look like cigarettes and deliver an aerosol of nicotine and other chemicals. Promoted as safer alternatives to cigarettes and smoking cessation aids, the devices are rapidly gaining popularity among adults and youth in the U.S. and around the world. Unregulated by the U.S. Food and Drug Administration, e-cigarettes have been widely promoted by their manufacturers as a way for people to quit smoking conventional cigarettes. They are sold in flavors such as chocolate and strawberry that are banned in conventional cigarettes because of their appeal to youth.

In the new UCSF study, the researchers examined survey data from middle and high school students who completed the National Youth Tobacco Survey in 2011 and 2012.

The authors found that the devices were associated with higher odds of progression from experimenting with cigarettes to becoming established cigarette smokers. Additionally, adolescents who smoked both conventional cigarettes and e-cigarettes smoked more cigarettes per day than non-e-cigarette users.

“It looks to me like the wild west marketing of e-cigarettes is not only encouraging youth to smoke them, but also it is promoting regular cigarette smoking among youth,” said senior author Stanton A. Glantz, PhD, UCSF professor of medicine and director of the Center for Tobacco Control Research and Education.

The new results are consistent with a similar study of 75,000 Korean adolescents published last year by UCSF researchers, which also found that adolescents who used e-cigarettes were less likely to have stopped smoking conventional cigarettes.

In combination, the two studies suggest that “e-cigarettes may contribute to nicotine addiction and are unlikely to discourage conventional cigarette smoking among youths,” said the scientists.

The federal Centers for Disease Control and Prevention reported last year that the majority of adolescents who have ever smoked e-cigarettes also have smoked regular cigarettes. An estimated 1.78 million U.S. students have used the devices as of 2012, the CDC reported.