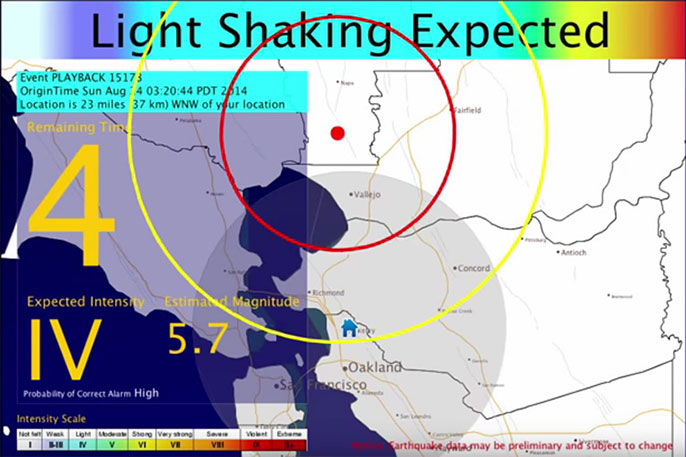 ShakeAlert provided five seconds of warning before the ground began to shake in Berkeley after last year’s 6.0 Napa earthquake.

The West Coast earthquake early warning system moved a step closer to reality this week as the U.S. Geological Survey awarded $4 million to the University of California, Berkeley, and three other universities to turn the current demonstration system, called ShakeAlert, into a robust prototype that can be used broadly by cities, industries, utilities and transportation networks in California, Oregon and Washington.

The awards, which includes $1.2 million to the Berkeley Seismological Laboratory, will allow the partners — USGS, UC Berkeley, the California Institute of Technology, the University of Washington and the University of Oregon – to expand the number of users and bring ShakeAlert closer to full operation while greatly improving its speed and reliability.

These funds come from a $5 million increase to the USGS Earthquake Hazards Program for earthquake early warning approved by Congress earlier this year. The USGS has also spent about $1 million to purchase new sensor equipment for the system.

An early warning system for the general public is still some years away, said UC Berkeley Seismologist Peggy Hellweg, until the seismic networks in each state can be upgraded to provide fuller coverage. Estimates of the eventual cost are about $23 million to improve the seismic networks in California and $12 million annually to operate it.

“Our goal now is to bring more groups on board to use the prototype ShakeAlert, and to work with them and groups already receiving our alerts to help them develop actions: What are they going to do when they receive an alert?” Hellweg said. “Right now, BART is the only group acting on the alerts, to slow trains in preparation for ground shaking.”

Hellweg, who oversees the lab’s sensor network distributed throughout northern California, said that the first priority is to upgrade detectors so that they can immediately share data with the network. Some seismometers are unable to send data for a few seconds after detecting a rumble, which is a critical delay when warning times are measured in the 10s of seconds. Once these seismometers are upgraded, ShakeAlert will be more useful to users such as cities or utilities.

“This funding comes at a crucial time in the project, when the seed-funded portion is coming to an end, allowing us to continue forward uninterrupted,” added Jennifer Strauss, who is coordinating the lab’s collaboration with the USGS and outside partners.