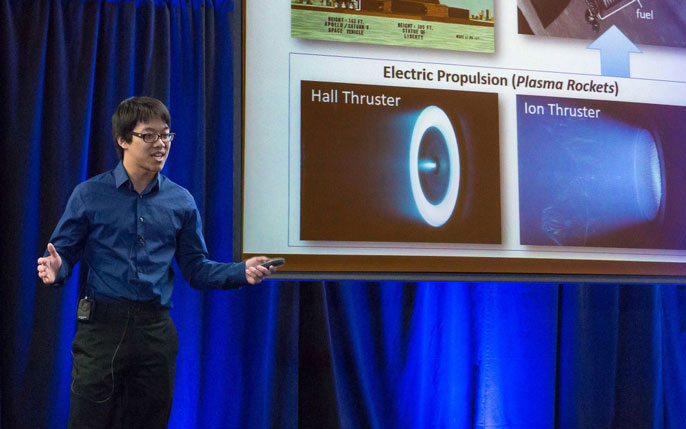 Li, who bested nearly 70 students over three rounds of competition, will represent UCLA at the UC-wide Grad Slam on April 22 in Oakland. He received a $3,000 stipend for first prize.

His presentation, “Traveling to Mars with immortal plasma rockets,” described how traditional chemical rockets currently used for space propulsion could be replaced with much more efficient plasma thrusters.

This technology generates thrust by essentially spitting out positively charged ions from a hot gas, or plasma. However, a downside is that these ions also break off pieces of the thruster’s walls creating the risk of a catastrophic break.

But, Li asked during his presentation, “What if there was an effect where the pieces that break off turn around and go back to the wall, repairing itself?”

Content on earth, but ready to help others reach the 'Red Planet'

This is where Li’s research comes in. He is exploring the best materials for the “plasma redeposition” effect, in which the thruster’s inner wall continues to repair itself even after years of ion bombardment. This would enable spacecraft carrying much less fuel, and therefore less weight, to travel much longer distances.

“Such a thruster would solve the fuel inefficiency of traditional rockets and enable us to travel to Mars,” Li said.

Following Li’s presentation, Robin Garrell, UCLA’s vice provost for Graduation Education and dean of the Graduate Division, asked Li if he’d like to go to Mars. Li replied that he doesn’t like roller coasters, and launching into space would be like that roller coaster experience on steroids. He said he’s quite content here on planet Earth, helping other humans get to the Red Planet.

Li, in his second year of study at UCLA, is a member of mechanical and aerospace engineering associate professor Richard Wirz’s research group. He graduated from UC Berkeley in 2014 with a bachelor’s degree in physics and astrophysics. In 2015, he received a National Defense Science and Engineering Graduate (NDSEG) Fellowship, a highly competitive three-year award, from the U.S. Department of Defense.

Li said that after earning his Ph.D., he wants to work in applied research and development for space exploration.

Other finalists and awards

Second place and a $2,000 stipend was awarded to Philip Bulterys, of the Microbiology, Immunology, and Molecular Genetics Department. Third place and the Audience Choice Award went to Courtney Young of Molecular Biology Department, who received a $1,500 stipend.

Separately, late last year a UCLA team earned a runner-up spot in a NASA-sponsored challenge to build a habitat for Martian explorers out of the planet’s native materials.