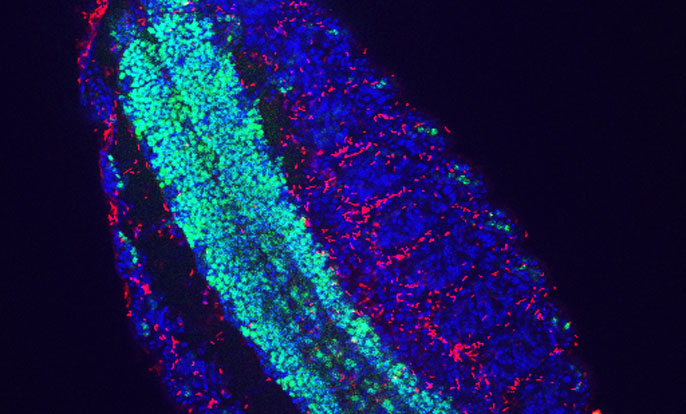 A team of scientists have discovered a key mechanism that drives a bacteria that kills male insects, a development that could potentially be exploited to control insect pest species in the future.

Numerous insects, including beetles, wasps and butterflies, harbor types of bacteria that are transmitted by females and induce the preferential death of males. This sex-specific lethality benefits the bacteria because males are “dead ends,” meaning they don’t transmit the bacteria, and their absence may result in additional resources for their female siblings who can more successfully transmit the bacteria.

Although these symbiotic relationships disrupt a range of developmental processes, the underlying cellular mechanisms are largely unknown.

In a paper published online today (May 5) in the journal Current Biology, the researchers conducted experiments using fruit flies (Drosophila melanogaster) that strongly suggest that the bacterium (Spiroplasma) initiates male killing by directly targeting the dosage compensation complex of an organism, which equalizes gene expression between the males and females.

They found that the dosage compensation complex becomes displaced prior to the killing phase. This effect was accompanied by genome-wide misregulation of gene expression. Further, they artificially induced formation of the dosage compensation complex in infected females, which resulted in the complex being displaced and early death caused by the bacteria. This mirrors the killing effects in males.

“Understanding the molecular mechanisms of how this bacterium can bias sex ratios of insects could have downstream implications in other insects and these mechanisms could potentially be exploited to control insect species in the future,” said Akbari, a member of UC Riverside’s Institute for Integrative Genome Biologyand the Center for Disease Vector Research.

He continued: “For example, knowing the underpinnings of this male killing system may open up possibilities for using Spiroplasma to put a dent into some populations of pest insect, such as Drosophila suzukii, which infests ripening cherries, raspberries, blackberries, blueberries and strawberries.”

The paper is called “Male-killing Spiroplasma Alters Behavior of the Dosage Compensation Complex during Drosophila melanogaster embryogenesis.” In addition to Akbari and Ferree, the authors Becky Cheng, Nitin Kuppanda and John C. Aldrich, all of the W.M. Keck Science Department at Claremont McKenna, Pitzer and Scripps Colleges.