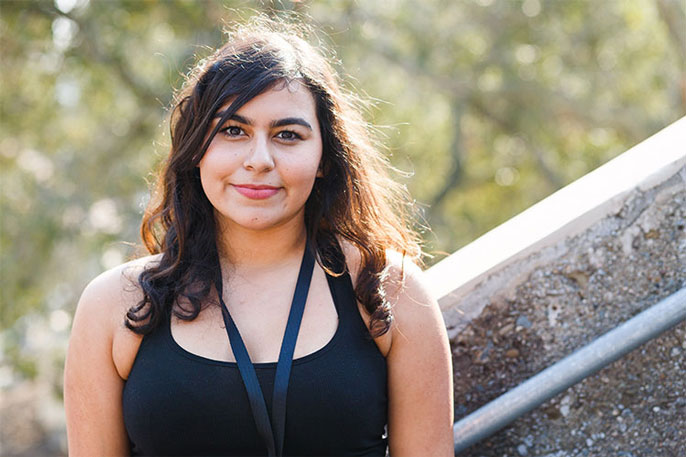 “I am undocumented so it [UC Berkeley] was very welcoming to me and my situation. They really help me financially and it was something very different from other colleges," says Lizbeth Nuñez, UC Berkeley, Class of 2020.

Touring UC Berkeley as a prospective student, Lizbeth Nuñez was impressed by the stately architecture, the state-of-the-art labs and the array of services available to undocumented students like herself.

But what really sold her was the brain.

During a weekend for incoming students, the cognitive sciences unit had set up a table where visitors could look at and compare the gray matter of humans to that of sheep.

“I was totally fan-girling over the brain,” said Nuñez, who spent about an hour talking neuroscience with other students at the table. “I thought, if this is what you can do at Cal Day, imagine what the classes are going to be like.”

Nuñez has since had a chance to find out. Highlights so far have been discussing genetic variation among humans and comparing the structures of human and Neanderthal skulls.

“I’ve been here for a week and I love it,” she said. “The number of people who are welcoming and accept you for who you are is amazing.”

Nuñez is studying molecular and cell biology with an emphasis in neurobiology. Her career plan: become a psychopathologist – a brain scientist who studies the physical and physiological causes of mental illness.

It’s challenging and demanding stuff. And it’s a far cry from what she was doing just a few weeks before classes started: Picking grapes in the hot sun outside Bakersfield, California.

Seeking extra money for school, Nuñez worked in the fields alongside her mother, who has labored as a farmworker in the Central Valley since migrating to the U.S. from Mexico more than 15 years ago.

Nuñez was born in Sinaloa, but when her father left shortly after she was born, her mother took her and her two sisters across the border into California – the youngest, Nuñez, strapped to her back.

Nuñez’s mother left school in the sixth grade, after her family moved to a remote, rural area without local schools. The family was too poor to pay for transportation to a town where she could get an education.

She was determined to give her own kids a better life.

Today, Nuñez and both her siblings are pursuing degrees at the nation’s top schools.

“We saw our mother come home tired from working in the fields every day. We knew we didn’t want that – for her or for us,” Nuñez said. Her room at home is cluttered with ribbons and trophies that attest to her achievements: math team, science fair, cross country, choir, student government.

“I worked hard every day to show her it was worth it, everything she did and how hard she worked for us,” said Nuñez.

A welcoming place for undocumented students

Growing up, Nuñez said, her whole world was the small rural town of Delano, California. She has only the foggiest knowledge of her home country – mostly from the handiwork and crafts her aunt brings when she comes to visit, and pictures she sends of the towns and houses there.

She grew up keenly aware, however, of her undocumented status. In her community of mostly Mexican and Filipino immigrants, there was a marked difference in social status between those who did and didn’t have papers.

“You got reminded daily you were not a citizen,” she said.

The support and welcoming environment for undocumented students at UC Berkeley is part of what drew her to the campus.

“They had so many resources for students like me, to help make it a home away from home,” she said.

Nuñez is able to study and speak openly about her status as a result of Deferred Action for Childhood Arrivals (DACA), a policy which enables long-time U.S. residents who arrived as children to be temporarily exempt from deportation.

Although her status makes her ineligible for federal financial aid, Nuñez receives tuition assistance through the California Dream Act and California Assembly Bill 540 (AB 540), which provides aid to students who came to the U.S. as children and meet certain conditions.

Even with this support, however, insecurity about her status and her family’s well-being is a regular feature of her life as an undocumented student, says Nuñez.

Among the specialized services UC Berkeley offers are a counselor who is specially trained to deal with issues specific to undocumented students. There is also an attorney who helps with legal issues, including helping students file paperwork to renew their DACA status or quality for aid.

“I know that if I feel left out or struggle,” Nuñez said, “I have people I can turn to for help.”

Paying back by helping others

When she isn’t focused on her studies, Nuñez uses her spare time to make sure other kids get the same shot that she did at pursuing a quality college education.

“When I was in high school, my biggest mentor was my sister. She knew everything about applying to college, where most people in my community had no idea,” she said. “College is so important, and if you don’t know what you’re doing, it’s a real disadvantage.”

Nuñez also credits another important figure: her high school English teacher Michael Simental, who pushed her to think about college and her future from the time she was a freshman. “He would tell me to bring him a list of colleges and majors,” she said. “I would sit for hours talking to him about what I wanted to become.”

As someone who lost family members to brain tumors and has a genetic predisposition to the disease herself, Nuñez was drawn to neurobiology. But she was also drawn to addressing mental health as an issue which affects a large portion of the population.

She wants to advance research solutions that can ultimately help millions of people.

She also has a more immediate, personal goal: to provide for her mother so that she no longer has to work as a farm laborer.

Her mom is only 43 years old, but she has chronic injuries from toiling in the fields and pushing heavy produce-laden carts.

“It is hard to come home seeing her in pain and not having the ability to do anything for her,” Nuñez said.

“She has this endurance that keeps her working even if she can't take the pain because she has always wanted the best for her daughters."