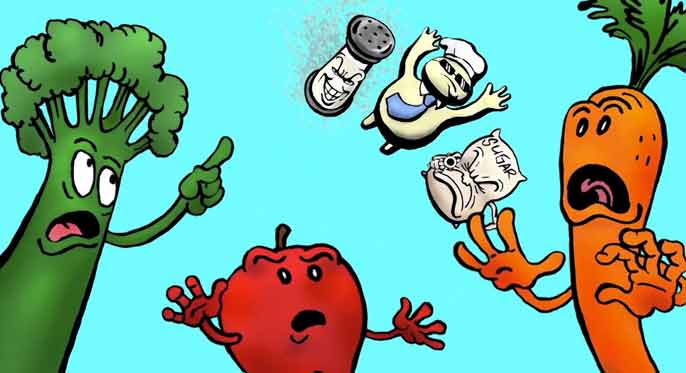 The new videos will be broadcast hourly on more than 2,000 LA Metro buses throughout Los Angeles County, reaching an estimated one million Metro riders daily through March 31.

The videos for Long Live LA include Leaños’s "Evil White Foods," an animated allegory about industrial food production and its connection to the decline of healthy eating habits.

It depicts the nefarious adventures of three villains: "Psycho Sugar," "Sinister Salty," and the "Illsbury Doughboy." Together they go on a rampage, attacking organic vegetable stands and transforming fresh foods into junk food in an evil scheme to turn healthy food into empty calories.

“Our country’s public health crisis has received a lot of attention in the traditional media, yet the problem continues to get worse,” noted Anne Bray, executive director of Freewaves. “We thought that artists could bring a fresh perspective to these issues and reach people in a way that conventional PSAs and news stories do not.”

“Leaños focuses his energy on the over-processed, over-bleached evil ‘white foods’ we all have become accustomed to in our contemporary city lives — white flour, white rice, white salt, etc.,” Bray added. "They look like very beautiful, funny animations, but it is really a very serious story to tell. He's also dealing with the parallels of racism and the food processing industry in this country."

Freewaves commissioned Long Live LA as part of “Out the Window,” the organization’s ongoing initiative to bring video and media art to the public through Metro’s Transit TV, which was funded by a grant from the Robert Rauchenberg Foundation.

Following their run on Transit TV, the videos will be on view in waiting rooms and websites of community health clinics and health organizations throughout Los Angeles.