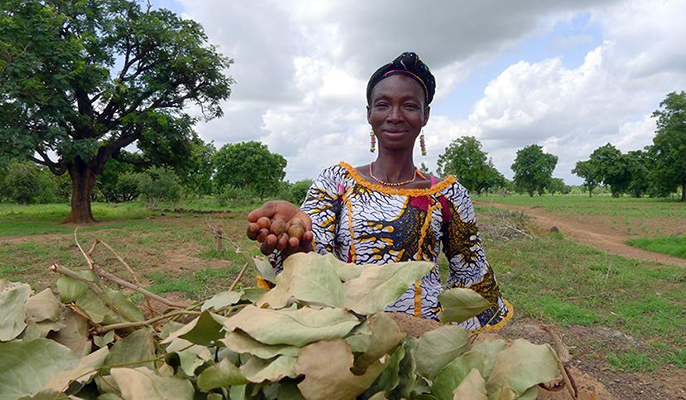 This Southern Burkina Faso farmer holds a handful of shea nuts, an orphan crop in Africa.

UC Davis is partnering in a global plant-breeding consortium that is fighting malnutrition and poverty in Africa by improving the traditional crops of the continent.

The African Orphan Crops Consortium ­­— conceived by Howard Shapiro, a senior fellow at UC Davis and the chief agricultural officer at Mars Inc. — is making great strides in its ambitious attempt to map and make public the genomes of 101 indigenous African foods.

These “orphan” crops are crucial to African livelihood and nutrition, but have been mostly ignored by science and seed companies because they are not traded internationally like commodities such as rice, corn and wheat.

The genomic data on African orphan crops will help plant breeders more quickly select for traits that improve the nutritional content, productivity and resilience of Africa’s most important food crops.

The ultimate goal of the consortium is to eradicate stunting — a medical affliction resulting from chronic malnutrition that affects about 195 million children around the world. In some African countries, about 40 percent of the children under age 5 are stunted and never reach their full potential — physically, mentally or economically.

Launched in 2012, the African Orphan Crops Consortium brings together Mars, UC Davis, and a wide range of researchers, industry groups and policymakers. Together, collaborators have contributed about $40 million of in-kind support.

To improve a crop, breeders traditionally cross plants with desired traits and select the best offspring over multiple generations. Some traits, such as flavor and size, are often determined by many genes acting together, while other traits, like disease resistance, may be regulated by a single gene. Once a plant genome has been sequenced, breeders can home in on genes that affect specific traits and select for those genes at the seedling or seed stage. This accelerates the crop improvement process.

“I believe this project will succeed where others have failed because it focuses on crops that have evolved to grow here,” said Busiso Mavankeni, a plant breeder with Zimbabwe’s Department of Research & Specialist Services. “By improving these neglected crops, we help the children who eat them and the farmers who depend on them to support their families.”

Mavankeni, who graduated from the Plant Breeding Academy in 2014, is working to improve Bambara groundnut, a backyard legume grown by nearly 70 percent of small-scale farmers in Zimbabwe and across Africa.

“Bambara is a complete food, up to 25 percent protein, more than 60 percent carbohydrate and about 6 percent fat,” Mavankeni said. She hopes to reduce the maturation time for the crop, and make it more disease resistant and drought tolerant.

Initially, the African Orphan Crops Consortium had planned to sequence the genome of about 16 indigenous crops, but that number grew when the group surveyed Africa’s agricultural leaders.

“We were told in order to have any impact on nutrition we would need to improve at least 100 crops,” Shapiro said. “In the end, we went with 101 crops, including the baobab tree, which can survive even the worst drought. You can eat its leaves, which are actually quite tasty.”

Other crops include the legume, pigeon pea, as well as a form of grain called finger millet, and spider plant, a leafy green vegetable that’s already about twice as nutritious as spinach.

The group collaborates with researchers all over the world, and all of its sequence information will be posted to the Web and offered free to anyone, on condition it not be patented.

“Because we share all our information, we can build on each other’s research,” said Allen Van Deynze, professional researcher with the UC Davis Department of Plant Sciences and a founding member of the consortium. “We hope to have five genomes out for public review within the next six months.”

Training plant breeders for the world

The UC Davis Plant Breeding Academy plans to train 250 breeders over the next five years in Africa, and those graduates are becoming partners in the orphan-crop effort.

Daniel Adewale, plant breeder with the Ondo State University of Science and Technology in Okitpupa, Nigeria, is using the skills he learned in the 2014 academy to improve the African yam bean, increasing its essential amino acid content and reducing its cooking time.

Improved plant breeding, fertilizers and irrigation helped Asian countries turn food deficits into surpluses during the Green Revolution in the 1960s by producing vast amounts of corn, wheat and rice. For various reasons, that movement didn’t extend to Africa, but professor Iago Hale from the University of New Hampshire, who also teaches at the UC Davis Plant Breeding Academy in Africa, predicts the orphan crops plant-breeding revolution will be more fruitful.

“It has a much better chance of success, because it focuses on species that are already adapted to the continent’s climates, environments and cultures,” said Hale, who received his Ph.D. in horticulture and agronomy from UC Davis in 2011. “The project focuses on the food people eat, not the food we think they should eat, from a global commodity perspective. I believe we will look back in a generation and understand this was the beginning of a new era in human well-being.”

More information on the consortium and a complete list of partners.