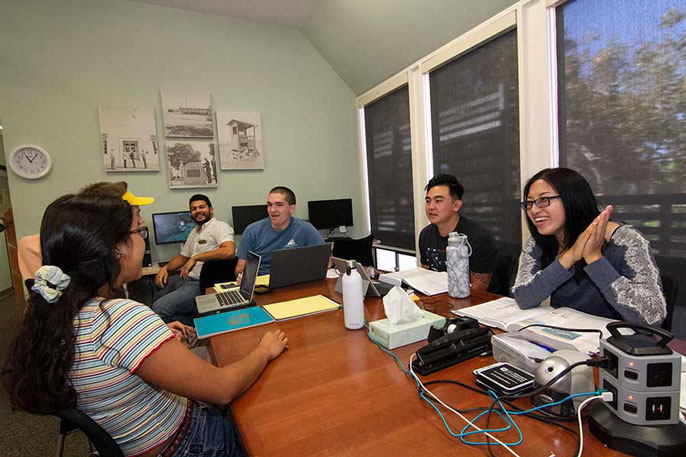 The tragic events of Sept. 11, 2001 roused powerful emotions across the nation. For Emerald Liu, UC San Diego’s Student Veteran of the Year, it was the catalyst in her decision to join the military.

Only a freshman in high school at the time, Liu watched on television as the twin towers collapsed amid thick, gray smoke and decided then that she would give back and serve her country. After earning her GED, she enlisted in the U.S. Navy, eager to travel the world and venture outside of the “very tight Chinese bubble” she was living in San Francisco.

Instead of sailing the seas as she had imagined, Liu’s career took flight as an Aviation Technician (AT) for the F/A-18 Hornet combat jet. She earned her plane captain certification in record time, managing daily pre-flight and post-flight checks, essentially responsible for the pilot’s life. Yet Liu’s success was stalled by an unfortunate accident. She was blown off the back of a jet when the engine was turned on unexpectedly. She fractured part of her skull, leading to migraines and fainting spells that ended her service after just three years.

Liu embraced the changing tide by enrolling in community college before transferring to UC San Diego. After earning a bachelor’s degree in physiology and neuroscience in 2018, she has continued her studies as a graduate student in biology with the goal of entering a joint M.D.-Ph.D. program. Liu is also mother to a 2-year-old daughter on the autism spectrum, which drives her desire to study pediatric psychiatry to better address the needs of children at their developmental level.

She has since become an integral part of the campus’ Student Veterans Resource Center, where she serves as one of five Peer Navigators — current students who support incoming military-connected students—warmly welcoming all who arrive. Her goal is to “be a friend with knowledge, and do more listening than talking.” She offers referrals to resources and insights based on her own experiences, in addition to planning social activities that build community. Liu was chosen as UC San Diego’s Student Veteran of the Year, and will be honored along with staff member Ynez Hicks at the Nov. 7 Veterans Recognition Ceremony for their service, hosted by the UC San Diego Veteran Staff Association.

Transitioning from military to academic life

The Student Veterans Resource Center (SVRC) draws a diverse community of military-connected students, including current and former U.S. military service members, military spouses and dependents as well as members of the Reserve Officers’ Training Corps (ROTC). The space is dedicated to ensuring that students successfully transition from the military environment to campus life, and are assisted in their progress toward completing their academic degree.

Junior Alyson Fruchey was invited to visit the SVRC by two Marines who noticed her in uniform during her first year. “Our little group continues to grow and has helped a lot of people understand that there is meaning and purpose outside of your time in the military,” said Fruchey, who is studying aerospace engineering while also serving as a 2nd-class midshipman in the Naval Reserves Officer Training Corps. “The community helps acknowledge that veterans have accomplished such an outstanding milestone by not only serving their country, but also attending one of the most prestigious universities in the country.”

Now president of the Student Veterans Organization, Fruchey is highly involved with the SVRC. She helps lead community-building events, volunteer service opportunities, as well as fundraisers for veteran-affiliated organizations. She hopes to provide connections in response to feedback she has received that many student veterans have difficulty finding commonalities with peers due to potential age gaps and differing experiences.

For many of UC San Diego’s military-connected students, their diverse experiences help prepare them to succeed in college. According to Liu, service taught her how to engage with intention. “Being in the military teaches you to respect knowledge and experience,” she said. “You learn to pay attention to detail, develop soft skills like forming a study group and grow thick skin so you aren’t afraid to ask questions.”

But what she values most is the camaraderie, something that the Student Veterans Resource Center cultivates. “The most valuable resources are the people, the students and staff at the center,” said Liu. “It is important to have someone who cares about you and is there to listen and support.”