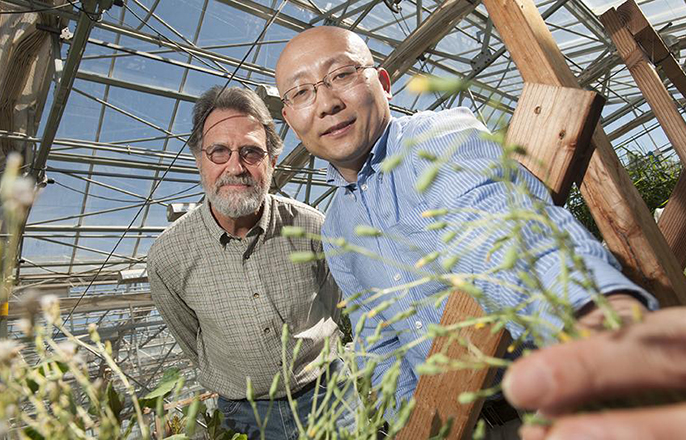 Kent Bradford (left) and Alfred Huo, seen here with a flowering lettuce plant, found that lettuce could be prevented from flowering by increasing the expression of a specific microRNA in the plants. The high levels of this microRNA prevent the plant from transitioning to adulthood and flowering, and the plant continues to make numerous baby leaves rather than forming a compact head of lettuce.

Like most annuals, lettuce plants live out their lives in quiet, three-act dramas that follow the seasons. Seed dormancy gives way to germination; the young plant emerges and grows; and finally in the climax of flowering, a new generation of seeds is produced. It’s remarkably predictable, but the genetics that coordinates these changes with environmental cues has not been well understood.

In a recent study of lettuce and the model plant Arabidopsis, researchers at the UC Davis Seed Biotechnology Center and in China show for the first time that a gene known to direct the depth of seed dormancy and the timing of germination also influences flowering. The study further suggests that the gene does this by influencing production of certain microRNAs — tiny snippets of genetic material that govern transition from one phase of the plant’s life cycle to another.

The findings, which have important implications for the $1.9 billion annual U.S. lettuce crop, will be reported during the week of March 28 in the Proceedings of the National Academy of Sciences.

“It appears that the ‘Delay of Germination 1,’ or DOG1, gene is an environmental sensor, detecting environmental changes and enabling the plant to not only keep the seed dormant but to also delay flowering,” said study co-author Kent Bradford, a plant scientist and director of the Seed Biotechnology Center.

“This gene could be a particularly valuable tool as climate change shifts our growing seasons and we are forced to develop plants that can adapt to those environmental changes,” Bradford said.

Annual flowering plants match their life cycles­ — especially seed germination and flowering — to the appropriate season. If a flowering plant germinates too early, the seedling might appear before temperatures are warm enough for the plant to survive.

Such coordination of life cycles and environmental conditions is equally important for cultivated crops. An entire lettuce crop can be lost if the plants respond to early warm temperatures and “bolt,” producing flowers and seeds before marketable heads of lettuce have formed.

In the new study, the researchers found that suppressing the DOG1 gene in lettuce or Arabidopsis decreased the levels of one microRNA and increased levels of another. As a result, seeds germinated at higher temperatures, and the plants flowered earlier than normal.

“This provides evidence of a molecular genetic mechanism that is at work, coordinating adaptation of seed dormancy and flowering traits in the plants to accommodate environmental conditions,” said study co-author Heqiang “Alfred” Huo, a postdoctoral researcher in the Bradford lab.

“Our results also suggest that the period between seed dormancy and seed germination is a distinct phase in the plant’s lifecycle and that this phase appears to be influenced by the same microRNA systems that govern the plant’s maturation and flowering stages,” Huo said.

Collaborating with Bradford and Huo was Shouhui Wei of the Chinese Academy of Agricultural Sciences in Beijing.

Funding for the study was provided by the U.S. Department of Agriculture competitive grants program and Rijk Zwaan seed company, headquartered in the Netherlands.