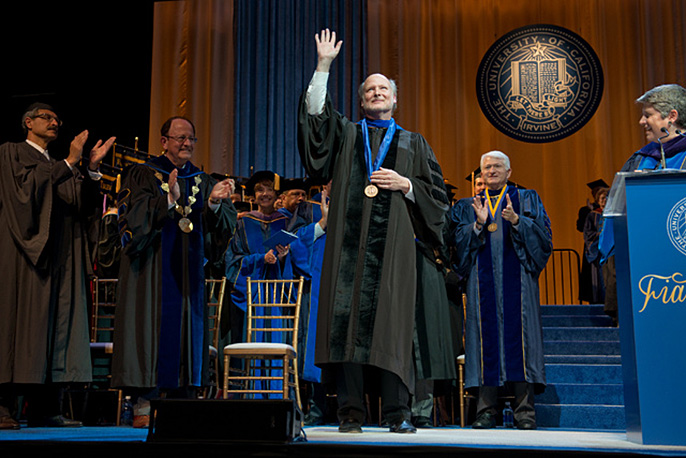 Wearing the Chancellor’s Medal bestowed upon him by University of California President Janet Napolitano (right), Howard Gillman acknowledges the audience during his investment ceremony. Applauding UCI’s sixth chancellor are (from left) Emile Haddad, chair of the UC Irvine Foundation board of trustees; USC President C.L. Max Nikias; and (under the seal) UCLA Chancellor Gene Block.

UC Irvine’s sixth chancellor, Howard Gillman, announced Tuesday (March 31) that he’ll work with deans and faculty to build a large research and educational facility devoted to the “convergence of science and engineering.”

“We will make fundraising for this building a top priority,” he said before more than 700 guests gathered at the Irvine Barclay Theatre for a multimedia event celebrating his investiture.

Officially taking the helm in UCI’s 50th anniversary year, Gillman outlined his vision for the campus’s second half-century. He intends to raise its reputation as a sought-after destination for top-flight faculty and students and extend its reach and impact across the globe. All this will be accomplished, Gillman said, in an environment that requires universities to innovate. The new building is part of that.

“While we have exciting pockets on campus where these sorts of collaborations take place, we do not have the kind of facility that will allow big-scale research on a broad range of global challenges,” Gillman said. “To my mind, the absence of such a facility on this campus is the single biggest impediment to transformational innovation in our core missions of research, education and service. If we’re going to contribute to such vital fields … it’s imperative that we be prepared to invest in such a structure.”

The investiture ceremony, which formally acknowledges a new chancellor, began with artistic innovation: an overture in which a multidisciplinary student troupe traversed the campus in a dance choreographed by Lisa Naugle, dance professor and department chair. Original improvisational music was provided by UCI flutists collaborating with dance professor Alan Terricciano.

As separate groups of performers progressed from Aldrich Park, campus bridges and sculpture gardens toward the Barclay, other students took Instagram photos and John Crawford, associate professor of dance and media arts, curated the incoming images into a live video mosaic that was screened onstage. The project was produced as part of Illuminations: the Chancellor’s Arts & Culture Initiative.

Cary Elwes, perhaps best known for his dual role as farm boy Westley and the Dread Pirate Roberts in the 1987 film “The Princess Bride,” emceed the event. A longtime friend of the chancellor, he urged UCI students to emulate Gillman by “thinking big.”

C.L. Max Nikias, president of the University of Southern California, where Gillman was dean of the Dana & David Dornsife College of Letters, Arts & Sciences before coming to UCI as provost and executive vice chancellor in 2013, gave the keynote address.

“This investiture links the university to other institutions of higher education across the nation, around the world and throughout time, Nikias said.