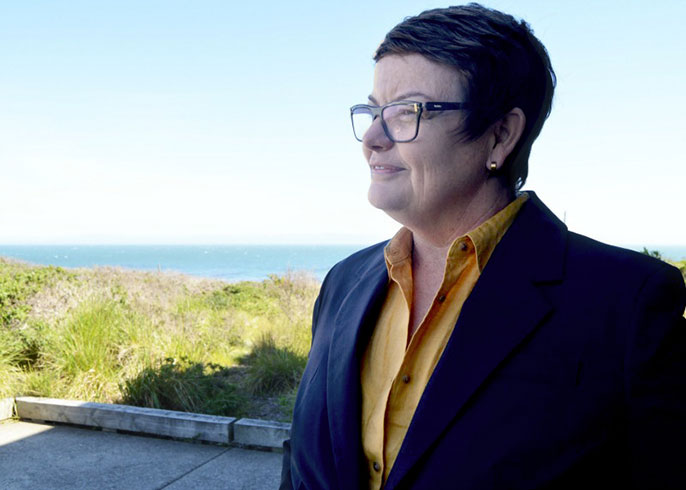 Perry at the Social Sciences Distinguished Alumni Award ceremony in 2017.

Perry (Merrill College '86, bachelor's in sociology and psychology) has been named deputy secretary for early childhood development of the California Health and Human Services Agency and senior advisor to the governor on implementation of early childhood development initiatives. Newsom, who announced the appointment Jan. 21, has made helping the state's youngest residents one of his top policy priorities. He has proposed more than $1.7 billion for expanded early childhood education and interventions.

Perry, 54, began her career as a child-abuse investigator and spent nearly 25 years as a social worker and director of social service programs. In 2005, she was named executive director of First 5 California. Seven years later, she moved to Washington, D.C., as executive director of the First Five Years Fund, a national bipartisan advocacy group that supports the education and care needs of low-income children from birth through age 5. Most recently, she served as president of Save the Children Action Network (SCAN).

In 2009, Perry stepped into the national spotlight as the lead plaintiff in the historic legal challenge that overturned California's ban on gay marriage. That case went all the way to the U.S. Supreme Court, which legalized same-sex marriage in 2013.

In 2017, Perry received the Social Sciences Distinguished Alumni Award and was honored at a public reception in her honor. "I woke up politically at Santa Cruz," she said of her undergraduate years on campus. During a 2017 interview, she said she was heartened to see the country moving toward a more values-based approach — and to see people inspired to work in government "to change the system from within."

"It's hard to see government maligned, when in fact government service is noble and profound," she said.

Perry and her wife Sandy Stier are coauthors of the memoir “Love on Trial: Our Supreme Court Fight for the Right to Marry.” Their son, Elliott, graduated from UC Santa Cruz in 2017.