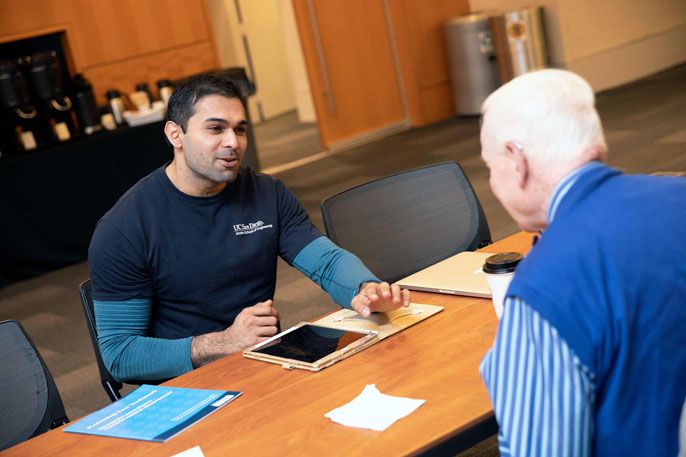 Gopesh Tilvawala, a mechanical and aerospace engineering graduate student at UC San Diego, explains his concept for a steerable microcatheter to judges at the Collegiate Inventors Competition.

Gopesh Tilvawala’s path to San Diego spans four countries and four continents. That journey led him to UC San Diego and the pursuit of a Ph.D. in mechanical and aerospace engineering with a focus on medical device technology. For the past four years, he’s been working to develop a first-of-its-kind catheter that can be remotely controlled to navigate the tiny arteries in the brain.

In November, Tilvawala’s efforts were recognized with the People’s Choice Award and second place overall at the 2018 Collegiate Inventors Competition, organized by the National Inventors Hall of Fame. His device — called Neurotendo — has main applications in diagnosing and treating cerebral aneurysms, which are bulging spots in an artery near the brain. One in 50 people in the United States have an unruptured cerebral aneurysm; when they rupture, they’re fatal 40 percent of the time. Tilvawala’s goal with Neurotendo is to be able to diagnose and treat these aneurysms earlier, safer and at less cost.

“I was happy to be a finalist but felt the weight of the occasion more when I arrived at the U.S. Patent and Trademark Office in D.C.,” Tilvawala said. “Almost every judge on the panel had an amazing invention to their name that has translated and is in use in the market today, so I was absolutely thrilled to get their feedback and win a medal at a national level competition. Earning the People’s Choice Award was great too, and provides some validation from society for the work we’re doing.”

Tilvawala’s path to UC San Diego is full of twists and turns. Born in India, raised in Kenya and a college student in Australia, he followed his Ph.D. advisor, Professor James Friend, when he transitioned from RMIT in Melbourne, Australia, to UC San Diego. Tilvawala, who speaks five languages, said one of the things he most appreciates about research is its universality.

“While culturally there can be differences in how people work or operate, through of all my experiences — Kenya, Australia, India, and the U.S. — one of the beautiful things about research is ultimately when you narrow down to doing work, your background or accent or race or religion, everything goes out of play. There’s purely a focus on the end goal, which is trying to solve the problem.”

Tilvawala said he appreciates the university’s focus on translating research from the lab into real world applications, and noted the confluence of people and infrastructure that make it uniquely capable of doing so.

“We’re based in the Center for Medical Device Technology, but there’s the Galvanizing Engineering in Medicine program, the Center for the Future of Surgery, the Institute for Engineering in Medicine — there are a lot of groups here at UC San Diego, and we have the facilities in place. Once you have the facilities and the right people, it all starts working together and there’s a fusion. Translating basic research into needed applications becomes a reality.”

Tilvawala said the fusion between departments and disciplines has been key in getting his device to this stage — he’s collaborated with researchers from neurosurgery, radiology and vascular surgery, all of whom made key contributions to ensure the device was not only functional, but solving the right problem.

Tilvawala received support and mentorship from Vish Krishnan, Ricardo Dos Santos and Kimberly King, from the Institute for the Global Entrepreneur — a collaboration between the Jacobs School of Engineering and Rady School of Management, with a mission to educate, train and empower engineers to become changemakers and technical leaders. He was also mentored and supported by Alexander Norbash and Alexander Khalessi from the UC San Diego School of Medicine.

Tilvawala named the device Neurotendo because it’s resembles a Nintendo game for neurosurgeons.

While he’s still developing a fully functional prototype of Neurotendo under the guidance of his advisor, Tilvawala said having a real-world application of his research has been key since day one.

“My main aim with Ph.D. research work was using this fundamental science to try and develop something that would translate into real world applications,” he said. “At least in terms of the vision, I had to be able to picture that my research would make a difference to someone out there someday.”

Neurotendo is poised to do just that. There are no brain catheters on the market that can be remotely controlled like Neurotendo; the current state-of-the-art involves surgeons using one hand on a guidewire and the other on the catheter to insert and guide the tube. Tilvawala’s research makes it possible to remotely navigate the small and twisty arteries near the brain, reducing surgery times and creating a safer and more effective procedure.

He used his knowledge of hydraulics, coupled with micro-electronic mechanical systems (MEMS) and soft robotics, to make a medical device with much wider applications than cerebral endovascular surgery alone. Neurotendo could also be used to navigate a catheter through the urinary tract, heart or any other tight, twisty spot that doctors need images of or to operate on.

By extension, it paves the way for the next generation of small, dexterous surgical tools with unprecedented maneuverability.

With the Collegiate Inventors Competition win under his belt, Tilvawala said he’s more motivated than ever to continue creating solutions to today’s pressing challenges.

“There’s so many things we can do that the sooner you finish solving one problem, there are a hundred more out there waiting. There is no dearth of problems, and ideas are no one’s monopoly” he said. “That’s one of the things that keeps me wanting to wake up early and spend long hours in the lab, is figuring out how to solve problems and make a contribution to society.”