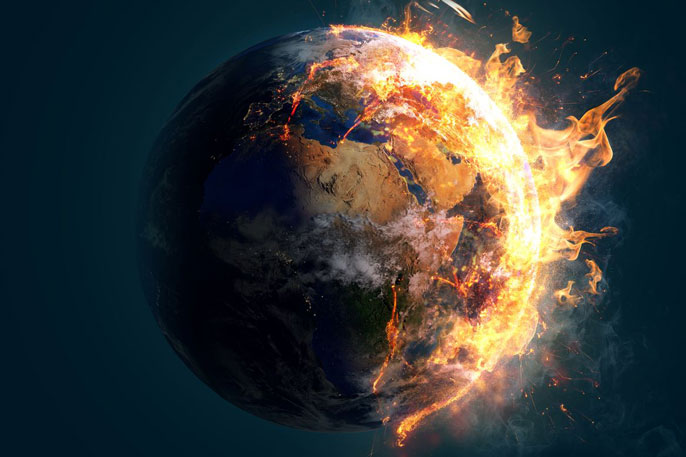 The global population could reach 10 billion by 2050; explosive population growth is contributing to a broad array of other challenges for the planet.

Without immediate and drastic intervention, humans face a “ghastly future” — including declining health, climate devastation, tens of millions of environmental migrants and more pandemics — in the next several decades, according to an international team of 17 prominent scientists.

In a paper published Jan. 13 in the journal Frontiers in Conservation Science, the researchers cite more than 150 scientific studies and conclude, “That we are already on the path of a sixth major extinction is now scientifically undeniable.”

Among the paper’s co-authors is Daniel Blumstein, a UCLA professor of ecology and evolutionary biology and member of the UCLA Institute of the Environment and Sustainability.

Because too many people have underestimated the severity of the crisis and have ignored experts’ warnings, scientists must continue speaking out, said Blumstein, author of the 2020 book “The Nature of Fear: Survival Lessons from the Wild” — but they also must avoid either sugarcoating the overwhelming challenges or inducing feelings of despair.

“Without fully appreciating and broadcasting the scale of the problems and the enormity of the solutions required, society will fail to achieve even modest sustainability goals, and catastrophe will surely follow,” he said. “What we are saying is frightening, but we must be both candid and vocal if humanity is to understand the enormity of the challenges we face in creating a sustainable future.”

The threat of extinction

The Earth has experienced five mass extinctions, each accounting for a loss of more than 70 percent of all species on the planet. The most recent was 66 million years ago. Now, the paper reports, projected temperature increases and other human assaults on the environment mean that approximately 1 million of the planet’s 7 million to 10 million species are threatened with extinction in the coming decades.

One of the major trends discussed in the paper is the explosive growth of the planet’s human population. There are now 7.8 billion people, more than double the Earth’s population just 50 years ago. And by 2050, the figure is likely to reach 10 billion, the scientists write, which would cause or exacerbate numerous serious problems. For example, more than 700 million people are starving and more than 1 billion are malnourished already; both figures are likely to increase as the population grows.

Population growth also greatly increases the risk for pandemics, the authors write, because most new infectious diseases result from human–animal interactions, humans live closer to wild animals than ever before and wildlife trade is continuing to increase significantly. Population growth also contributes to rising unemployment and, when combined with a hotter Earth, leads to more frequent and intense flooding and fires, poorer water and air quality, and worsening human health.

The authors write that there is a “near certainty that these problems will worsen over the coming decades, with negative impacts for centuries to come” and that the adverse global trends are obvious.

“Humanity is running an ecological Ponzi scheme in which society robs nature and future generations to pay for short-term economic enhancement today,” said Paul Ehrlich, a Stanford University professor emeritus of population studies and a co-author of the study.

The paper elucidates issues that have been publicized over the past few years by many activists, including the Swedish 18-year-old Greta Thunberg, Time magazine’s 2019 person of the year. Blumstein said Thunberg has been absolutely right about the urgency of the dangers we face.

The authors also write the severity of the threats should transcend political tribalism, but so far they haven’t — and they’re skeptical about when or if change can occur. “[M]ost of the world’s economies are predicated on the political idea that meaningful counteraction now is too costly to be politically palatable. Combined with financed disinformation campaigns in a bid to protect short-term profits, it is doubtful that any needed shift in economic investments of sufficient scale will be made in time,” the paper reads.

Said Ehrlich: “While it is positive news that President-elect Biden intends to reengage the U.S. in the Paris Climate accord within his first 100 days of office, it is a minuscule gesture given the scale of the challenge.”

The paper suggests concrete changes that could help avert catastrophe. Among them: completely and rapidly ending the use of fossil fuels, strictly regulating markets and property acquisition, reigning in corporate lobbying and empowering women. But it also acknowledges that humans’ innate “optimism bias” has led some to ignore the warnings about our planet’s future.

“By the time we fully comprehend the impact of ecological deterioration, it will be too late,” Blumstein said.

The study’s lead author is Corey Bradshaw, a professor of global ecology at Flinders University in Australia. Other co-authors include John Harte of UC Berkeley; Joan Diamond, Anne Ehrlich and Rodolfo Dirzo of Stanford; and William Ripple of Oregon State University.