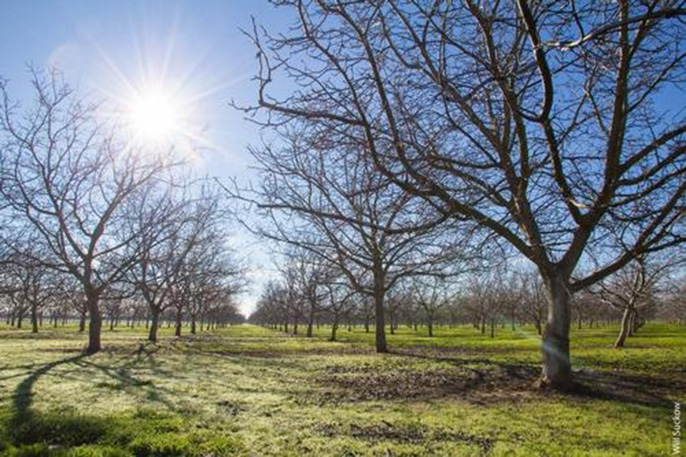 If the current trend of warmer winters continues in Yolo County, chill hours may be insufficient for many walnut varieties by the year 2100.

In an effort to forecast how climate change may affect agriculture, University of California agricultural economists looked at how climate has affected crop acreage in the past. The effect of temperature changes on plants depends on local conditions and the crops grown. In a case study of Yolo County agriculture, warmer winter temperatures would reduce chill hours, potentially reducing yields for some crops while extending the growing season for others, according to a UC study published in the peer-reviewed journal California Agriculture.

“Growers change crops depending on many factors, including climate change and market conditions,” said Hyunok Lee, lead author and research economist in the Department of Agricultural and Resource Economics at UC Davis. “The challenge was to separate the effects of climate on acreage. To isolate the climate effects from the market effect, we used an econometric model.”

This technique used in Yolo County could be used for projecting the effects of climate change on agriculture in other regions, said Lee.

Using about 100 years of climate data and 60 years of farm acreage, Lee and her co-author looked at the relationships between the evolution of local climate conditions and the acreage of 12 major crops grown in Yolo County. The crops included processing tomatoes, rice, alfalfa, wheat, corn, prunes, grapes, walnuts, almonds, safflower, pasture and other fruit.

“When we look at maximum and minimum temperatures, the minimum temperatures are higher while the maximum temperature stays about the same,” Lee said. “And the lower temperature is rising at a faster rate, especially in winter. That's good for winter crops, but not so good for crops that require chill hours.” Many tree crops require cold for a certain number of hours below a critical temperature, commonly 45 degrees Fahrenheit, to stimulate the growth of leaves and flowers.

In Yolo County, warmer winters could result in increased rice, tomato and alfalfa acreage while winter wheat could decline.

Among trees and vines, the most sensitive to climate change are walnuts, which require more chill hours. Walnut acreage would decline, Lee said, while there would be a modest change in grape and almond acreage.

Lee emphasized that market conditions exert a great deal of influence on the crops growers choose to plant. Growers who consider trends in climate change may choose different cultivars rather than different crops, such as a walnut variety that requires fewer chilling hours.

Lee and co-author Daniel Sumner, director of the UC Agricultural Issues Center and Frank H. Buck, Jr. Professor in the Department of Agricultural and Resource Economics at UC Davis, based their acreage projections on following the trend of climate change for the past 105 years, but were not able to incorporate climate variability, extreme weather events, accelerated warming or availability of irrigation water in their modeling.

This research, which was part of a larger study of climate change and agriculture funded by a grant from the California Energy Commission, was also supported by the UC Agricultural Issues Center, a program of UC Agriculture and Natural Resources.