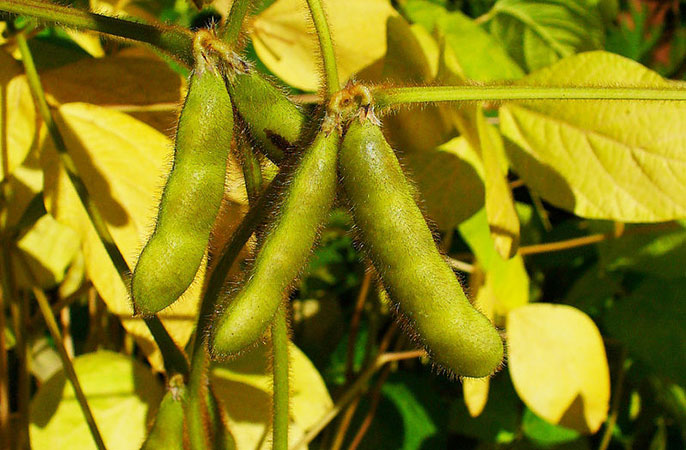 Soybean oil accounts for more than 90 percent of all the seed oil production in the United States. Genetically modified (GM) soybean oil, made from seeds of GM soybean plants, was recently introduced into the food supply on the premise that it is healthier than conventional soybean oil.

But is that premise true?

Just barely, say scientists at UC Riverside and their colleagues at UC Davis. The researchers compared the effects of both oils in experiments performed in the lab on mice. They found that the GM soybean oil is just as unhealthy as regular soybean oil in that it also induces obesity, diabetes and fatty liver. GM soybean oil does, however, have one advantage: it does not cause insulin resistance – the inability to efficiently use the hormone insulin.

“While genetic modification of crops can introduce new beneficial traits into existing crops, the resulting products need to be tested for long-term health effects before making assumptions about their impact on human health,” said senior investigator Frances Sladek, a professor of cell biology and neuroscience at UC Riverside.

Study results will be presented March 6 at the Endocrine Society’s 97th annual meeting, currently taking place in San Diego by Poonamjot Deol, an assistant project scientist in the Department of Cell Biology and Neuroscience who is driving the project in the Sladek lab.

Naturally high in unsaturated fats, vegetable oils were once thought to be healthy, and were hydrogenated to increase their shelf-life and temperature stability. The hydrogenation, however, generated trans fats – now widely recognized as being unhealthy.

Soybean oil, the most common vegetable oil used in the United States, contains about 55 percent linoleic acid, a polyunsaturated fat.

“Our previous results on mice showed that replacing some of the fat in a diet high in saturated fats from coconut oil with soybean oil – to achieve a level common in the American diet – causes significantly more weight gain, adiposity, diabetes and insulin resistance than in mice fed just the high-fat coconut oil diet,” Sladek said.

To determine whether linoleic acid was responsible for the metabolic effects of soybean oil, the researchers designed a parallel diet in which regular soybean oil was replaced, on a per gram basis, with GM soybean oil. The GM soybean oil has a fatty acid composition (low linoleic acid) similar to that of olive oil. The GM plants were developed by DuPont to reduce trans fat production, increase soybean oil shelf life and create a generally healthier cooking oil.

“The GM soybean oil has 0 grams trans fat and more of the monounsaturated fats that are considered heart healthy,” Deol said. “But it had not been tested for long-term metabolic effects until our current study.”

Deol and the rest of the research team found to their surprise that the parallel diet containing GM soybean oil induced weight gain and fatty liver essentially identical to that of a diet with regular soybean oil, with the exception that the mice remained insulin sensitive and had somewhat less adipose (fat) tissue.

“These results indicate that linoleic acid may contribute to insulin resistance and adiposity but that another as yet unidentified component of the soybean oil affects the liver and overall weight gain,” Deol said.

Sladek and Deol were joined in the research by Jane R. Evans, Antonia Rizo and Cynthia Perez at UCR; and Johannes Fahrmann, Dimitry Grapov, Jun Yang and Oliver Fiehn at UC Davis who performed extensive analysis on the liver and blood samples from these mice.

“To our knowledge this is the first in-depth analysis of the metabolic effects of GM soybean oil, and the first metabolomics analysis comparing soybean oil – regular and GM – to coconut oil,” Deol said.