How to read the new nutrition label: 6 things you need to know 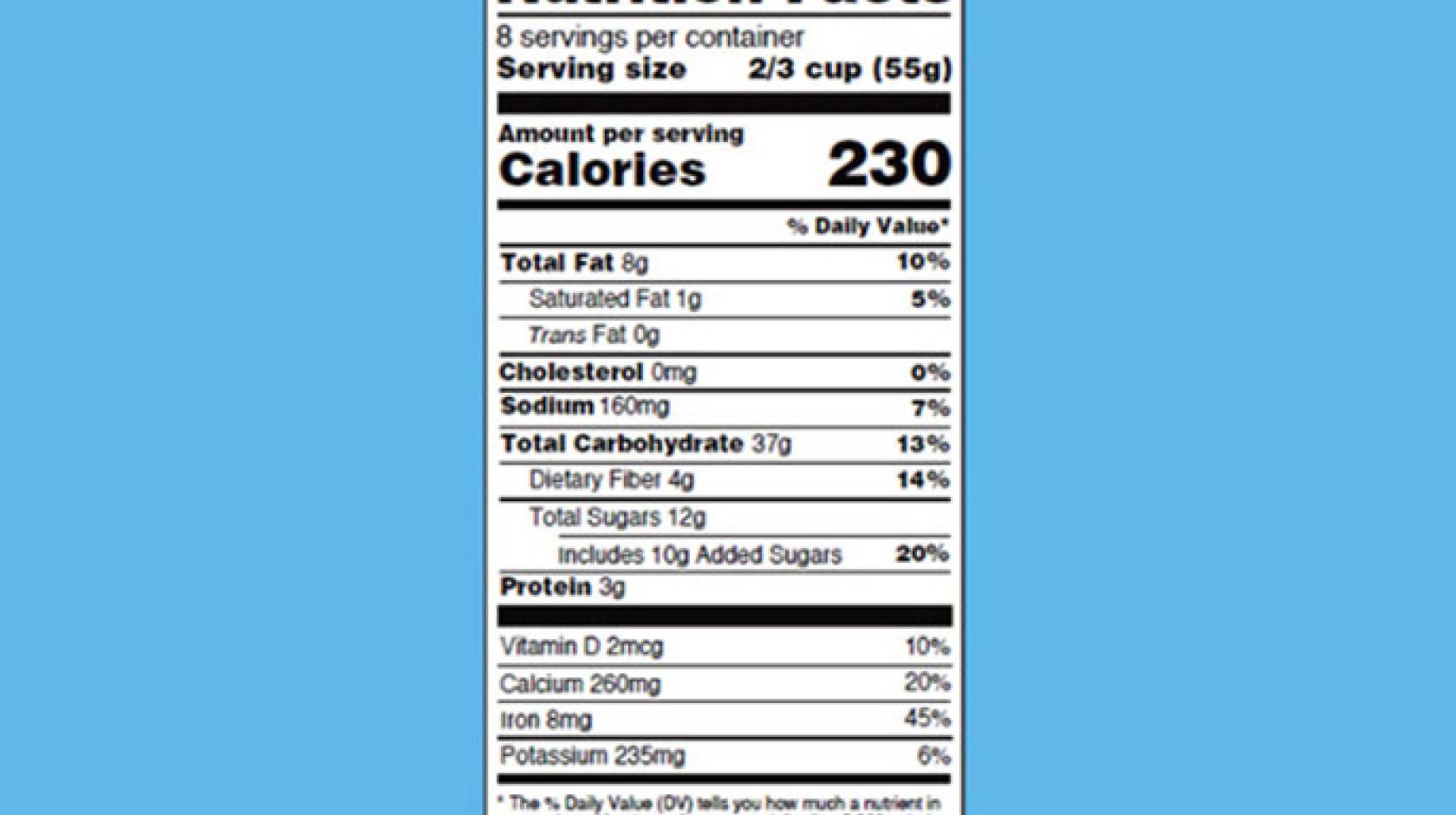 Credit:
The new Nutrition Facts label will list how much added sugar is in a product.

As Americans struggle with obesity and diabetes, help is on the way.

The iconic black-and-white Nutrition Facts label for packaged foods in the U.S. is getting its first makeover in two decades. The federal government’s decision last month to update the food label means that for the first time, beginning in 2018, labels will list how much added sugar is in a product.

The decision, reflecting the latest science, will be felt well beyond the label. University of California food experts praised the labeling changes and offered six key takeaways.

1. Listing added sugar is the most important label change.

The new label will list the amount of added sugar in a product, both in grams and as a percentage of the daily recommended allowance.

Added sugar – any sugar added in the preparation of foods such as table sugar, high fructose corn syrup and others – can be found in hundreds of products such as cereal, yogurt, pasta sauce and salad dressing. But the biggest source is sugar-sweetened beverages, which account for nearly half of Americans’ intake of added sugar.

“One 20-ounce soda will take you over the recommended amount of sugar for an entire day,” said Pat Crawford, senior director of research for the Nutrition Policy Institute of UC’s Division of Agriculture and Natural Resources. “The new label will allow people to reasonably see what they’re doing when they’re consuming high-sugar products.”

The current label lumps added sugar with naturally occurring sugars in the foods themselves, which is a deceptive practice, said Dr. John Swartzberg, a UC Berkeley clinical professor emeritus and editorial board chair of the UC Berkeley Wellness Letter. Listing added sugar “will hopefully guide people away from consuming products with a lot of added sugar,” he said.

More than one out of three adults in the U.S. is obese. Nearly half of U.S. adults have prediabetes or diabetes, raising their risk of heart attacks, kidney failure, blindness and amputations. Among U.S. children, more than 1 in 6 is obese, and diabetes and prediabetes rates are rising. Amid these alarming statistics, there’s a growing concern about too much added sugar in diets.

“It’s important to give the public the information they need in order to modify their diets,” Crawford said. “We are now finding significant effects on diabetes and heart disease rates for those who regularly consume sugary beverages. A large study of women over an eight-year period found that the risk of diabetes among women who consumed one or more servings of sugar-sweetened beverages per day was nearly double the risk among women who consumed less than one serving per month. Further, drinking one 12-ounce soda a day increases the risk of cardiovascular mortality by almost one-third.”

Crawford noted that the new federal dietary guidelines for the first time recommend limiting added sugars in the diet to no more than 10 percent of one’s daily calories.

“The average amount of added sugar in the American diet is more than 20 teaspoons per day, nearly all of which is added to our foods during processing,” Crawford said. “Since about half of this sugar comes in the form of beverages, we have to rethink our beverage choices. Water should be the beverage of choice.”

Consumers will be very surprised to see the percentage of daily value of added sugar in one soda drink, said Michael Roberts, executive director of the UCLA Resnick Program for Food Law and Policy and UC Global Food Initiative subcommittee member. “Time will tell whether this information changes human behavior, i.e., consuming less soda. To be fair, sugar pops up everywhere, not just soda, so the impact that these changes will have on consumers and manufacturers will be interesting to watch.”

When the federal government required that manufacturers add trans fat information on the label a decade ago, the food industry responded by marketing more products with lower trans fats, Crawford said.

“Trans fats are now not allowed to be added to foods during processing, but it all began with labeling,” Crawford said. “We’re going to see some big shifts in the marketplace with products lower in sugars such as cereals, yogurts, spaghetti sauces and beverages, of course. We can look forward to recipe reformulation, which will make products more competitive. It’s a great first step for reducing sugar consumption. In preparation for the new labels, manufacturers are working on creating products with lower levels of added sugars.”

For manufacturers, the trick will be to keep food tasting good to consumers while reducing sugar, Roberts said. “Other large manufacturers will pursue new products that are not heavy on added sugars,” Roberts said. “For example, Coke and Pepsi sell bottled water.”

“There is a push to at least re-size products,” Schmidt added. “There certainly will be an effort for front-of-package labeling that says ‘low sugar.’”

4. The new label could lead to regulations limiting sugar.

“Including added sugar on the label will be a game-changer for those debates about what is a healthy diet for people in the federal food-assistance programs,” said Schmidt, lead investigator on the UCSF-led SugarScience research and education initiative. “Once you’ve got added sugar on the label along with a daily reference value, policymakers will be in the position to set standards for the quantity of added sugar allowed in school lunches and other federal food programs.”

Changes like this have happened before, Schmidt noted. “In the U.K., the government said salt consumption is way too high and mandated that packaged food manufacturers reduce the amount of sodium in their products. It worked like a charm – they just gradually reduced the excess salt in foods to everyone’s benefit.”

The new label also will list more realistic serving sizes and will list calories in a larger and bolder font. “This will help people assess how many calories they are actually consuming,” Swartzberg said. (View a complete list of label changes here.)

Learn more about how much sugar you are really eating in this video with Kimber Stanhope, associate research nutritional biologist at UC Davis.