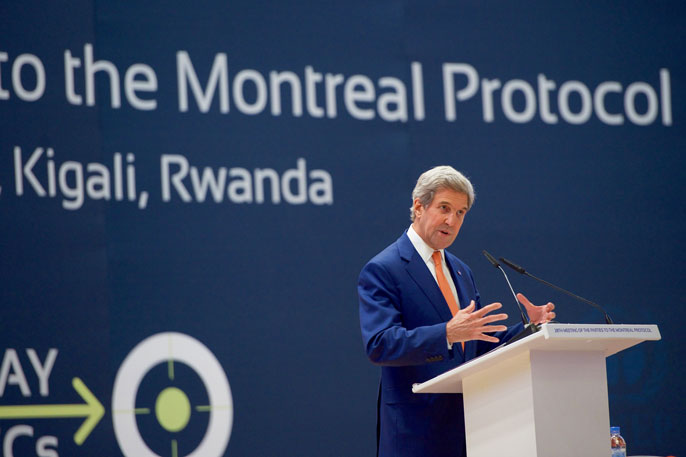 Secretary of State John Kerry delivers remarks during a plenary session of the conference about amending the Montreal ozone layer protection protocol held on October 14, 2016 in Kigali, Rwanda.

More than 170 countries reached a historic agreement this weekend to cut the use of one of the world’s most potent greenhouse gases, marking a major milestone in efforts to keep the planet from catastrophic levels of global warming.

The international accord reached in Kigali, Rwanda, sets legally binding limits on the use of hydrofluorocarbons (HFCs), a type of coolant widely used in air conditioners and refrigerators.

It is one of several climate superpollutants that have been the focus of more than 40 years of research by UC San Diego atmospheric scientist Veerabhadran "Ram" Ramanathan, whose work has shown the powerful impact of HFCs and other gases on global warming.

Ramanathan hailed the agreement Monday and said it was an important step in keeping global temperature increases to a minimum over the coming decades.

“There is a thick blanket of greenhouse gases around the earth, and we need to thin the blanket,” said Ramanathan. “Carbon dioxide will remain in the atmosphere for over a century, but HFCs, which have a global warming effect 1000 to 2000 times that of carbon dioxide are very short-lived, which is why we are focusing on them now.”

The Kigali agreement amends the Montreal Protocol, the global pact signed in 1987 to patch the hole in the ozone layer by halting the use of chlorofluorocarbons (CFCs). The Montreal Protocol is widely held to be one of the most successful global climate agreements and there are high hopes that amended version will follow suit.

The Kigali accord is focused solely on HFCs, a relatively small fraction of the global greenhouse gas emissions by volume, but its impact on global warming is expected to be both significant and fast. And unlike the 2015 Paris climate change accord, the agreement reached in Kigali is legally binding.

Ramanathan and his colleagues played a crucial role in developing the scientific foundation for the global accord.

“The half a degree goal became the rallying cry for the proponents of the HFC amendment to the Montreal Protocol,” said Durwood Zaelke, president of the Institute for Governance and Sustainable Development and co-director of the Program on Governance for Sustainable Development at UC Santa Barbara’s Bren School. “It was repeated by Secretary of State Kerry, U.N. Secretary-General Ban Ki-moon, World Bank President Jim Kim and more than 100 parties in Kigali.”

President Obama echoed the sentiment in his statement on the accord saying, “The world community has agreed to phase down the production and consumption of HFCs and avoid up to 0.5 degrees Celsius of warming by the end of the century — making a significant contribution towards achieving the goals we set in Paris.”

From San Diego to Kigali

In the early 1970s, research by Mario Molina and F. Sherwood Rowland at UC Irvine found that CFCs had a powerful destructive effect on the ozone layer, a discovery which would later win them the Nobel Prize in chemistry. At the same time, Ramanathan was looking at a second atmospheric effect of CFCs at the Scripps Institution of Oceanography at UC San Diego.

“Until 1975, everyone thought carbon dioxide was the only greenhouse gas. That all changed when I showed that CFCs were 10,000 times more potent than CO2,” said Ramanathan.

“In a very real sense, Ramanathan started the effort to reduce global warming by eliminating the fluorinated gases including CFCs when he published his paper in 1975 pointing out that not only were these gases potent ozone destroyers, they also were potent climate pollutants,” said Zaelke.

At the time of the Montreal Protocol signing, the hole in the ozone layer was the more immediate — and more manageable — problem, one that could be solved by finding an alternative to CFCs. The development of HFCs as a replacement coolant grew out of the Montreal Protocol, but while HFCs were an improvement for the ozone layer, global warming was not a factor in the discussion.

“Climate change issues took a long time to be accepted in policy circles,” said Ramanathan, who noted that while the global warming effect of HFCs was established at the time — in fact a 1985 paper by Ramanathan and colleagues showed clearly that HFCs and halocarbons as a group were problematic in this regard — the focus was solely on the ozone hole problem.

With the new language in the Montreal Protocol, the air conditioning and refrigeration industries will once again need to come up with replacements. There are several alternatives available now that have neither ozone nor climate impacts, but the industry has yet to come to a consensus on the best option.

Ramanathan’s work on HFCs and other short-lived climate pollutants such as methane and black carbon have had other wide-ranging effects, including the May 2016 G7 agreement, in which the seven largest industrial nations agreed to reduce this class of pollutants. Ramanathan’s work as a member of the Pontifical Academy of Sciences helped inform Pope Francis’ stance on climate change, laid down in the 2015 encyclical “Laudato si’.”