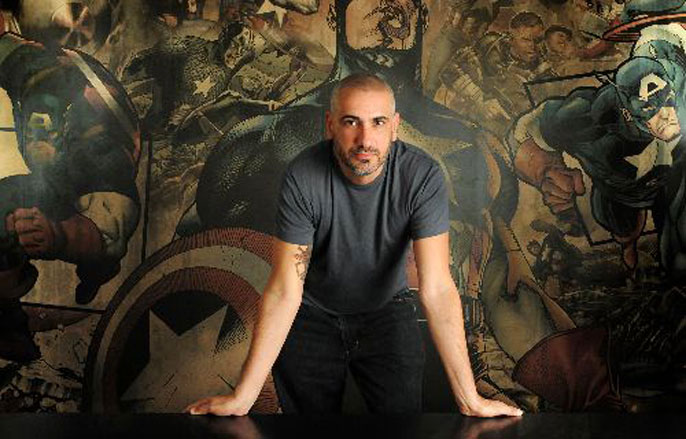 During his tenure as editor-in-chief at Marvel Comics, alumnus Axel Alonso has overseen the creation of a Muslim superhero, a female Thor, a biracial Spider-Man, and a Korean American Hulk.

Sitting in the offices of Marvel Comics in Midtown Manhattan, Axel Alonso tells of the nighttime phone call he once got from his sister-in-law. Her son, Reece, was refusing to go to sleep because he’d heard that the newest Hulk comic book featured the Korean American Amadeus Cho and the boy was convinced he might be the next one “to get the Hulk curse,” as he called it.

Alonso was delighted. Not because his 5-year-old nephew was already a Marvel Comics fan but because Reece, who is Korean American, could see himself in a superhero in a way he never had with the white Bruce Banner.

“Isn’t that beautiful,” says Alonso (Cowell ’87, sociology), a former journalist who has been editor-in-chief at Marvel Comics since 2011. For him, that moment was the crystallization of the work he has done to make comic book characters and their creators reflect the diverse world in which we live.

During his tenure, the 50-year-old Alonso has overseen the creation of a Muslim superhero, a female Thor, and a biracial Spider-Man, along with the Korean American Hulk that set his nephew’s imagination flying. He also signed National Book Award winner and MacArthur genius Ta-Nehisi Coates to pen the latest Black Panther series and hired two black female writers, a rarity in the industry.

All of which has also led to success for Marvel Comics. According to news reports, in 2015, Marvel Comics made $224 million from sales of its comics and trade paperbacks.

Transforming an industry, panel by panel

Alonso talks at rapid-fire pace, and the enjoyment of a job he describes as being like a show runner for The Walking Dead, Game of Thrones, House of Cards, and Modern Family all at the same time is palpable.

He grew up in San Francisco, the son of Mexican and English immigrants. His comic books of choice, he says, were cinematic heroes like The Hulk and Luke Cage — until basketball and girls cooled his ardor at age 12.

But while working on an Alaskan fishing boat to earn money for college, Alonso stumbled across Alan Moore’s Swamp Thing, which, he says, “hit my sweet spot. It was smart and literate and made me go back to see how comics had changed and why.”

After a financially unrewarding stint as a journalist, he got a job as a comic book editor. One of his early tasks at Marvel was editing a seven-issue book titled Truth: Red, White & Black, which set off a wash of criticism from those who thought he’d “ruined” the iconic Captain America character.

To Alonso, having a black man be the guinea pig for a U.S. drug experiment during WWII was a lot more likely than having a white guy like Steve Rogers be injected with an untested serum. Just look at the infamous Tuskegee Study, which allowed untreated syphilis to rampage through 600 black sharecroppers, he says.

By the end of the series, critics — including a prominent reviewer — had changed their minds. The experience, according to Alonso, only cemented his desire to make sure readers of all races, nationalities, and religions could see themselves in the pages of comic books.

“I have mixed-race kids and I want them to see their reflections,” says Alonso, whose wife is of Korean descent.

To that end, his stable of 23 editors and 120-150 writers includes people of diverse backgrounds, religions, and genders.

Just as important as diversity, the 63 to 72 books Marvel Comics puts out each month under Alonso’s stewardship must be rooted in story and in the real world.

“One of our guiding mantras is that you should reflect the world outside your window,” Alonso says. “What are people talking about? What are they worried about? Our stories strive to address these things through allegory and metaphor. We want to speak to the human condition.”

That philosophy is why Marvel asked Coates to reboot the Black Panther series, which focuses on T’Challa, the superhero ruler of the mythical and technologically advanced country of Wakanda in Africa.

Coates’s Black Panther arc tells the story of revolution, which forces T’Challa to reassess his form of government, a monarchy.

“This isn’t a tract or an essay,” Alonso says. “This is an action-adventure narrative that says something about the world.”

Which means, of course, that current times are ripe for a whole new set of storylines and characters, and, for Alonso, that is the biggest challenge of his job: to create exciting and meaningful characters and stories, while at the same time making sure the bottom line is strong.

“The things we do are not just creative risks,” he says, “they are also financial risks.”

So far, Alonso’s vision is paying off.