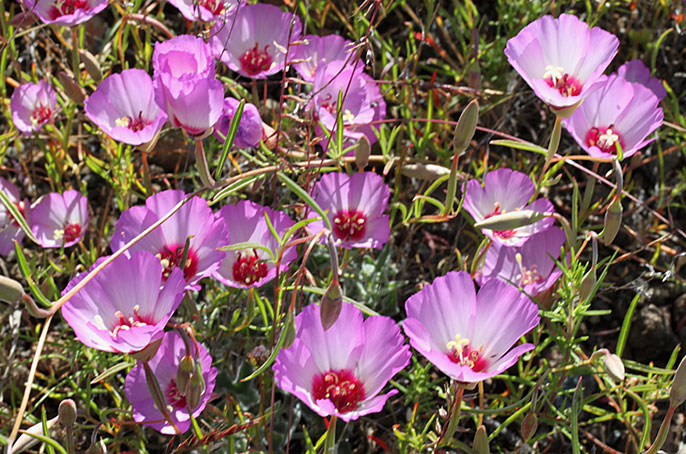 Tracy's clarkia is on the California Native Plant Society list of rare plants endemic to California.

On a bright spring morning at the Donald and Sylvia McLaughlin Natural Reserve, the treasure hunters have assembled and are ready to go. Decked out in hiking gear, they’re prepared for a day in the rugged outdoors. In addition to boots and a hat, everyone totes a trowel, sacks for found booty, and a set of local maps.

It’s true that this place was once home to a gold mine. But no one here is seeking mineral riches. Rather, they’ve joined the California Native Plant Society’s Rare Plant Treasure Hunt, a program that aims to deploy the eyes and expertise of amateur botanists to gather intelligence on the state’s rarest plant species.

“California is an incredibly diverse state with a huge amount of rare plant diversity,” said Danny Slakey, the California Native Plant Society botanist who organized this hunt. “But nearly half our data on rare plants of California are over 20 years old.”

Rare plant reconnaissance is vital for several reasons. For one thing, the information directly improves on-the-ground plant conservation efforts. “We share our data with land managers with the expectation that if they have a more specific location for these plants, and understand their rare status, they can better manage them,” Slakey said.

For another, data on populations and habitat threats is required in order to obtain species protections. Only species established as vulnerable are eligible to be declared threatened or endangered.

Such safeguards came too late for the 28 native plant species that have gone extinct or are no longer found in California. Another 50 species are considered at serious risk: those with fewer than five documented occurrences in the state, and were last seen more than 20 years ago. These and other plants are on the hunt list of “missing” and “most wanted” plants.

McLaughlin Natural Reserve is a promising place to find rare plants. The reserve contains many outcroppings of serpentine soils toxic to most plants. Serpentine endemic plants, found only on these hostile soils, have evolved to cope with these inhospitable sediments. They also tend to be quite rare, and occupy a prominent place on the Treasure Hunt list. Add the reserve’s ample overnight accommodations and meeting facilities, plus permission to collect plants, and McLaughlin, said Slakey, was a natural site to hold this treasure hunt.

Treasure hunt volunteers are asked to report not only that they’ve spotted a rare plant, but also to note its location, population size, habitat and the date. Then, if they have the necessary permits or permission to collect, they collect a reference specimen and submit it to an herbarium.

On the face of it, collecting a plant sample seems like a whole lot of trouble. Why bother to dig up a rare species, arrange it just so on absorbent paper, and squash it for weeks in a plant press? “Without a voucher, it’s just a rumor,” said Slakey, quoting an old taxonomy saying. In other words, the only irrefutable evidence of a species sighting is a physical sample of the organism.

“A future researcher may come along and look at one of the plants we’ve collected and notice, hey, this is way different from everything other specimen under this name. That may be the next rare plant.” Slakey said. In fact, the majority of newly-described plant species are actually from specimens in herbaria.

Training on how to collect and process plant specimens is a key part of the hunt. It adds to the skills of plant enthusiasts, and transforms what they gather into products useful to botanists for decades to come.

For example, treasure hunt finds will also add new records to databases such as the Consortium of California Herbaria that show where species occur. Tracking how those locales change over time can be evidence of the impacts of environmental shifts like climate change.

A new take on biodiversity

“In California there’s an army of people represented by the California Native Plant Society who are interested in plants and enthusiastic about conservation,” said Mishler, who is also director of the plant collections known as the University and Jepson Herbaria at UC Berkeley. “We thought if we combined our project with the expertise these folks have in finding plants, we could fill in the missing data we need and train a large group of people in modern techniques of biodiversity assessment.”

The night before the hunt itself, Mishler and Andrew Thornhill, a UC Berkeley postdoctoral researcher, explained the phylogeny project and its goals to treasure hunt participants. The workshop was sponsored by the National Science Foundation though a grant to Mishler and colleagues.

Since Carl Linnaeus developed modern taxonomy in the mid-1700s, people have classified how organisms are related based on observable characteristics such as leaf shape, plumage color, and body size. Organisms with similar characteristics and interbreed have been considered to belong to the same species.

But with the advent of DNA sequencing, scientists gained the power to measure relatedness directly by comparing genes. “That gives us a much more precise way to understand how the biodiversity is packaged,” Mishler said.

To their surprise, researchers have uncovered a great deal of genetic variation within organisms that were considered single species. DNA analysis shows that some species include lineages that emerged at very different points in time. It’s as though people As a result, the use of species as the unit of diversity looks “very 18th century,” said Mishler.

Fresh samples for a new tree of life

With the California Plant Phylogeny Project, Mishler is aiming high: He wants nothing less than to redraw the family tree for all California plants. The diagram would depict the evolutionary relationships among the 5,300 or so currently-recognized native species, but also establish species groups through genetic analysis.

The information used to draw this phylogenetic tree will come from the DNA of specimens held in museum collections, as well as fresh samples of rare plants not currently in collections. Those collection gaps, of course, must still be filled by treasure hunt participants and others.

The power of phylogenetic maps

Plant phylogeny data combined with mapping technology can answer a multitude of new questions in conservation, climate change, species protection, and more. Maps allow researchers to see, for example, how closely plants from one region are related to those from another. Maps can show how widespread certain lineages of plants are in an area, and which areas could use more conservation protection in the form of a new reserve or park.

Discovering where genetic lineages are found can also aid in conservation. “We can use this information to identify places where there are branches of the phylogenetic tree not covered by preserves. Then we can design parks and protections to fill in those gaps,” Mishler said.

Similar analyses combining genetic and mapping data can demonstrate how entire limbs of the plant family tree branched off. The new lineage information should enable scientists to deduce the driving factors behind speciation. For example, in the case of the serpentine endemics, those factors would be adaptations enabling colonization of a toxic soil type.

“It’s really important that we know what the processes are that produce biodiversity and keep it going,” Mishler said. That knowledge makes it easier to set aside habitats that maintain a healthy degree of biodiversity.

The value of rarity

Maps can also help distinguish whether a plant is rare (few in number), endemic (with a very restricted range), or both, which could make the plant worthy of special conservation treatment.

A rare plant, Mishler said, is valuable in much the same way as an heirloom quilt. “It’s the only one like it in the world, and the maker is gone, so it’s unique. Whereas a blanket from K-Mart, which might keep you just as warm, and might even look like that quilt, isn’t nearly so valuable. Since there’s millions of copies of this one blanket, it has less intrinsic conservation priority than something that is the only one of its kind,” Mishler said.

The California Plant Phylogeny Project will also evaluate when lineages of plants evolved. Some, like redwood trees, are paleoendemics — species that emerged in an earlier era. At the other end of the time spectrum are the neoendemics, recently-evolved lineages that haven’t had time to spread too far from where they first emerged. The serpentine endemics found at McLaughlin Natural Reserve are prime examples of neoendemics.

All these ways to slice and dice categories of plants may seem excessive to a layperson. But it’s in everyone’s interest to save as much biodiversity as possible. “It’s an insurance policy,” said postdoc Thornhill. “Whatever happens in the future, hopefully we’ll have something that can cope with it.” Within the world’s vast array of organisms, some are likely to produce compounds that could cure tomorrow’s diseases, or confer abilities like drought resistance, or provide some other, completely unexpected benefit.

Mishler cites the case of the ginko tree. Common worldwide in the age of the dinosaurs, it was reduced to relict populations in the mountains of China. “When it was rediscovered, it was as if somebody walked up to a real living dinosaur. You knew, even before you examined it, that it would have incredible differences in every kind of trait from known plants because it’s separated from them by so much time,” he said. “Now it’s planted all over the place as a street tree. It has almost no pests; it’s outlived them all.”

Eyes and ears on the ground

With so many uses for rare plant data, Mishler said, the treasure hunt “is not just make-work for the volunteers. Their collections are absolutely essential to science projects now and in the future.”

Amateur botanists are often better positioned than the professionals to do the sampling needed for the hunt and the phylogeny project. Academics can be occupied by the need to write grants, supervise students, and teach classes. They don’t have the time to travel to remote areas to collect, and may be focused on a particular group of plants to the exclusion of all others. By contrast, citizen scientists are often located on the spot, are interested in a particular park or watershed, and can keep an eye out for the appearance of a particular species to collect it. And the large number of plant enthusiasts helps ensure a goodly number of all types of species gets collected.

Collecting with the big picture

Nearly 30 citizen scientists attended the McLaughlin Treasure Hunt. Many said the training added a whole new dimension to their botanical enthusiasm. “I’ve taken plant collecting classes before, but learning the meaning for it in a larger context is really exciting to me,” said Leslie Burkhart. Burkhart has driven all the way from Siskyou County at the Oregon border to attend the event.

“Now I want to build my own plant press and go out and start looking for plants on my own,” said Rachel Powell of Sacramento.

Organizer Slakey called the McLaughlin hunt a great success. “There are a whole lot more plants out here I’m discovering than we have data on currently,” he said.

Since then, Slakey reports, several McLaughlin plant hunters have followed up with collections and rare plant observations — evidence that a growing number of sharp-eyed plant enthusiasts are helping to find and conserve California’s botanical legacy.