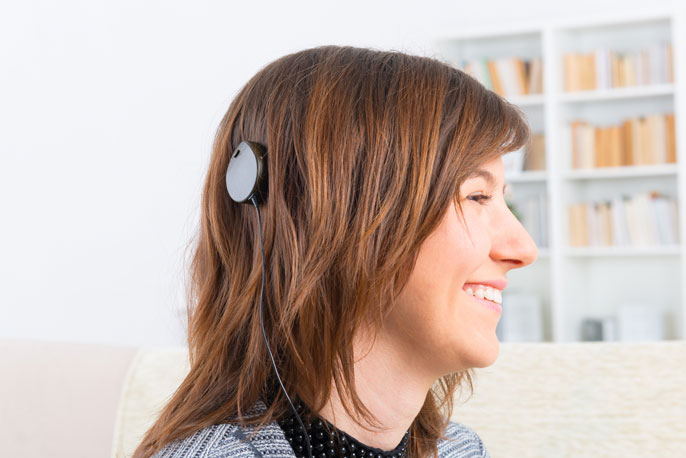 A young woman with a cochlear implant. UC Irvine neuroscientist and professor of otolaryngology John Middlebrooks has been working for years to improve the capacity of cochlear implants to communicate pitch. This could help users pick up on differences in voices and better appreciate music.

Many may have seen the popular videos of awestruck babies who had been born profoundly deaf hearing a parent say “I love you” for the first time.

These moving moments were made possible by surgically placed cochlear implants. Thanks to the devices — which have been in use since the 1980s — nearly a million people around the world have had the experience of hearing a loved one’s voice for the first time or after a period of severe auditory loss. Nevertheless, cochlear implants have some serious limitations.

“Most implant users today, if they’re implanted not long after they become deaf, can expect to understand speech pretty well in a quiet environment without competing voices around,” says UC Irvine neuroscientist and professor of otolaryngology John Middlebrooks. Moreover, a baby who is born deaf and given an implant at about 12 months of age can reasonably be expected to develop very good speech comprehension and production.

“But implant users really suffer in the presence of competing sounds,” he says. “One of the main things that helps a normal-hearing person pick a voice out of a crowd is the pitch of the voice, and implant users don’t get pitch at all. They can’t tell a man’s voice from a woman’s voice. They can’t use pitch cues to know when someone is excited or sad.”

Middlebrooks — alongside assistant professor of otolaryngology Dr. Harrison Lin — is working on an implant that could eliminate this issue. The project is being funded by a five-year grant from the National Institute on Deafness and Other Communication Disorders, a branch of the National Institutes of Health. The novel device, which would enable users to detect a range of pitches, is now undergoing efficacy and safety testing. Middlebrooks is confident about receiving Food and Drug Administration approval for the first human trials within the next five years.

Current implants have an external portion (a microphone and speech processor) and an internal portion (a transmitter and electrode array), which process sound and electrically stimulate nerve fibers in the inner ear’s snail-shaped cochlea. But the electrodes are too far away from the auditory nerve, limiting the frequencies heard by users. The new implant, which is similar in structure, precisely targets the low-frequency fibers of the auditory nerve that send pitch data.

“I’m honored to have the opportunity to work on this project that, I believe, will greatly enrich the quality of life for deaf people.”
– John Middlebrooks

Middlebrooks has been developing the intraneural device since 2007, when he got promising results. “We’ve shown in animal studies that if you can stimulate the low-frequency areas selectively, you get much better transmission of the timing information that’s needed for pitch perception,” he says.

And this wouldn’t be the only benefit of the new instrument. Fan-Gang Zeng, professor of otolaryngology and director of UC Irvine’s Center for Hearing Research, notes: “John will have great potential to improve implant users’ ability to appreciate music.”

Middlebrooks understands the value of music from the perspectives of both a hearing researcher and a choir singer. “In auditory science,” he says, “I run into a lot of musicians, because they’re interested in sounds.”

When Middlebrooks was an undergraduate at the California Institute of Technology, he chose to study neuroscience for two reasons: He was fascinated by the subject, and it was a rapidly growing field. However, of its main subdivisions, hearing science was not gaining as much attention as the others. “At the time, I thought that if I wanted to be able to look back in 40 years and see progress, there are a lot of straightforward questions I can answer and things I can do in hearing science,” Middlebrooks says.

Now he hopes to retire in a few years after the implant is approved for human trials. “I’m honored to have the opportunity to work on this project that, I believe, will greatly enrich the quality of life for deaf people,” he says.