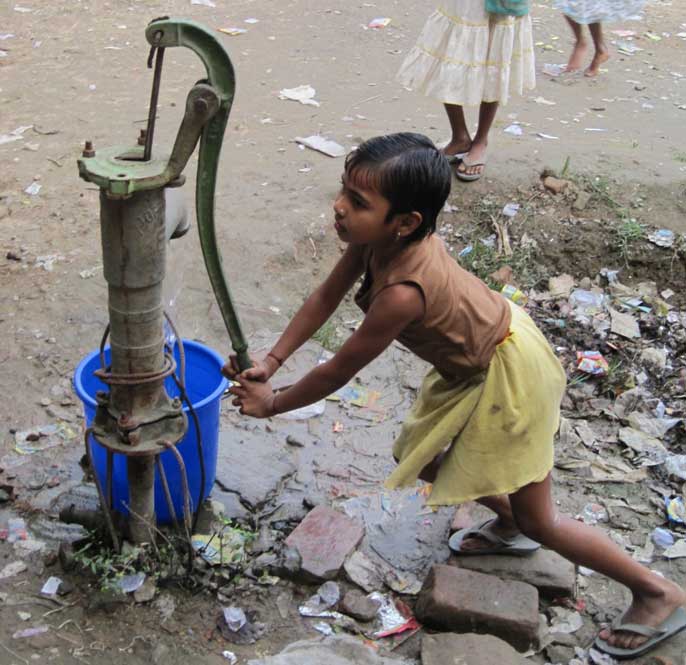 In India and Bangladesh, millions of people depend on well water, which often is contaminated by arsenic.

When Lawrence Berkeley National Laboratory scientist Ashok Gadgil set out to solve an insidious public health problem afflicting South Asia, arsenic contamination of groundwater, he knew the hard part would not just be inventing the technology but also ensuring a way to sustain its long-term use on a large scale.

“A lot of technologies to remove arsenic on the community- and household- scale have been donated. But if you go to these villages it’s like a technology graveyard,” said Gadgil, who heads the Lab’s Environmental Energy Technologies Division and is also a professor of civil and environmental engineering at UC Berkeley. “One study found that more than 90 percent failed within six months, and then were abandoned to rust in the field.”

So Gadgil and his lab came up with ECAR, Electrochemical Arsenic Remediation, which binds arsenic using iron dissolved in water. Their innovation was two-fold. They created a technology that is exceptionally effective, inexpensive, and easy to maintain. And just as importantly, from the start they conceptualized a business model for implementing the technology in a way that creates incentives for its longevity.  Now Indian company Luminous Water Technologies has licensed ECAR and plans to bring it to arsenic-affected villages throughout India and Bangladesh.

“Technology alone is not enough. It has to fit within a sustainable system based on partnerships with local entities,” said Susan Amrose, who has worked on ECAR since 2008 as the lead project scientist in Gadgil’s lab. “Other technologies have failed because there is no system of incentives or money or knowledge to keep them running. The key difference with ECAR is that it was designed to fit within a local system aimed at achieving successful social placement — so a flow of funds pays for ongoing operation, maintenance, and social marketing, without turning it into privatized water.”

Arsenic-contaminated groundwater can be found all over the world, including in the United States, but the problem is particularly acute in South Asia, where tens of millions of people in India and Bangladesh get their drinking water from tube wells highly contaminated with arsenic, almost all of it occurring naturally. Arsenic poisoning, or arsenicosis, can cause painful lesions, diabetes, cancer, and blood vessel diseases that often lead to gangrene, amputation, and premature death.

Amrose has seen the devastation first-hand in her travels to affected villages. “Over time you’ll see people get worse and worse,” she said. “There was one man who in 2009 had lost his right pinkie finger by amputation due to arsenic. In 2011 he lost his right hand, and in 2013 lost his entire arm. Earlier this year he committed suicide. In some areas, you’ll see a lot of people with black spots on their palms, an external sign of arsenicosis. And a lot of things you won’t see. People will be linked with arsenic and ostracized, or young people unable to marry because their family lives in an area that has arsenic.”

One of the aims of Gadgil’s lab is to reduce the time lag between invention and commercialization from 18 years, the current norm, to 10 years. “We’re actually quite on target with ECAR,” Amrose said.

They started work on the concept in 2005. They’re now preparing a 10,000 liter-per-day trial over 15 months. “As we get to larger-scale field trials we’re intent on conducting them with our field partners,” Amrose said. “By working on a common goal, we get to effectively transfer the technology know-how, while they guide us towards what needs to be done to effectively scale up.”

Luminous Water Technologies was founded by an Indian serial entrepreneur, Rakesh Malhotra, with the aim of providing clean drinking water and commercializing new technologies in the drinking water market. Luminous’ current focus is on reverse osmosis systems, and they were looking to diversify in other water technologies when they identified ECAR for licensing.

“Arsenic poisoning is an endemic problem in India and Bangladesh and is seen as a silent killer,” said Luminous Managing Director RS Rajan. “It is Dr. Gadgil’s conviction and perseverance which has been a key motivating factor in Luminous opting for this technology. Luminous Water, with its reach across India and longstanding business record, will work towards commercializing this technology along with Berkeley Lab and create a sustainable module to provide solutions to impacted communities.”

From electricity to rust

ECAR works by using electricity to quickly dissolve iron in water. This forms a type of rust that readily binds to arsenic; the rust can then be separated from the water through filtration or settling. For the remaining waste Gadgil’s lab is now working on partnerships with cement and concrete companies to do research on embedding the sludge in concrete.

“We find in early tests that it’s very well stabilized, and the arsenic is not getting back into the environment,” Amrose said. “We expect and hope this form of sludge management will be viable and pass environmental approvals for market scale-up. Until then Luminous will dispose of the waste according to prevailing pollution control guidelines.”

ECAR is envisaged to operate as a village-owned micro utility in the villages where it is installed. Luminous would operate and maintain the utility and sell the water, with concurrent support for social marketing and education.

Last year ECAR was awarded a UC Proof of Concept Program Commercialization Gap Grant to see if it could be used to remediate arsenic-contaminated groundwater in California. Rural communities in California are often too poor to afford commonly available arsenic remediation techniques, and most techniques are only cost effective on larger scales, such as the city water supply system. As a result, many California residents drink water with dangerous levels of arsenic every day. The burden falls disproportionately on minorities and residents of lower socioeconomic status, particularly migrant farming communities and Native American communities.

ECAR has yet to be proven in California groundwater, which is known to contain a different composition of interfering ions from that in South Asia. This grant funds a proof-of-concept demonstration of ECAR in California to reduce entry risk for potential licensees.

The ECAR effort was initiated at Berkeley Lab with internal seed funds (from Laboratory Directed Research and Development funding) in 2005. It is being further developed in part with funding from the Development Impact Lab at UC Berkeley. ECAR technology is available for licensing in the United States.