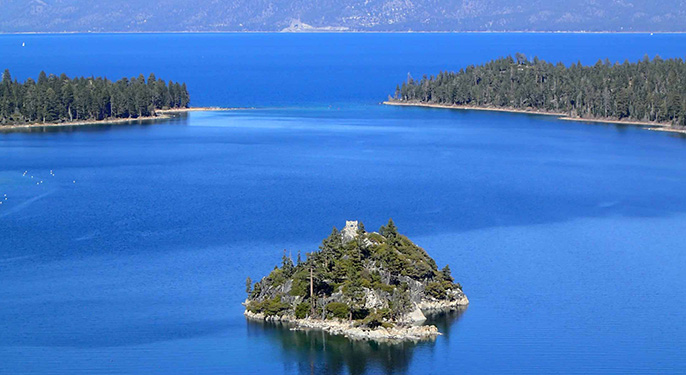 A Scripps Institution of Oceanography-led study on how natural and man-made sources of nitrogen are recycled through the Lake Tahoe ecosystem provides new information on how global change may affect the iconic blue lake.

“High-elevation lakes, such as Lake Tahoe, are sentinels of climate change,” said Lihini Aluwihare, associate professor of geosciences at Scripps Institution of Oceanography at UC San Diego. “Small changes in the lake’s chemistry can have big impacts on the entire ecosystem.”

Lake Tahoe’s nitrogen concentration is one of several factors that helps maintain its crystal clear waters. To keep Tahoe blue in the future, the researchers say it’s important to keep a close eye on the nitrogen balance in the ecosystem over time.

The study, published in the Feb. 23 issue of the journal Nature Communications, tracked nitrogen, including that produced from the burning of fossil fuels, in the Lake Tahoe ecosystem. Nitrogen can affect both the productivity of lake food webs and the composition of the microbes that support nutrition for those food webs.

A main goal of the study was to understand how the nutrient is being cycled through the food web. Using radiocarbon isotope techniques, the researchers dated the molecular components and discovered that some nitrogen was preserved in proteins and unavailable for biological consumption for 100 to 200 years.

“It is unusual for organic nitrogen to be sitting around for long periods of time in an ecosystem,” said Aluwihare, a co-author of the study. “This changes our view of how quickly nutrients are recycled in high-elevation lake ecosystems.”

The Scripps Oceanography and UC Davis Tahoe Environmental Research Center team filtered water from three lakes within the Lake Tahoe basin to collect molecules dissolved in the water. Their findings suggest that something is preventing the efficient recycling of nitrogen in these ecosystems, and one possibility may be phosphorus limitation of the recycling bacteria (bacteria need both nitrogen and phosphorus to live).

“It’s important to study the life cycle of nitrogen in the ecosystem since increasing atmospheric nitrogen deposition can alter the food web in the lake,” said Stuart Goldberg, lead author of the study and a former post-doctoral researcher at Scripps Oceanography. “Just like a home garden, the health of lake ecosystems relies on the balance of nutrients like nitrogen and phosphorus.”

The Lake Tahoe ecosystem is experiencing rapid change due to regional warming and shifts in precipitation patterns, as well as increased atmospheric nitrogen deposition, which has begun to alter the nutrient balance in the lake.

“This investigation has found that dissolved organic matter can store nitrogen in lake systems,” said Lina Patino, program director for the Earth Sciences Postdoctoral Fellowship Program at the National Science Foundation, which funded the research.  “This result is important because to understand the environmental health of lakes, we need to know the sources of the nutrients and where they are stored.”

The study’s co-authors include Goldberg, presently at the University of Hawaii; Aluwihare and Ian Ball at Scripps Oceanography; Brant Allen and Geoffrey Schladow at UC Davis; Andre Simpson, Hussain Masoom, and Ronald Soong of the University of Toronto; and Heather Graven of Imperial College in London.