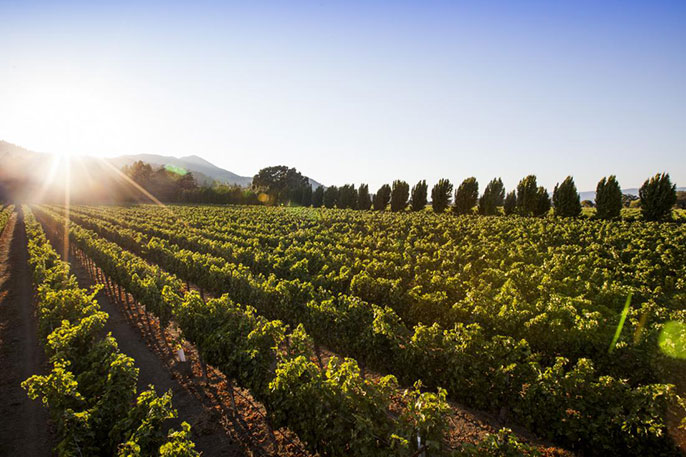 A local mix of bacteria and fungi, along with soil and climate, may give a vineyard its distinct "terroir."

Regionally distinctive groups of bacteria and fungi, associated with local climate and environmental conditions, may leave a very specific “fingerprint” on a wine’s chemical composition, report University of California, Davis, researchers who collaborated on a new study with two Napa Valley wineries.

The researchers analyzed more than 200 commercial wine fermentations at Far Niente and Nickel & Nickel wineries in the Napa Valley. Data from the study, to be reported June 16 in the online journal mBio, provide new evidence that microbes influence a wine’s terroir, or the wine’s distinctive regional characteristics.

The study also suggests that such microbial signatures associated with predictable chemical profiles of wine might provide a valuable new quality-control tool for the multibillion-dollar global wine industry.

“To our knowledge, the microbial communities associated with harvested grapes have never before been used to predict the qualities of the finished wine in this fashion,” said co-author David Mills, a professor of food science and technology. “This could present a whole new paradigm for ensuring quality of wine and many other agricultural products.”

He noted that the study also suggests that there may be economic incentives for using sustainable practices to protect regional microbial biodiversity in many different agricultural areas.

“In other words, if your region or winery is producing a high-quality product, you might want to know that your favorite microbial partners are showing up every year,” Mills said.

Winemaker and study co-author Greg Allen of Far Niente and Nickel & Nickel wineries said that the study provided powerful tools for characterizing the microbial ecologies inhabiting the wineries’ vineyards and the persistence of those microbial influences through the winemaking process.

“Our eyes have been opened to the fact that microbial ecologies and metabolic products arise with unique patterns across our various vineyards, and that vineyard-specific conditions form the basis for this,” Allen said.

“It’s exciting for us to know that fungi and bacteria are important determinants of terroir, which, in turn, is inspiring for continued study,” he said.

In a 2013 study, Mills and colleagues demonstrated that different California grape-growing regions have distinct, identifiable microbial patterns that are correlated with the grape variety, as well as local weather conditions and geography. They suggested that these microbial populations are part of wine’s terroir.

At Far Niente and Nickel & Nickel wineries, the researchers collected nearly 700 samples of grape musts, or crushed grapes, and wine during various stages of fermenting and aging for cabernet sauvignon, a dry red wine, and chardonnay, a dry white wine.

The two wineries are located 2 km (less than 1.5 miles) apart in the Napa Valley community of Oakville, and the samples were derived from grapes grown throughout Napa and Sonoma counties.

“We have long believed that site selection is crucial to what makes our vineyards special towards achieving our wine style goals, whether they be single-vineyard wines or blends,” said winemaker Allen. “Through our viticultural and winemaking practices, we have learned to make the most of our various vineyard sites.”

Allen noted that the understanding of site microenvironment has historically focused on measurements of geological makeup and soil composition, together with observations of topology, site orientation and local weather patterns. However, the diversity and biological contributions of the microbial communities intrinsic to the wineries’ vineyards have been far less understood, he said.

Analyses of the samples in the new study indicated that the microbes in the grape musts were associated with specific chemical products in the finished wines, suggesting that the microbes could serve as biomarkers for predicting the chemical composition of wines.

Such biomarkers could be useful in predicting whether specific vineyard sites might be suitable for producing certain wines and also for preventing microbial issues during abnormal vintages, such as those that might result from poor weather during harvest.

The researchers emphasize, however, that such biomarkers probably could not be used to artificially mimic the many complex factors involved with wine terroir.

Microbial terroir and other agricultural products

“Wine is an incredibly useful model for testing the concept of microbial terroir, and it is possible that there are similar relationships between regional microbial patterns and the final quality of other agricultural products,” Mills said.

He added that further studies are needed to confirm whether the microbial communities are merely associated with the chemical composition of the finished wine or if those microbes actually cause changes that result in specific flavors, aromas and other important sensory qualities of wine.

Funding for the study was provided in part by the U.S. Department of Health and Human Services, the National Institute of General Medical Sciences, and the Louise and Ray Rossi Endowment to the Department of Viticulture and Enology at UC Davis.