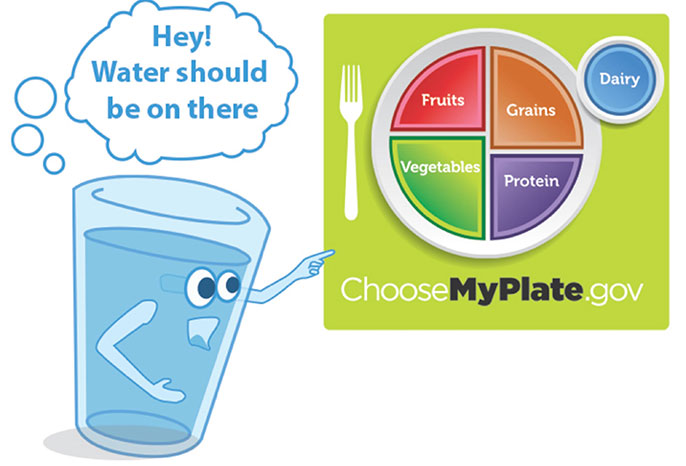 Nutrition scientists issued their findings to the U.S. Department of Agriculture (USDA) and U.S. Department of Health and Human Services (HHS) last month on the proposed 2015 Dietary Guidelines for Americans. During the open comment period, which ends April 8, the University of California Nutrition Policy Institute (NPI) is encouraging the public to ask the government to make water the drink of choice in its final version of the 2015 guidelines and add a symbol for water on MyPlate.

MyPlate is the infographic used nationally to portray the recommendations in the Dietary Guidelines for Americans.

“The Dietary Guidelines are the nutrition bible for Americans, and MyPlate is used to teach children and adults alike how to follow them,” said Lorrene Ritchie, NPI director. “Americans have the privilege to weigh in on the guidelines and influence the outcome. It's an opportunity that shouldn't be ignored.”

The Nutrition Policy Institute was created in 2014 by UC Agriculture and Natural Resources, the division of the UC system charged with sharing research-based information with the public about healthy communities, nutrition, agricultural production and environmental stewardship. The institute seeks to improve eating habits and reduce obesity, hunger and chronic disease risk in California children and their families and beyond.

Much of Ritchie's research over the course of her 15-year career with UC has focused on the causes of and solutions for child obesity, which has led her to become a strong advocate for drinking water.

“It is clear from the evidence that a major contributor to obesity is sugary drinks," Ritchie said. "And the healthiest alternative to sugary drinks is plain water.

Before the 2015 Dietary Guidelines Advisory Committee released its report last month, NPI asked the committee to include strong language encouraging the consumption of water as the beverage of choice for adults and children. The committee's report says, “Strategies are needed to encourage the U.S. population to drink water when they are thirsty. Water provides a healthy, low-cost, zero-calorie beverage option.”

“I was very pleased to see that recommendation in the committee's report,” Ritchie said.

Now Ritchie said she is hopeful that the guidelines' most-used educational companion, MyPlate, will reflect the committee's statement. The public can help.

“We are urging people to send comments to the USDA,” Ritchie said. “Tell Washington to make water first for thirst and ask the USDA to reinforce it with an icon for water on MyPlate.”

Anyone can submit comments on the report and many special interest groups, industry representatives, advocates and policymakers are expected to do so. USDA promises to read all comments, so the opinions of concerned individuals — such as parents, teachers, doctors, nurses, etc. — will also carry significant weight.

The UC Nutrition Policy Institute developed a “Take Action!” page on its website with easy-to-follow guidelines for submitting comments on the Dietary Guidelines for Americans.