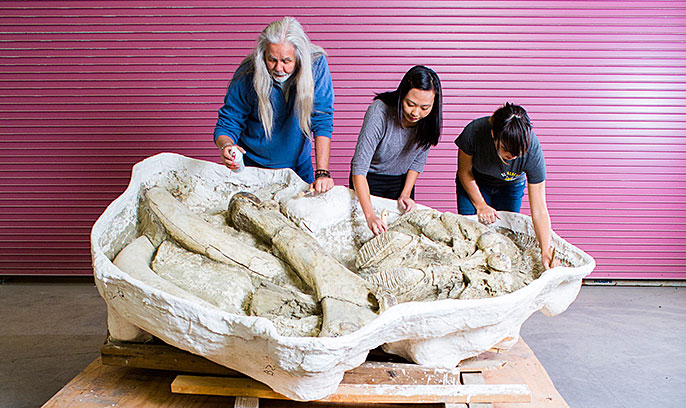 The youngest University of California campus is now the steward of some ancient remains.

Columbian mammoth bones dating back to the last Ice Age were transferred recently to a storage facility at UC Merced's building at Castle Commerce Center. The bones, including a skull, tusks and molars, were discovered by Caltrans in Madera County last fall during construction on Highway 99. The agency's leadership wanted to make sure the bones remained in the area and were available to the public, making UC Merced a natural fit for them.

Dean Mark Aldenderfer of the School of Social Sciences, Humanities and Arts oversaw the bones' move to the university with Technical and Space Allocation Manager Steve Rabedeaux. Aldenderfer, an archaeologist, will spend time this fall stabilizing the remains with the goal of having them ready to be displayed this spring in the Leo and Dottie Kolligian Library.

UC Merced professors in the School of Natural Sciences may also use the bones for research projects, such as providing a more accurate age of the bones as well as learning more about its diet and environment.

"UC Merced with its emphasis on education and research is a great place for these mammoth bones," Aldenderfer said. "The mammoth will help us learn what the San Joaquin Valley was like thousands of years ago and offer the public a glimpse into the past."

The mammoth bones were found alongside the partial remains of ancient dogs, horses, bison, camels and antelope.

Columbian mammoths grew to be up to 13 feet tall and weigh 10 tons, according to the Denver Museum of Nature and Science. They roamed North America between 100,000 and 13,000 years ago. Their tusks could grow as long as 14 feet long, and their teeth were designed to chew grass.