Inspired by the fist-like club of a mantis shrimp, a team of researchers led by University of California, Riverside, in collaboration with University of Southern California and Purdue University, have developed a design structure for composite materials that is more impact resistant and tougher than the standard used in airplanes.

“The more we study the club of this tiny crustacean, the more we realize its structure could improve so many things we use every day,” said David Kisailus, a Kavli Fellow of the National Academy of Science and the Winston Chung Endowed Chair of Energy Innovation at the UC Riverside’s Bourns College of Engineering.

The peacock mantis shrimp, or stomatopod, is a 4- to 6-inch-long rainbow-colored crustacean with a fist-like club that accelerates underwater faster than a 22-calibur bullet. Researchers, led by Kisailus, an associate professor of chemical engineering, are interested in the club because it can strike prey thousands of times without breaking.

The force created by the impact of the mantis shrimp’s club is more than 1,000 times its own weight. It’s so powerful that Kisailus needs to keep the animal in a special aquarium in his lab so it doesn’t break the glass. Also, the acceleration of the club creates cavitation, meaning it shears the water, literally boiling it, forming cavitation bubbles that implode, yielding a secondary impact on the mantis shrimp’s prey.

Previous work by the researchers, published in the journal Science in 2012, found the club is comprised of several regions, including an endocuticle region. This region is characterized by a spiraling arrangement of mineralized fiber layers that act as shock absorber. Each layer is rotated by a small angle from the layer below to eventually complete a 180-degree rotation.

In a paper “Bio-Inspired Impact Resistant Composites,” just published online in the journal Acta Biomaterialia, the researchers applied that spiraled, or helicoidal, layered design when creating carbon fiber-epoxy composites. Composites with this design structure could be used for a variety of applications, including aerospace and automotive frames, body armor and football helmets.

In experiments outlined in the paper, the researchers created carbon fiber-epoxy composites with layers at three different helicoidal angles ranging from about 10 degrees to 25 degrees.

They also built two control structures: a unidirectional, meaning the layers were placed directly on top and parallel to each other, and a quasi-isotropic, the standard used in the aerospace industry, which has alternating layers stacked upon each other in an orientation of 0 degrees (first layer), -45 degrees (second layer), +45 degrees (third layer), 90 degrees (fourth layer) and so on.

The goal was to examine the impact resistance and energy absorption of the helicoidal structures when they were struck and to quantify the strength after the impact.

The researchers used a drop weight impact testing system with a spherical tip that on impact creates 100 joules of energy at USC with their collaborator, professor Steven R. Nutt. This replicates testing done by the aircraft industry. Following the tests, they measured external visual damage, depth of the dent and internal damage by using ultrasound scans.

In the external damage category, the unidirectional samples split and completely failed. The quasi-isotropic samples were punctured through the backside and had significant fiber damage. Although the helicoidal samples showed some splitting of fibers, they were not punctured completely through.

In fact, the dent depth damage to all of the helicoidal samples was 20 percent to 50 percent less than the quasi-isotropic samples.

The ultrasound tests showed that with the helicoidal samples the damage spread laterally within the structure, rather than catastrophically rupturing through, as the quasi-isotropic samples did.

The researchers then compressed the samples until they broke. Their results showed that the helicoidal samples, in general, displayed a significant increase, about 15 percent to 20 percent, in residual strength after impact compared to the quasi-isotropic samples.

Future research by the team will incorporate a variety of new materials as well as potential insights from this and other organisms they study. Kisailus recently learned he has been selected to receive a $7.5 million Department of Defense grant to continue this work.

“Biology has an incredible diversity of species, which can provide us new design cues and synthetic routes to the next generation of advanced materials for light-weight automobiles, aircraft and other structural applications,” Kisailus said.

The research was funded by the Air Force Office of Scientific Research and the National Science Foundation. 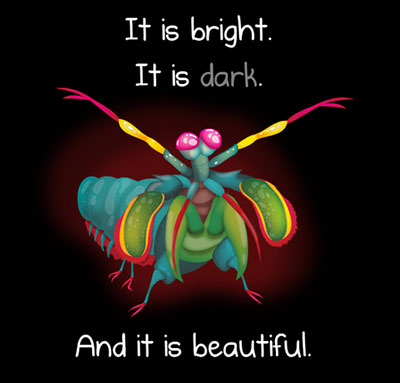 The beautiful mantis shrimp
Genghis Khan bathed in sherbet ice cream: This is how The Oatmeal described the mantis shrimp.
UC Research Tumblr