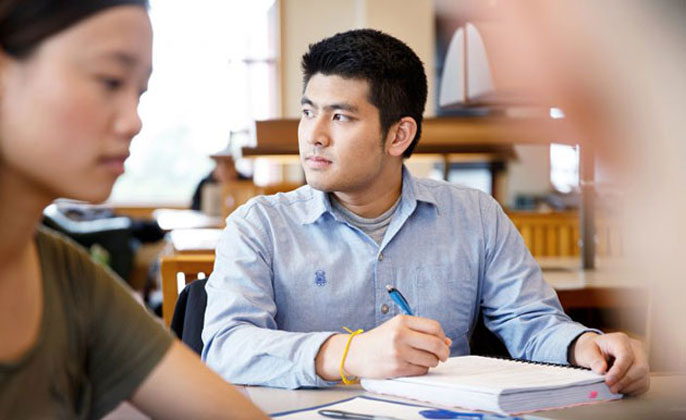 Jirayut Latthivongskorn, co-founder of Pre-Health Dreamers, was one of the 30 Under 30 selected by Forbes in the Education category.

More than two dozen UC alums have landed on the 2017 Forbes’ 30 Under 30 list, a compilation of young change makers and innovators who are transforming business, technology, finance, media and culture.

This year’s list includes people with ties to virtually every UC campus in fields that run the gamut. Forbes editor Randall Lane said in a press release that the list — which includes 30 honorees in each of 20 categories — spotlights young leaders who are challenging conventional wisdom and rewriting the rules for the next generation.

“These are the people who will run every field for the next 50 years,” Lane said.

Here are a few of UC’s honorees:

Fiance launched The House Fund last spring, a $6 million preseed and seed-stage venture fund. It is the first investment fund solely dedicated to startups developed by UC Berkeley students, faculty and alumni. Since its launch in April 2016, it has invested in more than 20 companies across fields such as robotics, artificial intelligence and education. Along with investment support, The House Fund provides mentorship opportunities to help its budding entrepreneurs succeed.

More: UC Berkeley: A fund for startups built by — and for — Berkeley founders

A UC Davis alum and a doctoral student at UC Riverside, Cai helped develop a versatile, relatively nontoxic, and efficient way to convert raw agricultural and forestry residues and other plant matter into biofuels. The patented method brings researchers closer to solving the long elusive goal of producing fuels and chemicals from biomass at high enough yields and low enough costs to become a viable alternative or replacement for petroleum-based fuels and chemicals.

Downing, who recently joined UC Irvine as an assistant professor of biomedical engineering and earned his doctorate from UC Berkeley, studies how extracellular signals can influence the final fate of cells. His discoveries have larger implications in the field of regenerative medicine and could lead to advances in spinal cord repair.

Sumekh’s work to end hunger on college campuses got its start while she was an undergrad at UCLA. She and two friends came up with the idea of letting students donate unused points on their meal plans to others on campus and in the community who needed the food. Today, her nonprofit has served more than 1.2 million meals across the country and has more than 20 chapters, including multiple UC campuses.

Gymrek, a recent addition to UC San Diego with dual appointments in the departments of Computer Science and Engineering and the School of Medicine, studies human genomics. Her focus is on short tandem repeats (STRs) — often dismissed as junk DNA. She has developed an algorithm that allows STRs to be analyzed at a populationwide scale, helping to shed light on how these small genetic segments cause changes in different human traits.

Kozinsky, a graduate of the UC Santa Barbara Environmental Studies Department, came up with the idea for his company StudySoup while he was still a student. He and fellow UC Santa Barbara alum Jeff Silverman realized that there is a single solution to two common problems university students encounter: colleges that don’t provide enough peer-to-peer learning resources and being short on cash. StudySoup solves both issues through a peer-to-peer learning marketplace that lets students create their own original high-quality study materials and sell them to students who need them. The company now has more than 500,000 students in its network.

Ponchick, a UC Santa Cruz alum, co-founded the Repost Network to help people make a living from the music they post to SoundCloud. The platform helps musicians protect their original music, monetize their work, and even create marketing campaigns to share new tracks. The Los Angeles startup now helps some 3,000 musicians — from Wacka Flocka Flame to Mayer Hawthorne — in exchange for roughly 30 percent of their streaming income.

All Forbes 30 Under 30 UC honorees by category