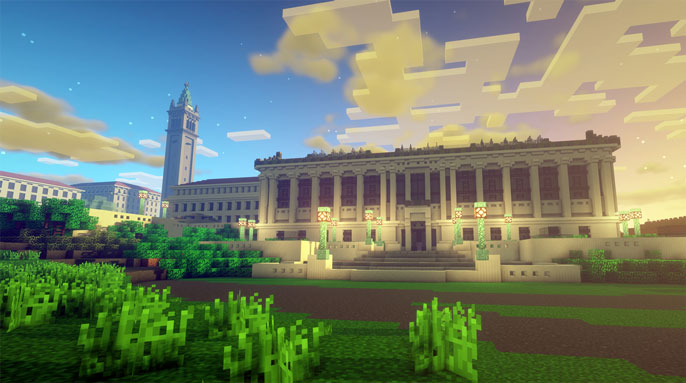 While campus is closed, a team comprised mostly of Berkeley students is creating a virtual version of campus, including Doe Library and the Campanile, via the video game Minecraft.

Imagine a place where social distancing isn’t necessary — where you can gather with friends and resume life as normal, as if COVID-19 and the chaos it has wrought were but a distant memory.

Such a place actually exists — and, no, it’s not Georgia.

Enter the University of Blockeley, a student-led effort to build, one block at a time, the UC Berkeley campus on “Minecraft,” the wildly imaginative (and massively popular) video game. In the expertly crafted virtual world, you can walk through Sather Gate, gaze upon the iconic Campanile, encounter campus’s ubiquitous Kiwibots, and spot Berkeley’s famed peregrine falcons. And, even amid the closures, you can soak in the architectural glory of the campus’s libraries.

The effort to build the UC Berkeley campus started just weeks ago, in an age when each day feels like a year. Inspired by a Facebook comment suggesting someone build a campus on “Minecraft” where students could receive their diplomas virtually, Bjorn Lustic, on a break from his studies at Berkeley, started the server in mid-March and quickly got to work.

The effort humbly began as “a fun little thing to do,” Lustic said, with a small team that included his friend Hunter Hall ’20 (an astrophysics major) and their siblings. Just over a month later, the crew has expanded to nearly 100, all working toward the same goal: to build campus — or at least as much of it as possible — in time for its graduation day debut.

If you build it …

At the University of Blockeley, the libraries are reimagined in stunning detail — the kind that can only be borne from affection, or at least a deep familiarity.

Brian DeBisschop, a high school student who counts Berkeley as his top-choice school, has created more than 20 buildings in about three weeks of working on the project, including the exterior “shell” of Doe and Bancroft. Building Bancroft, DeBisschop said, was “surprisingly easy” — the dimensions translated well to “Minecraft” and the design is relatively straightforward. It took him less than an hour to get everything to his liking.

But Doe was a different story. To re-create the neoclassical building, which in real life was designed by architect John Galen Howard, DeBisschop had to spend some time planning in order to make sure the north and south facades — with their contrasting designs — were proportional to each other, with a scale as close to real life as possible. Pulling that off took several hours over the course of a few days, he said.

Hall, the astrophysics major, is currently at work on Morrison Library. “I love this library because of its contrast to the rest of the libraries on campus,” he said, citing its distinctive dark wood, seating, busts, and selection of books. Some of Hall’s favorite books of all time are housed at Morrison — specifically, on the second floor, surrounding the easternmost table. Hall had to use plugins — or add-ons for “Minecraft” servers — for some of the finer touches. As a nod to one of his favorite books, he laid “Out of My Later Years” by Albert Einstein on the table, its pages open, as if it were being read.

With majors including engineering, computer science, and astrophysics, the University of Blockeley’s builders exhibit an extreme attention to detail and laserlike precision. To generate Berkeley’s terrain, they relied on data from NASA’s Shuttle Radar Topography Mission, which in 2000 mapped nearly 80 percent of the Earth’s land surfaces from the space shuttle Endeavour. Builders have used Google Maps and Google Earth as reference tools and for measuring distances and altitudes.

But that exacting spirit is paired with an equal-sized dollop of outside-of-the-box thinking. After all, one block — the foundational building unit in “Minecraft” — is the equivalent of a cubic meter, an increment that doesn’t always translate to the real world, making flexibility and adaptability essential.

And then there are the materials: Although some building mediums are a no-brainer (in-game quartz is a good substitute for real-life marble, for example), sometimes builders have to get creative. To bring to life the C. V. Starr East Asian Library, with its shimmering bronze-lattice facade, builders had to overlay two types of materials — brown concrete and iron fencing. The result is uncanny.

With the exteriors of buildings nearly finished, builders are turning inward. Moffitt Library was among the very first buildings to get a completed interior, “probably because most people know it like the back of their hand,” said Eli McAmis ’21, a chemical biology major who worked on parts of the undergraduate library.

“Even though a lot of us are away from Berkeley, just hanging out with the other builders, talking with these guys, it kind of showed me that it’s really the students that make up campus life,” said Elliot Choi ’20, a senior on the team who is studying economics and data science. “Seeing that embodied in a virtual version of Berkeley is really amazing.”

‘Freedom to be yourself’

Each day, virtual commencement gets closer to reality. The ceremony is slated for the same day as the real-life one was scheduled, May 16. Although the details are in the works, organizers plan to have an in-game ceremony as well as a livestream, so people without “Minecraft” can attend, from anywhere.

“‘Minecraft’ is the perfect virtual space for this event because it gives you total freedom to be yourself,” said Lustic, who studied cognitive science and computer science at Berkeley. “We can see how these virtual spaces are almost as important as a physical space.”

As of April 22, more than 600 people said they are going to attend the commencement, and over 1,000 have expressed interest on Facebook.

Even with the uncertainty each day brings, the project provides some relief, and a sense of purpose. When visitors swing by the server to check things out, they often are taken aback by the work of the University of Blockeley team — by a building that carries special meaning to them, perhaps, or a detail that was replicated just right.

“You can feel the amazement and happiness that people are experiencing because of it,” said Christian Nisperos ’23, a mechanical engineering major who has been working on the project since its early days. “I was scrolling through some of the comments on Facebook that were like, ‘I got a little teary-eyed looking at this building.’ …

“It’s very fulfilling hearing all of that, and it helps motivate us to build even more.”