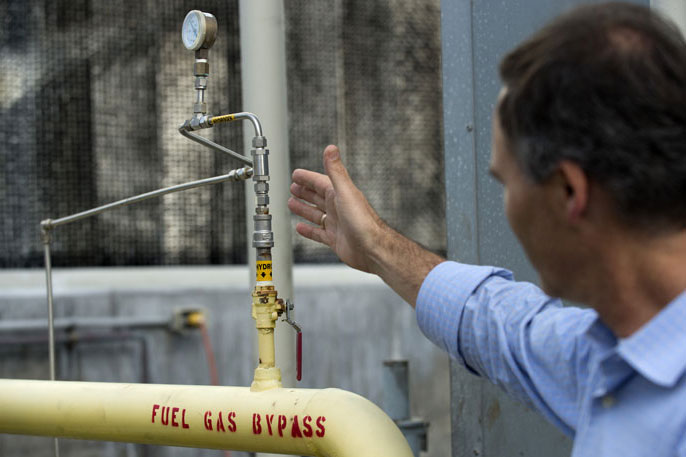 Jack Brouwer, UC Irvine associate professor of mechanical and aerospace engineering and civil and environmental engineering, points to the site at which renewable hydrogen gas is injected into UCI’s natural gas supply line.

University of California, Irvine engineers have successfully implemented the first power-to-gas hydrogen pipeline injection project in the United States, demonstrating the use of excess clean electricity that would otherwise go to waste.

P2G is a technique for converting surplus sustainable energy from solar panels or wind farms into hydrogen, which can be blended with natural gas and utilized in everything from home appliances to power plants. The renewable fuel can also be stored in containment vessels for later use, such as in hydrogen fuel cell vehicles.

“One of the big challenges we’ve faced in adding wind and solar to the grid is what to do with the excess electricity,” said Jack Brouwer, associate director of its Advanced Power & Energy Program. “We’ve shown you need not halt renewable power generation when demand is low. Instead, the excess electricity can be used to make hydrogen that can be easily integrated into existing natural gas pipeline infrastructure.”

The pilot project began last summer with funding from the Southern California Gas Co. and the participation of Proton OnSite, provider of an electrolyzer that produces hydrogen from electricity and water. APEP engineers worked with Facilities Management technicians to install the new equipment adjacent to the campus’s power plant. Since then, the process has been closely monitored by researchers trying to determine whether P2G is feasible on statewide or regional power grids. Such systems are currently in place in Germany and Canada.

“Our initial testing indicates smooth operation for this first successful U.S. proof of concept,” said Brouwer, associate professor of mechanical & aerospace engineering. “Storage of the hydrogen in existing natural gas infrastructure could produce a massive hydrogen battery that could become the most important technology for enabling a 100 percent renewable future.”

The central component of the process is the electrolyzer, which takes in water and uses excess clean electricity to power an electrochemical reaction that splits it into hydrogen and oxygen. The latter is released into the atmosphere, and the hydrogen is compressed and sent about 60 feet through a pencil-thin, stainless steel tube to an injection point in UC Irvine’s natural gas pipeline. The hydrogen is mixed with natural gas and burned in the gas turbine power plant to generate electricity and heat for the campus.

“This research lays the groundwork for leveraging the natural gas infrastructure already in place for the storage and transmission of renewable energy,” said Jeff Reed, director of business strategy and advanced technology at the Southern California Gas Co.

Brouwer said a team of graduate students will continue monitoring the system and conduct research in related topics – such as the effect of hydrogen transport on natural gas pipelines. They’re also looking into methanation, which takes carbon dioxide out of the atmosphere and combines it with renewable hydrogen to create a new, sustainable fuel source.

“UC Irvine's power-to-gas project is showing that there are technologies in development today that offer ways to drastically increase the use of environmentally sensitive wind and solar resources in both power generation and delivery,” said Scott Samuelsen, APEP director and professor of mechanical & aerospace engineering. “It’s particularly rewarding to see this exciting technology being implemented and evaluated right here.”