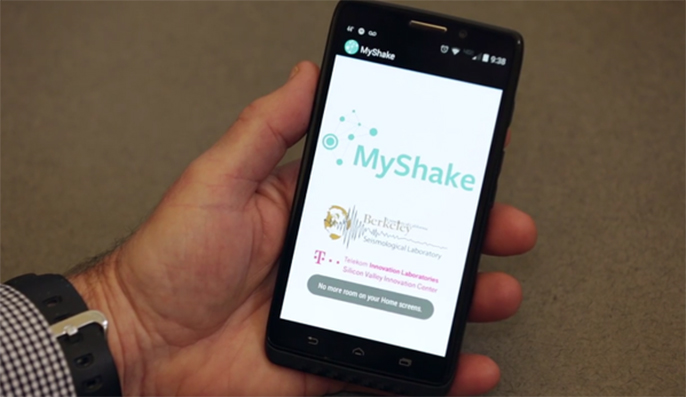 How the app works

The app continually monitors the phone’s accelerometers and tests every motion to see if it fits the profile of an earthquake. If the algorithm decides that the shaking it from a quake, it immediately sends basic information to UC Berkeley: the time and amplitude of the shaking, and the phone’s position as measured by GPS. Cloud-based software constantly reviews all incoming data and, if at least four phones detect shaking and this represents more than 60 percent of all phones within a 10-kilometer radius of the epicenter, the program confirms an earthquake. The researchers cross-check this with the California Integrated Seismic Network, which monitors earth movement all over the state using underground seismometers. After a confirmed earthquake, the app will also send five minutes of data to the researchers, starting one minute before the quake and ending four minutes after. This happens only when the phone is plugged in and connected to a wifi network.

UC Berkeley scientists today are releasing a free Android app that taps a smartphone’s ability to record ground shaking from an earthquake, with the goal of creating a worldwide seismic detection network that could eventually warn users of impending jolts from nearby quakes.

The app, called MyShake, is available from the Google Play Store and runs in the background with little power, so that a phone’s onboard accelerometers can record local shaking any time of the day or night. For now, the app only collects information from the accelerometers, analyzes it and, if it fits the vibrational profile of a quake, relays it and the phone’s GPS coordinates to the Berkeley Seismological Laboratory for analysis.

Once enough people are using it and the bugs are worked out, however, UC Berkeley seismologists plan to use the data to warn people miles from ground zero that shaking is rumbling their way. An iPhone app is also planned.

“MyShake cannot replace traditional seismic networks like those run by the U.S. Geological Survey, UC Berkeley, the University of Washington and Caltech, but we think MyShake can make earthquake early warning faster and more accurate in areas that have a traditional seismic network, and can provide life-saving early warning in countries that have no seismic network,” said Richard Allen, the leader of the app project, director of the Berkeley Seismological Laboratory and a professor and chair of the Department of Earth and Planetary Sciences. The lab operates a sensitive but widely spaced network of seismic sensors buried in vaults around Northern California

A crowdsourced seismic network may be the only option today for many earthquake-prone developing countries, such as Nepal or Peru, that have a sparse or no ground-based seismic network or early warning system, but do have millions of smartphone users.

“In my opinion, this is cutting-edge research that will transform seismology,” said UC Berkeley graduate student Qingkai Kong, who developed the algorithm at the heart of the app. “The stations we have for traditional seismology are not that dense, especially in some regions around the world, but using smart phones with low-cost sensors will give us a really good, dense network in the future.”

Smartphones can easily measure movement caused by a quake because they have three built-in accelerometers designed to sense the orientation of the phone for display or gaming. While constantly improving in sensitivity for the benefit of gamers, however, smartphone accelerometers are far less sensitive than in-ground seismometers. But they are sensitive enough to record earthquakes above a magnitude 5 — the ones that do damage — within 10 kilometers. And what these accelerometers lack in sensitivity, they make up for in ubiquity. There are an estimated 16 million smartphones in California, and 1 billion smartphones worldwide.

“Currently, we have a network of 400 seismic stations in California, one of the densest in the world,” Allen said. “Even if we get only a small fraction of the state’s 16 million mobile phones participating in our program, that would be a many-orders-of-magnitude increase in the amount of data we can gather.”

In a paper to be published in the Feb. 12 issue of the journal Science Advances, Allen, Kong and Louis Schreier at Deutsche Telekom’s Silicon Valley Innovation Center describe the algorithm in the mobile app that analyzes a phone’s accelerometer data and distinguishes earthquake shaking from normal vibrations, such as walking, dancing or dropping the phone. In simulated tests, the algorithm Kong developed successfully distinguished quakes from non-quakes 93 percent of the time. Only when the app determines that the vibration is from a quake does it briefly activate the phone’s GPS to obtain the phone’s position and push a short packet of information out through a data or wifi connection.

Allen hopes that thousands of people will download and install the app so that he and his colleagues can give MyShake a good test. If successful, he anticipates an updated app that provides early warning within a year.

He also discussed MyShake and other earthquake early warning systems during a scientific session on Friday, Feb. 12, during the annual meeting of the American Association for the Advancement of Science in Washington, D.C.

A West Coast early warning system got a big boost in this year’s federal budget when $8.2 million was appropriated to help the U.S.G.S. create such a system in conjunction with UC Berkeley, the universities of Washington and Oregon and Caltech. Allen and other seismologists gathered on Feb. 2 at the White House to discuss earthquake early warning plans and a new initiative to make all federal buildings earthquake-proof.

The goal of MyShake and a West Coast earthquake early warning system called ShakeAlert is to provide tens of seconds of warning so people can duck, cover and hold on when the shaking arrives. Video by Roxanne Makasdjian and Stephan McNally.

An early warning system along America’s earthquake-prone Pacific edge would be based on a prototype called ShakeAlert now undergoing testing in California, Oregon and Washington. In the San Francisco Bay Area, agencies such as the Bay Area Rapid Transit system already receive warnings from ShakeAlert, such as a 5-second alert after the 6.0 magnitude quake that struck nearby Napa in August 2014. At the White House meeting last week, the Gordon and Betty Moore Foundation committed $3 million to further develop ShakeAlert, and another $1 million for MyShake.

In simulated tests based on real earthquakes, MyShake was able to provide timely early warning as well as or better than ShakeAlert.

Researchers have made other attempts to harness the public’s computers or mobile phones for earthquake detection, mostly using their power-hungry connection to the global GPS network, but it has been hard to keep users, especially when software updates interfere with ease of use.

“With an app, you have access to millions of phones and the Google Play Store and Apple iTunes make is easy to distribute,” Allen said.

Allen’s long-term goal is to make earthquake detection so valuable that it becomes embedded in the mobile phone operating system, so that everyone becomes part of the network.

The algorithm behind MyShake was turned into an app by programmers at the Silicon Valley Innovation Center in Mountain View, Calif., which is part of the Telekom Innovation Laboratories (T-Labs) operated by Deutsche Telekom, owner of T-Mobile. Over the past three years, as many as a eight people helped develop the computer code that ties the sensors to the analysis algorithm, and then uploads the data to servers at UC Berkeley.

“This is really novel and inventive science, so we spent a lot of time on analysis, making sure the basics of the app were fine,” said Schreier, the vice president of the T-Labs innovation center. “We wanted an app that could collect the data needed, but wouldn’t lock up the phone, or use up all the phone’s memory, or burn out a battery, any of which would cause people not to use it.”

Kong then tested the algorithm, initially with 75 Android users from a class Allen taught, as well as friends and colleagues. T-Labs also provided phones that Kong tested on shake tables at UC Berkeley, which realistically simulate the vibrations from large quakes such as the 1989 Loma Prieta earthquake south of San Francisco.

Once the app has proven reliable, earthquake detection could trigger an alert to cellphone users outside ground zero, providing users with a countdown until shaking arrives.

“We need at least 300 smartphones within a 110-kilometer-by-110-kilometer area in order to have a reasonable estimate of the location, magnitude and origin time of an earthquake,” Kong said. “The denser the network, the earlier you can detect the earthquake.”

“Now, ShakeAlert only issues alerts when four of our traditional seismic stations are triggered,” Allen said. “But if we also have mobile phone data, maybe we would need only one station to trigger before issuing an alert.”

With a dense enough network, detection, analysis and warning can take less than a second.

“We want to make this a killer app, where you put it on your phone and allow us use your accelerometer, and we will deliver earthquake early warning,” Allen said.

Young-Woo Kwon of Utah State University is also a co-author of the paper.