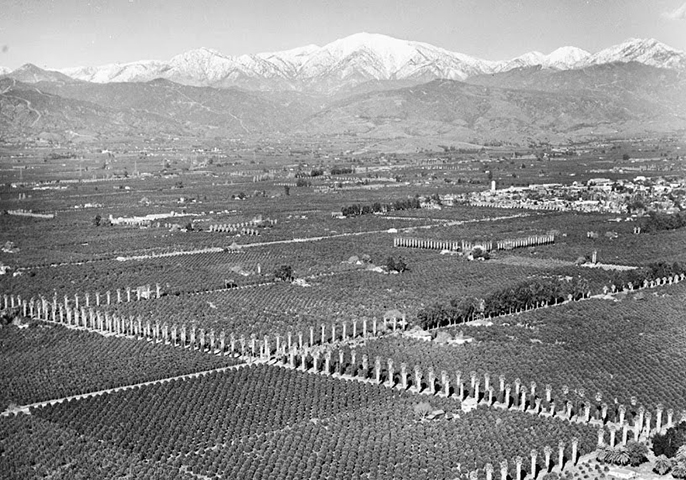 An aerial view of orange groves near Covina during World War II.

After thousands of years as a sparsely populated coastal plain, the Los Angeles Basin underwent two dramatic transformations in the last century and a half, first into an agricultural powerhouse and then into mile upon mile of wall-to-wall American dream homes, shopping centers, freeways, businesses and schools.

“We now have food deserts over what was once abundant farmland,” said Rachel Surls, UC Cooperative Extension sustainable food systems advisor. “Although Los Angeles is not unique in this regard, there's something disconcerting about the speed and scale at which Los Angeles lost its ability to produce food.”

The dramatic conversions of Los Angeles are traced and explained in a new book by Surls and Los Angeles farm and garden authority and UC Master Gardener volunteer Judith Gerber. "From Cows to Concrete: The Rise and Fall of Farming in Los Angeles," published by Angel City Press, is available on the publisher's website and from other booksellers.

Though hard to imagine when trapped in a traffic jam on the Santa Ana Freeway, under the pavement, parking lots and buildings are acres of once-productive farmland. Los Angeles County, with more than 10 million residents, now houses a quarter of California's population. But in the first half of the 20th century, Los Angeles was the top farm county in the United States.

In her role with UCCE, Surls works to encourage the newly active school, home, community and urban agricultural community in Los Angeles. She was intrigued to discover that the county now best known for Hollywood, high-rises, and luxurious homes, as well as grinding poverty and homelessness, was once a bucolic farming community. The knowledge sparked research that resulted in her seven-year collaboration with Gerber on the book.

LA's transition began when Spanish invaders came to the shore of Southern California to claim the fertile land for Spain. The Native Americans who were hunting, gathering and managing the countryside were folded, often against their will, into missions bent on civilizing the local tribes. Native Americans served as the mission's workforce. Farming at the early missions was successful.

Spanish land grants spawned vast ranchos in colonial Los Angeles that ran thousands of cattle and grew rice, corn, beans, melons and other fruit and vegetables. When Mexico won its independence from Spain, the missions' power declined and the rancheros gained influence. Many communities in Southern California bear the early ranchos' names, such as San Pedro, La Puente and Los Cerritos.

A series of developments led to Los Angeles County's designation as the No. 1 ag country in the nation by 1909. Among them were:

There was a tremendous focus on food production during World War II, but when the war ended, a flood of Americans, including many GIs with low-interest home loans, moved into the region for jobs in burgeoning industries. Between 1940 and 1960, Los Angeles completed its transition from cow-county to sprawling metropolis.

But agriculture has not disappeared, say the authors of "From Cows to Concrete." There are small pockets of agricultural land in the urban landscape, such as Richland Farms in Compton, where many people have large lots and keep horses and livestock. The new farm-to-fork movement is prompting families to cultivate vegetables in their backyards and community groups to find vacant space to produce food. LA allows residents to keep honey bees and some residents are raising backyard chickens.

“In a place where poverty is entrenched, with fruits and vegetables neither affordable nor accessible, why not use backyards, vacant lots and other open spaces to grow healthy food, right in the neighborhoods that need them,” the authors ask. “The story of agriculture in California and Los Angeles is still unfolding.”