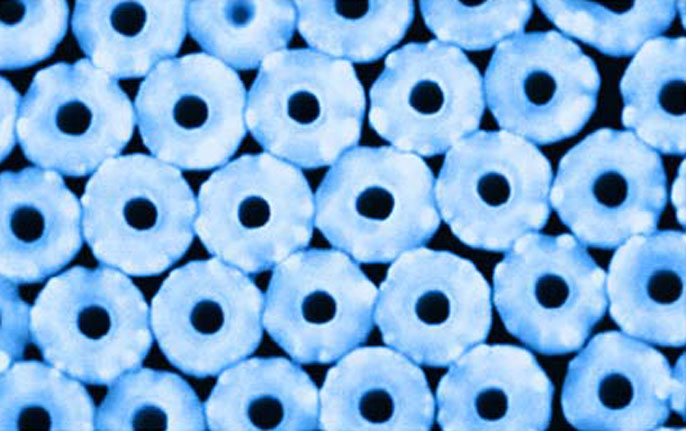 SEM images of a nanotube array (from top).

These are potential applications for a thin, flexible, light-absorbing material developed by engineers at the University of California, San Diego.

The material, called a near-perfect broadband absorber, absorbs more than 87 percent of near-infrared light (1,200 to 2,200 nanometer wavelengths), with 98 percent absorption at 1,550 nanometers, the wavelength for fiber optic communication. The material is capable of absorbing light from every angle. It also can theoretically be customized to absorb certain wavelengths of light while letting others pass through.

Materials that “perfectly” absorb light already exist, but they are bulky and can break when bent. They also cannot be controlled to absorb only a selected range of wavelengths, which is a disadvantage for certain applications. Imagine if a window coating used for cooling not only blocked infrared radiation, but also normal light and radio waves that transmit television and radio programs.

By developing a novel nanoparticle-based design, a team led by professors Zhaowei Liu and Donald Sirbuly at the UC San Diego Jacobs School of Engineering has created a broadband absorber that’s thin, flexible and tunable. The work was published online on Jan. 24 in Proceedings of the National Academy of Sciences.

“This material offers broadband, yet selective absorption that could be tuned to distinct parts of the electromagnetic spectrum,” Liu said.

A material with adjustable levels of free electrons

The absorber relies on optical phenomena known as surface plasmon resonances, which are collective movements of free electrons that occur on the surface of metal nanoparticles upon interaction with certain wavelengths of light. Metal nanoparticles can carry a lot of free electrons, so they exhibit strong surface plasmon resonance — but mainly in visible light, not in the infrared.

The materials were combined and structured in a precise fashion using advanced nanofabrication technologies in the Nano3 cleanroom facility at the Qualcomm Institute at UC San Diego. The materials were deposited one atomic layer at a time on a silicon substrate to create an array of standing nanotubes, each made of alternating concentric rings of zinc oxide and aluminum-doped zinc oxide. The tubes are 1,730 nanometers tall, 650 to 770 nanometers in diameter, and spaced less than a hundred nanometers apart. The nanotube array was then transferred from the silicon substrate to a thin, elastic polymer. The result is a material that is thin, flexible and transparent in the visible.

“There are different parameters that we can alter in this design to tailor the material’s absorption band: the gap size between tubes, the ratio of the materials, the types of materials, and the electron carrier concentration. Our simulations show that this is possible,” said Conor Riley, a recent nanoengineering Ph.D. graduate from UC San Diego and the first author of this work. Riley is currently a postdoctoral researcher in Sirbuly’s group.

Those are just a few exciting features of this particle-based design, researchers said. It’s also potentially transferrable to any type of substrate and can be scaled up to make large surface area devices, like broadband absorbers for large windows. “Nanomaterials normally aren’t fabricated at scales larger than a couple centimeters, so this would be a big step in that direction,” Sirbuly said.

The technology is still at the developmental stage. Liu and Sirbuly’s teams are continuing to work together to explore different materials, geometries and designs to develop absorbers that work at different wavelengths of light for various applications.