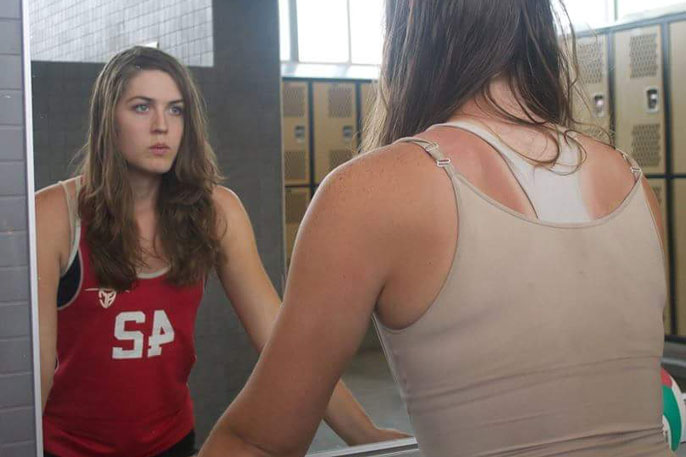 Chloe Psyche Anderson says that, since transitioning, she has finally been able to discover who she is.

Incoming junior Chloe Anderson is a different person today than she was five years ago.

Relentlessly bullied as a youngster, Anderson squeaked through high school with the bare minimum she needed to pass. She spent most of her teen years doing everything she could to not get noticed.

Today, the Orange County native is an accomplished scholar who is majoring in Russian history, with plans to go on to a Ph.D. and, ultimately, a position on a college faculty.

She’s also breaking barriers in college athletics, joining the UC Santa Cruz women’s volleyball team as an opposite and an outside hitter.

At 19, Anderson transitioned from male to female. The 24-year-old transfer from Santa Ana community college is one of the first transgender athletes to participate in the sport at the NCAA Division III level.

The physical transformation is, in some ways, small in comparison to everything else that has changed about her — namely that she is happy, embracing rather than retreating from life, pushing herself every day to work toward the ambitious goals she’s set for herself.

"Once I decided to come out as transgender, it was the first time I really started to feel good about myself," Anderson says.

Before that, Anderson said, "I had never really experienced being happy. I really was just totally lost."

As an athlete, being transgender poses particular challenges. She has struggled with coordination and muscle weakness as a result of hormone therapy, which she says also makes it harder for her to recover from injury.

She has had to confront the misconception that, as someone born male, she has an unfair physical advantage. In fact, after the hormone treatments, she said, "I probably have the least testosterone of anyone on the team."

A childhood trying to remain invisible

Growing up, Anderson didn’t quite understand what made her different.

As a preschooler, she loved dress up and playing princesses. She had plenty of playmates, most of them girls.

Then shortly before kindergarten, something changed. She became the target of insults and bullying. "I started getting beaten up almost every day," said Anderson.

She soon retreated from peers and classmates, often pretending she was sick in order to stay home.

By middle school, Anderson regularly got Ds and Fs. Although she tested well, she was listless about her classes and made little effort to complete the assignments. At home, she mostly stayed in her room playing video games and working on the computer.

Her main objective: stay off the radar.

"I didn’t want anyone to notice me," she said. "I did everything in my power to be invisible."

There was one bright spot, though. On the volleyball court, Anderson found a pursuit she could get excited about.

Although she was always last in running and stair-climbing drills, she would practice for hours on her own — bouncing the ball against the wall, jumping up stairs and juggling to improve her strength and coordination.

The day it all made sense

Then one day in junior year, the class watched a film about transgender kids.

For Anderson, it was a revelation.

"I just started crying right there at my desk. It was the most incredible thing — to realize all my feelings had a name."

Anderson began doing research and came to the realization that she had always, deep down, identified as a woman. She made the decision to come out to her family and begin taking the steps to make a physical transition.

She also chose a new name for herself: Chloe — from a Greek word that means beginning to blossom.

She lost friends and her job as a tutor in an after-school program. Her family struggled to accept the decision.

Volleyball was her one constant. Even as her body was changing, the sport gave her motivation to keep focused.

She set herself a goal: to play women’s volleyball at the college level.

She practiced hours a day, every day and finally tried out for Orange Coast College. She was the last person to be cut from the team.

She cried for a while — then dusted herself off and followed up on the advice of a friend, who told her that Santa Ana was still recruiting.

“The coach said. "Come on over tomorrow. I’ll show you the gym. He wanted me immediately. The fact that I’m trans didn’t matter at all. He saw me for my athleticism and for how I played."

Fast forward to today: Anderson arrived to her new home at UC Santa Cruz two weeks ago to begin fall training, with practice that goes for six hours a day, six days a week.

Her teammates have welcomed her as a fellow athlete. "They’re silly and goofy, and make me laugh."

What they don’t make her feel is different. "Our coaches really emphasize that everyone is there for each other. It’s all about loving each other and supporting each other as a team.”

She has fallen in love with Monterey Bay, the thickets of redwoods, and the deer that come up almost close enough to touch.

Having already gotten settled in her dorm room — in a newly opened housing unit for transgender students — she’s looking forward to being just like everyone else around her.

As an older student and someone several years into her transition, she hopes to be able to provide perspective that can help younger students.

"Transition is scary.  It can be hard financially, emotionally and physically," she said.

“But since I took that step, my whole life went in the right direction.”

She’s eager to experience what the university and Division III volleyball have to offer. But, in some ways, she’s already gotten what she’s always wanted: to be an ordinary person, enjoying life and excited about the future.