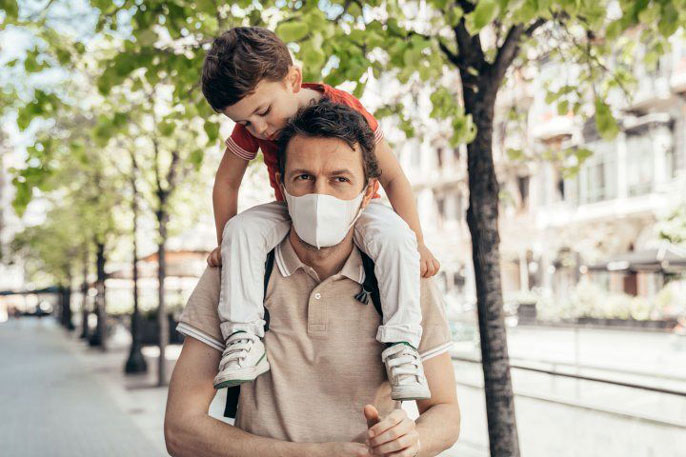 As more and more states promote face masks as a way to control the spread of COVID-19, the top-line message has been: wear a mask to protect others. While it’s true that most face masks are more effective in preventing you from launching droplets into the air than breathing in already dispersed droplets — that doesn’t mean masks offer no protection to the wearer.

It’s likely that face masks, by blocking even some of the virus-carrying droplets you inhale, can reduce your risk of falling seriously ill from COVID-19, according to Monica Gandhi, M.D., an infectious disease specialist at UC San Francisco.

“The more virus you get into your body, the more sick you are likely to get,” she said.

In the latest wave of infections in the U.S., the wider use of masks may be one factor for the lower death rates — along with more testing, younger patients and better treatments — said Gandhi. A greater proportion of these new cases have been mild or asymptomatic, though more data is needed to see if they track geographically with higher rates of mask-wearing.

These epidemiological observations are among the evidence that Gandhi and colleagues cite in a paper in the Journal of General Internal Medicine, in which they propose that masks can lead to milder or asymptomatic infections by cutting down on the dose of virus people take in.

“Masks can prevent many infections altogether, as was seen in health care workers when we moved to universal masking. We’re also saying that masks, which filter out a majority of viral particles, can lead to a less severe infection if you do get one,” said Gandhi. “If you get infected, but have no symptoms — that’s the best way you can ever get a virus.”

Not a new idea

The idea that viral dose, also known as viral inoculum, determines the degree of illness is not new, said Gandhi. Descriptions of a dose-mortality curve — how much of a virus is needed to cause death in an animal — were first published in 1938. And after all, the earliest vaccines, which were documented in 16th century China, involved exposing someone to a small amount of smallpox virus to induce mild illness and subsequent immunity.

A small number viral particles is more likely to be quelled by the immune system before they can proliferate, said Gandhi.

Researchers have studied dose dependency experimentally with other viral infections, like the flu. In a study with healthy volunteers, those who received a higher dose of the influenza A virus developed more severe symptoms.

Because the new coronavirus, SARS-CoV-2, is potentially lethal, experiments on masking and disease severity have been necessarily limited to animals. In a hamster study, a surgical mask partition between the cages of infected and uninfected hamsters significantly cut COVID-19 transmission. Fewer hamsters caught the virus and those that did showed milder symptoms.

Gandhi believes the viral inoculum theory helps explain an unusual feature of the new coronavirus — what Anthony Fauci, M.D., director of the National Institute of Allergy and Infectious Disease, has called its “protean” manifestations.

Early in the year, as COVID-19 spread around the world, infectious disease experts began to notice this strange aspect of the new virus — the extreme variation in its symptoms and severity. Some who tested positive didn’t seem sick at all, some had symptoms of a cold, others lost their sense of taste or developed delirium, and still others suffered severe pneumonia that led to death.

Experts quickly focused on differences among patients, such as age and co-morbidities, that can affect their chances of severe illness. But the details of two outbreaks on cruise ships spurred Gandhi to think that viral dose could be another important determinant of the course of the new illness.

“We’re also saying that masks, which filter out a majority of viral particles, can lead to a less severe infection if you do get one. If you get infected, but have no symptoms — that’s the best way you can ever get a virus.”
– Monica Gandhi, M.D.

In February, one of the first outbreaks of COVID-19 outside of China occurred on the Diamond Princess cruise ship docked in Yokohama, Japan. Of the 634 people on board who tested positive, about 18 percent of infections were asymptomatic. In March, an Argentinian cruise ship found itself in a similar predicament, but of the 128 people on board who eventually tested positive, 81 percent were asymptomatic.

A key difference, Gandhi noted, was that on the Argentinian ship, surgical masks were issued to all passengers and N95 masks to all staff as soon as the first passenger became sick.

To Gandhi, these case studies suggest that if more people wore masks, we could see less serious illness from COVID-19 and a higher proportion of asymptomatic cases, currently estimated to be around 40 percent of cases by the Centers for Disease Control and Prevention. Milder infections would ease the burden on the health care system, save lives, and even nudge us closer to herd immunity before a vaccine becomes available, said Gandhi.

And it means that the public health message on masks can appeal to more than altruism.

“We messaged that mask wearing will protect other people, and that did not seem to convince our country as much as we would have hoped,” said Gandhi. That’s not surprising given human nature, she said. “If you think something’s going to help you or your family, you are going to do it more than if you think you’re helping others.”