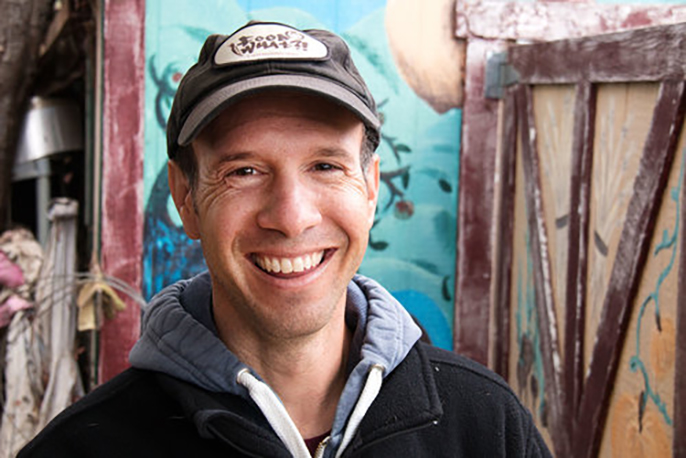 Doron Comerchero is the founder and director of FoodWhat.

Doron Comerchero, founder of the nonprofit FoodWhat, uses sustainable food and farming as a way to empower struggling and low-income youth in Santa Cruz County.

For the past decade, he and his staff have worked hard to provide them with healthy food, meaningful work and a supportive community.

Now, his labors, outreach and vision are getting the recognition they deserve. Comerchero, 40, is the ninth recipient of the annual Tony Hill Award, a prestigious honor that is given to bridge-builders and community organizers who embody the spirit of the late social activist Tony Hill.

Hill, a longtime advocate for social and economic justice in Santa Cruz County, was known for his skills as a mediator. He died in 2007 at age 62.

Melanie Stern, Tony Hill's widow and a member of the award selection committee, said that America needs people like Comerchero more than ever these days. “We find ourselves in very challenging times,” Stern said. “Doron Comerchero's FoodWhat is more of what we need: innovative solutions, sustainability, passion and hope.”

Stern also praised Comerchero’s unique approach to social justice issues. “FoodWhat provides opportunities for young people to discover more about themselves through their connection with the land, through fostering new capabilities and hope for the future,” she said.

“It was incredible to receive the call from Melanie,” said Comerchero in an interview before the convocation. “I felt like our decade of work, serving youth from a place of equity and empowerment, was really being seen.”

The nonprofit has a distinctive and instantly recognizable logo, featuring a carrot, a tomato and the words “FOOD WHAT?!” in oversized letters. This organization has deep roots at UC Santa Cruz. Comerchero was an apprentice with the campus’s Center for Agroeceology & Sustainable Food Systems in 2004, and stayed on for a second year in 2005.

His nonprofit now operates in two locations — on a small parcel of land at the UC Santa Cruz Farm, and at another parcel at Farm Discovery at Live Earth Farm on Green Valley Road in Watsonville.

The convocation crowd, including a large contingent of youth who have worked with the nonprofit, gave him a rousing welcome as he approached the podium. Comerchero noted that 2007, the year that Tony Hill died, was also the year his organization launched. “Somewhere I trust in my heart that Tony has been sharing his spirit, his passion and his wisdom with us,” he said.

“How do we empower youth?” said Comerchero. “The answer is we don’t. Our job, as staff, is to create an environment for youth to experience their own success.”

He also noted that empowerment meant something different to each young participant. “This gives them a place to heal from past traumas, to see that they are not their past experiences, to explore their identities that many have not had the space to do so at home.”

The food grown on-site at FoodWhat is prepared and consumed in daily healthy meals by youth participants. Shares of youth-grown produce grown goes home with the youth and their families, and is used to support youth-run low-income farm stands in both sides of the county.

“That is part of the magic,” Comerchero said. “Many youth at FoodWhat experience radical diet change, from consuming junk food and soda to fresh fruit and vegetables. And this is just one part of their incredible personal growth and transformation from their time at FoodWhat.”